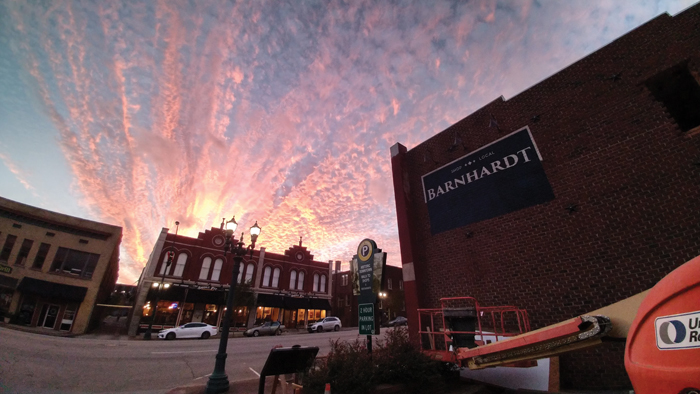 SALISBURY — Goosebumps crept up Josh Barnhardt’s arms as he watched the sign be illuminated for the first time.

“It came out even better than we even imagined, so we were over the moon about it, honestly,” Barnhardt said.

The gold and black painted sign, designed by Mandi Boedicker of Dry Ink Designs, was commissioned by Barnhardt to commemorate the opening of Barnhardt Jewelers in downtown Salisbury. After selling jewelry at its location in Spencer for years, the store made the move to its newly renovated building at 112 E. Innes St. and opened last month.

The new Barnhardt Jewelers sign, painted on the eastern facing wall of the building, made its debut just a few days before the store opened for business in November.

“We invested in this building and this space so we plan to be here in this location in 20 or 30 years and so we want the sign to be part of the building and our jewelry store for decades to come,” said Barnhardt, who works for a company in Charlotte but led the renovation.

When Barnhardt started searching for someone to paint the sign, the right person for the job quickly became clear.

“Looking for an artist to paint the sign, everything kept coming back to Earle Kluttz Thompson,” Barnhardt said. “She’s done a lot of restorative work around Salisbury.”

Thompson, the daughter of former Salisbury mayor Margaret Kluttz, grew up in Salisbury before attending college at UNC. During her time at Chapel Hill, she learned how to paint murals under the tutelage of muralist Michael Brown. Now living in Raleigh, Thompson runs a design and painting business with her sister-in-law Raines Thompson Kuppin. 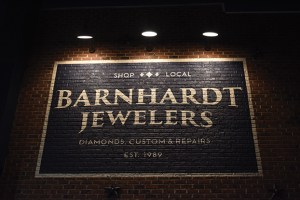 The duo is known for painting murals on the walls in the UNC Hospitals in Chapel Hill, but Tompson has also restored and painted vintage signs on buildings in downtown Salisbury. Nearly decades ago, Thompson began restoring several Cheerwine signs like the one at New Sarum Brewing.

Thompson said that it “makes her feel good” to come back to Salisbury to paint, so it was exciting when Barnhardt approached her with the job.

“Even though I live in Raleigh, I do feel like Salsbury is still my home. It’s my heart,” Thompson said. “I always like to give back to the community as much as I can.”

Needing to get paint on the wall before the weather turned too cold, Thompson painted the sign over the course of just four days in mid-November. From sun up until sundown on Saturday, Sunday, Monday and Tuesday, Thompson stood on a construction lift and transformed an 8-by-13 foot portion of the building into the gold and black Barnhardt emblem. 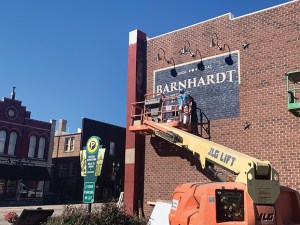 Painting almost non-stop for four days left Thompson’s arm sores for days after she finished, but she said that it’s always worth it to put something back into the community.

“A lot of the signage around Charlotte, there are some really neat and historic ones,” Barnhardt said. “That was really my inspiration when I saw Legion Brewery or others and they had some nice painted signs. When I saw those, I said ‘That’s what I want on the building.’”

That’s exactly what Thompson set out to accomplish.

“I painted it in a weathered look,” Thompson said. “I didn’t fill in every single crack and crevice. I let some of the brick show through.”

Many of the downtown painted signs that Thompson has done have been partial restorations, where she has a faint line or image to go by. Since the Barnhardt sign was brand new, there were no guide rails.

“There was a lot of measuring and leveling the next day once I had drawn it out to make sure I’d drawn it correctly the night before,” Thompson said. “It being a new sign, I had to make sure it looked right because usually I have my lettering to go by.” 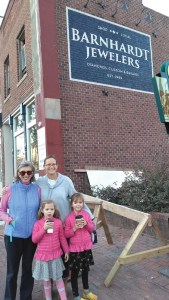 Earle Kluttz Thompson poses with her mother Margaret Kluttz and her daughters in front of the sign she painted. Photo submitted.

Josh Barnhardt said that he and his mother, Debbie Barnhardt, who runs the day-to-day operations of the store, were impressed with Thompson’s work.

Although Thompson saw the finished painting in daylight, she wasn’t able to stick around until the sun went down to see it illuminated by hanging bulbs at night.