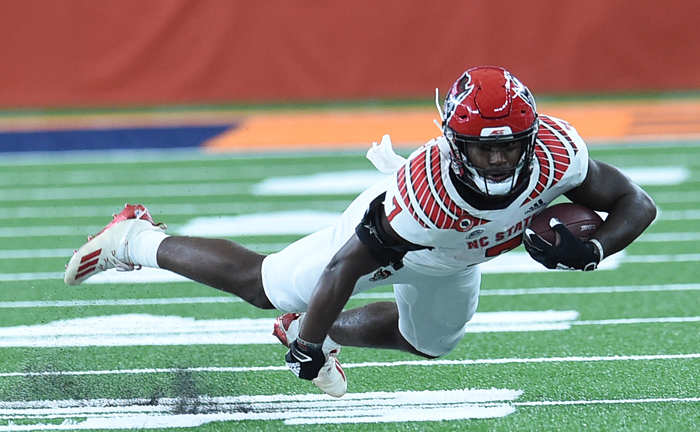 North Carolina State and Georgia Tech are proving it’s possible to find positive results in a season made difficult by the coronavirus pandemic.

It has been a rewarding season for eighth-year N.C. State coach Dave Doeren.

Doeren says the Wolfpack learned from last year’s overall 4-8 season. The last-place finish in the ACC’s Atlantic Division at 1-7 raised questions about the direction of Doeren’s program.

“To go from one ACC win to wherever we end up … that’s pretty damn good,” Doeren said.

An offense installed by new coordinator Tim Beck has provided a jolt even after losing starting quarterback Devin Leary to a leg injury.

“It’s a been a fun year,” Doeren said. “It’s a special group. And obviously if we can get this next one and put us at eight (wins), that would make it even better.

“But going into the year, had you told me we were going to deal with not only the COVID but the number of injuries that we had, and that we would win this many games, I’d probably laugh at you.”

Georgia Tech, in its second season with coach Geoff Collins, has been led by freshman quarterback Jeff Sims, who threw for three touchdowns and ran for 108 yards in the win over Duke.

A win over N.C. State would add more momentum to Collins’ plan to build a winner in Atlanta.

The win over Duke followed a four-week layoff that included postponed games against Pittsburgh and Miami.

The Wolfpack has never won more than six ACC games in a regular-season schedule. A win Saturday would mark the first time with seven, though it comes as the league moved to a 10-game schedule due to the coronavirus pandemic instead of its more traditional eight-game set.

“The bottom line is we didn’t choose how they set this thing up this year,” Doeren said. “We didn’t pick who we play. We didn’t get to pick any of it.”

Georgia Tech offensive coordinator Dave Patenaude worked on the sideline instead of from a coach’s booth against Duke for the first time this season. He said he liked having the more direct communication with Sims and will work on the field again this week.

“It’s a different game when you’re on the field,” Patenaude said. “For me, I personally like being on the field. I like being in the mix. … I think it’s easier to be impactful, certainly on the quarterback, but able to impact all the groups.”

N.C. State has won five games this year when trailing in the second half, including the win over Liberty and a rally from nine down in the third at Syracuse.

In the team’s seven wins, N.C. State has outscored opponents 114-84 after halftime.

The Yellow Jackets already have topped their ACC win total from 2019, when they were 3-9 overall and 2-6 in conference games to finish last in the Coastal Division.

Georgia Tech’s 28-26 home win over the Wolfpack last season ended a streak of six straight wins by visiting teams in the series. Georgia Tech has won in each of its last five visits to Raleigh.

Duke gets No. 9 Miami in newly scheduled game

The Hurricanes travel to Duke on Saturday night for their first game since beating Virginia Tech on Nov. 14. It’s the latest among multiple changes to the Atlantic Coast Conference schedule for the Hurricanes, who had spent recent weeks dealing with positive COVID-19 tests and quarantines.

“These kids want to play. They want to finish the season,” Miami coach Manny Diaz said. “You don’t ever know … with what we went through (with the virus) and what you see going on around the country.”

Miami (7-1, 6-1 ACC) was set to visit Wake Forest on Saturday, but the Demon Deacons recently paused football activities due to their own coronavirus concerns. The ACC revised the schedule Sunday for Duke to host Miami instead of Florida State this weekend.

Miami is trying to keep alive its slim hopes of reaching the ACC title game. The Hurricanes must win out and see Clemson lose at Virginia Tech this weekend for Miami to meet No. 2 Notre Dame.

It’s easy to see how Miami might not be razor-sharp Saturday night, too, considering it’s had essentially two weeks away from football amid coronavirus issues along with players having exams this week.

“The players have to understand that there’s adversity, more of a difference in preparation for this game than any other game that they’ll ever play or that I’ve ever been a part of,” Diaz said.

Like Miami, the Blue Devils (2-7, 1-7) played just twice in November. Their Nov. 21 game against Wake Forest was canceled amid the Demon Deacons’ combination of positive tests, quarantines and injuries. Duke lost 56-33 at Georgia Tech last weekend.

“We’ve been healthy all year, we’ve been available,” Duke coach David Cutcliffe said. “And I think that’s part of what’s happened: a lot of people have had a lot of issues with COVID-19. So we’re up and ready, and our team enjoys the challenges and the opportunities to play.”

Some other things to know about Saturday’s Miami-Duke game:

Miami could get several chances to break out its turnover chain considering Duke has been the nation’s worst team at protecting the football. The Blue Devils have lost 30 turnovers, at least six more than any other Bowl Subdivision team.

The elimination of divisions for this season created some ACC schedule quirks, and adding this game is just another example. By sending Miami to Duke this year, it raises the chance that the Hurricanes will go to Durham in three consecutive seasons — they lost there last year in their regular-season finale and the current grid for the 2021 schedule has Miami visiting again. Still, it’s not unheard of; Virginia played at Miami in 2019, went back this season and is slotted to again next fall.

This is the second regular-season game for Duke in December in the last 59 seasons; the other in that span was a 59-31 loss at Clemson on Dec. 1, 2001. That game was to have been played in September and was rescheduled after the Sept. 11 terrorist attacks that year.  The last December home game for Duke was Dec. 2, 1961, a 37-13 win over Notre Dame.

Miami hosts North Carolina on Dec. 12 followed by Georgia Tech on Dec. 19, though that game won’t be played if the Hurricanes qualify for the ACC championship game. Duke now visits Florida State on Dec. 12.

North Carolina is finally playing the nonconference game that coach Mack Brown believes could have given him a chance to develop more young Tar Heels players. UNC hosts Western Carolina from the Championship Subdivision on Saturday. The game replaces one against Charlotte from September.t Tat game canceled after COVID-19 quarantines depleted the 49ers offensive line group.

Brown has lamented losing that early give season date multiple times since it would’ve allowed the Tar Heels (6-3) to test younger players and reserves with more game reps and build program depth. They get that chance now, sandwiched between late-season games against No. 2 Notre Dame and No. 9 Miami.

“And people will say, ‘Well this game’s not important.’ Well, try to lose it. And then it becomes important.”

The Catamounts (0-2) are closing a three-game set of fall-semester games that began with a loss at nationally ranked Liberty on Nov. 14. The Southern Conference program will play its league schedule in the spring due to the coronavirus pandemic.

“With so many young players, some of it is just these three games, it’s worth seeing what we’ve got,” said Western Carolina coach Mark Speir, a former A.L. Brown player. “It’s all about us. I don’t talk a lot about Carolina. Our players know. They sit there and watched Carolina play Notre Dame. … What I’ve got to keep their minds on is: what this is about this week is us getting better, us growing, us developing.”

Western Carolina has lost all 57 games against Bowl Subdivision opponents, including all 31 against Atlantic Coast Conference opponents.

The Tar Heels are coming off a 31-17 loss to the Fighting Irish, who locked down on the Sam Howell-led prolific offense after the opening quarter. But UNC’s defense helped the Tar Heels hang around until giving up a clinching late touchdown.

“I think we communicated better,” UNC defensive coordinator Jay Bateman said. “I thought we defended the run better. I thought we were more consistent in our in our run fundamentals. … I think we can play a lot better.”

Penalties remain a bigger problem for UNC. The Tar Heels are 121st out of 127 teams in the FBS ranks with 72 penalties, while the team’s 76.78 penalty yards per game ranks 117th. They had nine penalties for 90 yards against Notre Dame, including a chain-moving offsides call as the Fighting Irish lined up to go for a fourth-and-1.