CHINA GROVE — In lieu of a sleigh, Santa Claus will be riding a bright red fire truck through the streets of China Grove two weekends leading up to Christmas.

As part of the new event, Santa will make his first rounds around the west side of China Grove starting on Shue Road at 10 a.m. on Saturday.

Santa will visit the east side of China Grove the next weekend, starting his route on Coach Deal Lane at 10 a.m. on Saturday, Dec. 12. 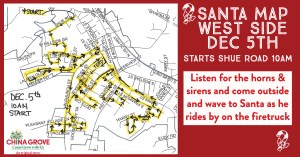 On Saturday, Dec. 5, starting at 10 a.m., Santa will make his rounds through the western portion of China Grove. Click or tap on the image to view a larger version.

When residents hear the sounds of horns and sirens, they are encouraged to step outside and wave to the merry elf as he drives by. China Grove Town Manager Ken Deal said that it will take about an hour for Santa to make his way through each of the routes. 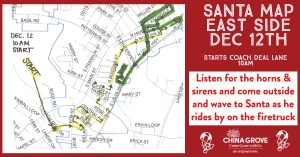 On Saturday, Dec. 12 starting at 10 a.m., Santa will make his rounds through the eastern portion of China Grove. Click or tap on the image to view a larger version.

The two-day, drive-by Santa Claus event is the latest pivot for China Grove as the town attempts to bring holiday cheer to its residents in a safe way. China Grove canceled its joint Christmas parade with Landis last month in adherence with Gov. Roy Cooper’s orders that limited gatherings through Dec. 4. The town has also not officially announced whether it will host its annual Christmas in the Grove event.

Deal said that the Santa event will allow residents to enjoy something in “the safest environment possible.”

“Given the current state of affairs, we think it’s critical to provide our citizens with some holiday cheer,” Deal said. “The town board members are adamant about providing activities for our citizens year round.”

As opposed to the nearly 20 community events that the town hosts in a normal year, there have only been a handful of events in 2020.

Santa won’t be the only holiday figure to have ridden through the streets of China Grove atop a fire engine this year. The town hosted a similar event in the spring for the Easter bunny, which Deal said was a success.

In addition to the Santa Claus event, China Grove is hosting an outdoor Christmas decorating contest this year.

Open to all residents inside city limits, the contest will give out prizes for those who have the most dazzling light displays in the area. Members of the town’s parks and recreation department will judge entries and $100 prizes will be awarded for each category winner. The four categories include: Most Original, Clark Griswold (“over the top lights!”), Most Beautiful and Oh Holy Night (“traditional, spiritual”).

Entries for the decorating contest will close at 5 p.m. on Dec. 7 and houses will be judged on Thursday, Dec. 17 between 6-9 p.m. All lights and decorations must be displayed by then and only exterior decorations will be considered. The registration form for the contest can be found at www.chinagrovenc.gov.