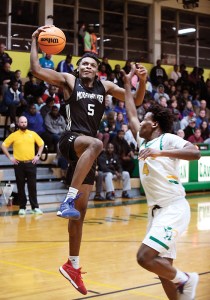 Josh Hall didn’t hear his name called in the NBA draft, but he signed with the Oklahoma City Thunder not long after the two-round affair concluded late Wednesday night.

The Thunder signed Hall, who played a postgraduate high school season at Moravian Prep, to a two-way contract.

Hall, who turned 20 in October, had been committed to North Carolina State but withdrew to enter the draft. The 6-foot-9 wing led Moravian Prep to a 34-3 record in 2019-20.

Hall was signed to a two-way contract, meaning his salary will  be dependent  on whether he’s playing for the Thunder or for the  Oklahoma City Blue, the Thunder’s NBA G League affiliate.

On the last swing of Catawba’s fall season, Tanner Bibey made a hole-in-one on the 215-yard No. 9 hole at the Country Club of Salisbury.

Bibey hit a 5-iron. He was playing  with AJ Boyd, Riley Smith  and Hunter Donahue.