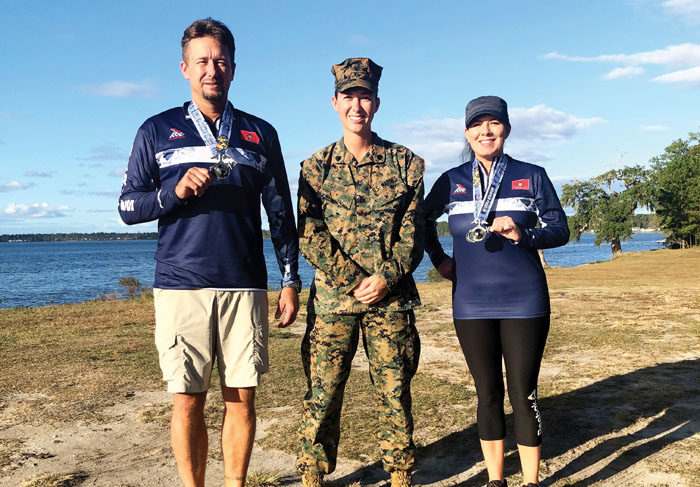 Sometimes circumstances come together for something big. That’s just what happened for Lorie and Mark Cauble over an incredible month. I got to play a small part in this journey and it’s certainly worth sharing.

Lorie started running with the 2014 Greenway 5K where her second-place age group finish led to lots of other 5Ks and another second-place finish in her age group in an 8K. She pushed it up a notch and competed in the Mayberry Half Marathon followed by her first marathon in Myrtle Beach in March 2019.

Mark started running when he enlisted in the Marine Corps in 1990. Nearly every day for almost nine years, Mark ran at least three miles a day. After ending his active duty in 1999, he quit running all together.

After getting married in November 2019, Mark and Lorie were already enjoying long hikes when Mark mentioned doing the Marine Corps Marathon together. He said, “2020 would be a great time to do this because our daughter, Jenna Cauble, had been in the Marine Corps for six years already and was finally going to be stationed close to D.C. around the marathon date.”

The Caubles found out that a lottery was required to even get into the event. They both applied and a few weeks later were selected to run the 45th MCM. Lorie said, “That was a great day! We were both so excited! Then, reality started to set in, and we were on the clock to get ready. Sometime after the virus shutdowns, we learned the event would be virtual. We were bummed at first but decided to embrace this opportunity to improvise, adapt, and overcome.”

The MCM organizers also offered another opportunity to do a Trifecta, not only the marathon but a 10K and 50K. All would be virtual, meaning that Mark and Lorie could do the distance on any course within the month of October. Mark said, “Why not? We decided to go big or go home. We may never get this chance again.”

They did the 10K (6.2 miles) in Salisbury on Oct. 3, a day already scheduled for a long run, and then tacked on another 12 miles for training.

The marathon (26.2 miles) followed on Oct. 17. Mark said, “It would have been nice to run in D.C. and finish at the Marine Corps Memorial, but we got the next best thing. Our daughter, Sgt. Jenna Cauble, enlisted some help from her former commanding officer Capt. Kristen Baldwin (five-time MCM participant) to help us facilitate our run. They really motivated us and made it a memorable and special occasion.”

And finally the 50K in Virginia. Just five days after the marathon, was completed on the Virginia Creeper Trail on Oct. 22. Lorie said, “No pressure, just us and the mountain. This was a disaster! We had no trail experience, and it was our first time running with hydration packs and we had no support. We are glad it’s done, but you probably won’t see us on a trail again for that long.”

Mark added, “The biggest and most important takeaway is how much we love each other and share so many similar interests. We got up on weekends to do long runs at 3 a.m. to drive an hour and then run to avoid the sun and summer heat as much as possible. Nothing beats seeing the sun rise while running alongside a river with the person you love. We depend on each other for motivation, especially on a morning when one of us didn’t want to run. In the end, we drove each other across the finish line and have the rest of our lives to continue pushing each other to be better.”

Lorie concluded, “We found difficulty in juggling everyday life and staying on a grueling schedule with sometimes painful tasks, making the journey all the more rewarding when finished.” They plan to do mainly 5Ks and 10Ks while Mark needs a half marathon and an 8K to match Lorie.

Rowan’s next race is the always popular Butterball 5K on Thanksgiving morning, held this year at Salisbury Community Park. Look for this and other upcoming races at www.salisburyrowanrunners.org .