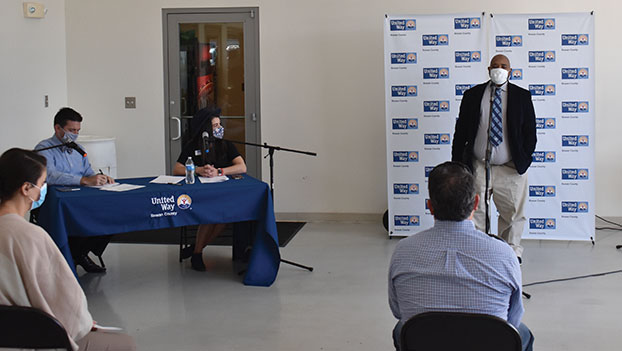 One Love Services Executive Director Steve Wideman thanks the Rowan United Way for its support during the progress report meeting on Wednesday. Ben Stansell/Salisbury Post

SALISBURY — An anonymous donor could prove to be the difference maker in the Rowan County United Way’s campaign to reach its $1.5 million fundraising goal.

At the United Way’s third report meeting at Cloninger Toyota on Wednesday, Campaign Chair Andrew Smith and Executive Director Jenny Lee announced that the campaign has received a pledge from an anonymous donor that he will match 50 cents to every dollar that is donated from this point to the end of the campaign.

“It’s going to be huge,” Smith said. “That is going to be our force multiplier in that every dollar we get is a half a dollar back. The anonymous donor did it to try to encourage folks to say ‘Listen, we’ve got to meet our goal. We really need your support. Let me help multiply your efforts. When you give a dollar, you get $1.50 in return.’ It’s a super generous gift.”

Several campaign divisions have almost reached or have reached their fundraising goals. The community business division has surpassed its target of $10,000 having raised $10,861. The “chairmans,” “commercial two,” “public employees” and “special gifts” divisions are at or over 85% of the way to their individual fundraising targets.

One Love Community Services Executive Director Steve Wideman spoke about how much the United Way’s support benefits the behavioral services provider. One Love, a statewide organization, was able to expand to provide services in Rowan Country with the assistance of the United Way.

“We started off with United Way about a year ago with the impact program trying to figure out how to service individuals who can’t afford it,” Wideman said. “… With the help of United Way, the funding we get is extremely important to providing services.”

During the report meeting, Lee took a moment to remember Paul Fisher, the Salisbury banking icon and philanthropist who died Friday afternoon from pancreatic cancer.

“(Fisher) was a United Way champion,” Lee said. “I focus on the United Way because I’m a representative of our local United Way, but going beyond the United Way, he was a pillar of our community and touched so many lives. His legacy will continue to go on and on.”

Lee ended the reporting meeting with a call to action as the campaign enters its home stretch.

“We set this pretty ambitious goal of $1.5 million and Andrew (Smith) continues to remind me we’re in the middle of a pandemic with this large goal,” Lee said. “It’s not just a number. It’s so much more than that. It equates out to lives — lives living, lives lost. If we do not make this goal, those services that you’ve learned about throughout this journey with us don’t receive funding. It is so important to encourage companies, friends and families to share the United Way message.”

The campaign finale will be held on Nov. 20. Smith said that they are still ironing out the details on where it will be held and what the event will entail. Typically, hundreds of people have shown up to the event to celebrate the end of the campaign and to see which donor will win a new car — the biggest prize of the campaign. With COVID-19 health and safety guidelines limiting capacity still in place, this year’s finale will be different while still serving as a celebration.

Smith is confident that the United Way will be able to announce that it has reached its goal at the finale on Nov. 20.

“I am feeling optimistic, mainly because I know the folks in this community and I know that no matter what, we seem to always get there,” Smith said. “It’s always unique and different every year, but I have faith in our community. We’ve always done it and we’ll do it again this year.”

Holiday 2020 issue of Salisbury the Magazine is now…