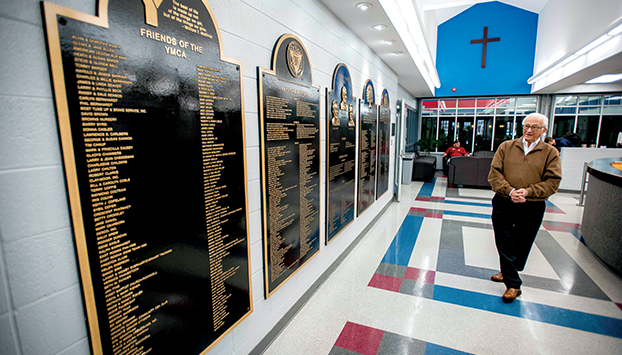 SALISBURY POST FILE PHOTO - Paul Fisher in February 2019 reflects on all the donors that made the East Rowan YMCA dream a reality.

Under Fisher’s guidance, which passed on to his son Steve in 2014, F&M Bank became the most dominant financial institution in Rowan County. By its 100th year in business in 2009, the company had 25% of the bank deposits in Rowan while also establishing a two-branch foothold in Cabarrus County.

For decades, Fisher served as president, chief executive officer and chairman of F&M. Over the years, the Fisher family assembled 50% of the bank’s stock, with many other people — 90% of whom are Rowan Countians — owning the other half.

The combination has allowed F&M to remain an independent community bank that is locally owned.

As much as Rowan Countians identified him with F&M, Fisher might have been better known for his warm heart and as a chief catalyst through the decades for local fund-raising efforts.

Most recently, Fisher worked tirelessly on promoting and raising money for Bell Tower Green, a $12 million park under construction in downtown Salisbury.

But it also was Fisher who spearheaded efforts to build the Saleeby-Fisher YMCA in eastern Rowan County, the Rowan County Chamber of Commerce’s Gateway building and a new Rowan Helping Ministries shelter. He sought support for the Educational Foundation for Rowan-Salisbury Schools, and he and F&M played prominent roles in capital projects for the Norvell and Meroney theaters, Waterworks, Catawba and Livingstone colleges, Novant Health Rowan and myriad other causes throughout Rowan.

In an interview with Salisbury the Magazine in 2019, Fisher said he often saw himself as a captain for “passionate teammates.” He made a lot of his points through personal stories, often examples of when the bank helped customers and how, in turn, they repaid the community with what he liked to call miracles.

Rowan County’s Community Care Clinic named him Humanitarian of the Year in 2001, one of many professional and community awards Fisher received throughout his life, but probably the one which summed him up best.

“He knows everyone in Rowan County, it seems, and so many people know him and love him and know how committed he is to the community,” Ed Norvell said in the 2019 magazine story.  “It’s hard to turn him down. He gets so excited. He wouldn’t take on a project he didn’t believe in.”

Norvell and Fisher, who were next-door neighbors in Salisbury, worked together as the chief fundraisers for Bell Tower Green.

Since his retirement, Fisher was chairman emeritus at F&M, and until his illness, he still put in about 25 hours a week for the bank’s foundation and its community initiatives.

“I learned not to be bashful in asking,” Fisher said in 2019. “I learned that you ask for an investment — not a gift or donation or contribution. I also learned fair-share giving. You give in proportion to what you have.”

Several times a year, Fisher used to “teach” the orientation class for new F&M employees, and the session was held at the handsomely restored original Farmers & Merchants Bank building in Granite Quarry.

At these sessions, Fisher stressed the importance of high ethics and morals, confidentiality, team play, 110 percent effort and meeting the challenge of tough competition. 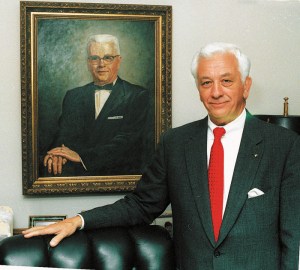 ‘Little bank on the corner’

Fisher always found great meaning and symbolism in the original bank, located at Old Highway 80 and Bank Street. He liked referring to it as the “little bank on the corner.”

“Every company has a personality to survive,” Fisher told the new employees at one of the orientations. “You need to learn that personality so you can get on board as quickly as possible.”

In a forward to a book written for F&M’s 100th year in business, Fisher said, “That tiny building and the principles it represented stood solidly in good times and bad, setting the foundation for 100 years built on honesty, integrity and hard work.”

Beyond those standards, Fisher wanted the bank to offer something else: hope.

“Hope for the customers who have come through our doors with the dream of setting their crops in the field, sending their children to college, starting their own business, saving for their retirement and more,” Fisher said.

“And hope for the communities who put their faith in us, as we put our faith in them.”

Paul Fisher graduated from Granite Quarry High School and, in 1960, from the University of North Carolina at Chapel Hill.

His father, J.E. Fisher Sr., was hired as a teller for Granite Quarry’s Farmers & Merchants Bank in 1914, and that launched a distinguished 50-year career with the company as the bank’s guiding force.

The senior Fisher led the company through bank runs, the Depression and two world wars.

Paul Fisher joined the bank right out of college, and he was only 26 when his father died of a heart attack just three weeks after a party celebrating his 50 years in banking. The bank’s board of directors then named the young Fisher vice president, secretary and treasurer.

By age 34 in 1972, Fisher became bank president. By then, F&M had expanded to branches in Faith and Rockwell, had 27 employees and deposits of around $10 million.

Today, F&M Bank has 10 locations in Rowan and Cabarrus counties, more than 130 employees and some $500 million in assets.

In an excerpt from F&M’s 100th anniversary book, “A Century Strong,” Fisher noted he wrestled with doubts after his father died, recognizing his lack of experience.

“Looking back,” the book said, “Paul Fisher says maybe he was too scared to worry the way he should have after his father’s death. The community knew him and, in hindsight, it probably was willing to cut him some slack. His father had built trust in customers throughout eastern Rowan County, while people in Faith thought the world of his stepmother, Dorothy Fisher.

“Lots of hardworking people also had watched the Fisher kids growing up and had seen Paul and Jake Fisher Jr. driving the farm tractor on the roads around Granite Quarry.

” ‘We were just part of the fabric,’ Paul Fisher said later. ‘It was easy to be accepted.’ ”

Because of its roots, F&M always has identified Granite Quarry as its home base. But in the early 2000s, Paul and Steve Fisher also had F&M put a huge investment into Salisbury when the bank bought half a city block on North Main Street that contained five vacant buildings and several parking lots.

In the end, F&M restored the old R.W. Norman and Montgomery Ward buildings, creating a new F&M Financial Center in the process. The redevelopment also led to a rebirth of Easy Street, the creation of the F&M Trolley Barn for events and the paving of the way for a new Waterworks Visual Arts Center.

Fisher had plenty of more stories to tell after those projects.

In his many community fund-raising efforts, Fisher met with people and found ways to give them ownership in a common goal. He also used emails. phone calls, speeches, board meetings and personal notes to communicate.

Many times, Fisher liked to hand out copies of  Dale Carnegie’s “How to Win Friends and Influence People,” a book he said changed him professionally. When Fisher served a year as president of the N.C. Bankers Association in 1986-87, he made it a point to visit each of the  80-plus member banks.

He also went all out in trying to give members an annual convention weekend they would not forget.

On the convention’s Friday night, he brought in Atlanta syndicated columnist and humorist Lewis Grizzard, and on Saturday night, his guest speakers were then N.C. Gov. Jim Martin and U.S. Transportation Secretary Elizabeth Dole.

His “secret weapon” that night, he said, was Jackie Torrence, a legendary storyteller from Granite Quarry.

Former Salisbury Post editor Steve Bouser wrote in a 1991 column, “This is a man who could squeeze blood out of a turnip. It’s not just that he’s a super salesman or a heck of a guy. He’s both. Mostly, it’s that he believes so deeply and emotionally in what he’s doing.” 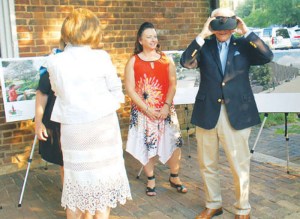 It’s difficult to list all of Fisher’s contributions and accomplishments. He was the first president of the Granite Quarry Jaycees. He chaired or served as president for the Rowan County Chamber of Commerce, Salisbury-Rowan YMCA and Salvation Army.

He belonged or served as a board member over the years on the Granite Quarry Civitan Club, Salisbury Rotary Club, Rowan County United Way, United Negro College Fund, Salisbury Sales and Marketing Club, Industrial Management Club, Granite Civic Park, Catawba College Board of Trustees and Livingstone College’s Board of Associates.

In addition, he had been a director for the Alltel Telephone Co., Granite Knitwear, Carolina Maid Products and Rowan Memorial Hospital.

Beyond college, he finished numerous courses with the American Institute of Banking and served a two-year term as dean of the N.C. School of Banking, when it was sponsored by the N.C. Bankers Association.

Closer to home, he taught Sunday School and was on the church council at Wittenberg Lutheran in Granite Quarry. He served on the selection committee for the Morehead Scholarship to UNC, and schools often asked him to address their students.

In May 1992, speaking to 220 honor graduates of Rowan-Salisbury Schools, Fisher told them, “The world at first glance seems perfect. Therein lies the trap your generation must avoid — apathy — being satisfied with the way things are or seem to be.

“Being satisfied is dangerous.”

Fisher also spoke to Rowan-Cabarrus Community College graduates in 1996 and used a race car analogy that offered three keys to winning the race of life:

• A superior pit crew of family, friends and co-workers.

Fisher had a couple of other health scares over the years. He underwent triple bypass surgery in 1989. In 2001, he had an 11-day stay at Rowan Regional Medical Center, followed by two weeks of intravenous fluids at home after being bitten by a brown recluse spider.

He confronted another kind of cancer in 2002 —  non-Hodgkins large cell lymphoma, which doctors caught in the early stages and successfully treated. He went through several months of chemotherapy back then.

Paul Fisher and his wife of 60 years, Sue, had two children and 10 grandchildren.