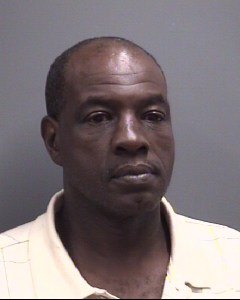 SALISBURY — A 911 call about an armed man led Salisbury Police to charge a local man with weapon-related and drug offenses.

Police searched an area behind Christo’s Family restaurant and found the man sitting behind a dumpster drinking a beer in a brown paper bag, said police spokesman Lt. Lee Walker.

The man got up and began walking from the area. An officer attempted to catch up to him, and he took off running, Walker said. Police began a short foot chase with the man, who tossed a gun aside. Police then drew their guns and ordered the man to stop. He kept running and fell into a bush.

He was arrested in the 100 block of South Long Street. Police found the 38-caliber revolver that the man ditched, Walker said.

Upon searching him in the jail, officers found one gram of marijuana in his left sock.

• Salisbury Laundromat, 418 E. Innes St., reported on Friday someone removed a power meter from the back of the business.

• A woman reported on Friday she was assaulted while in the 700 block of Wilson Road.

• A man reported on Saturday he was the victim of vandalism while in the 500 block of South Clay Street.

• Two women confronted a man after discovering he was seeing both of them. He then assaulted them on Saturday while in the 100 block of Confederate Avenue.

• A woman reported on Saturday she was the victim of an assault while in the 1700 block of First Street.

• A woman reported on Thursday she was the victim of a break-in in the 100 block of Sweetbriar Circle.

• A woman reported on Thursday she was the victim of an assault while in the 100 block of Bruner Sloop Road, China Grove.

• Tydarius Jquon Robinson, 23, was charged on Thursday with felony possession with intent to manufacture, sell or deliver a controlled substance schedule II while in the 6600 block of northbound Interstate 85.

• Jose Martinez-Rebollar, 31, was charged on Thursday with misdemeanor assault on a female while in the 100 block of Bruner Sloop Road, China Grove.

SALISBURY — Salisbury police investigators have identified a man and woman killed inside their Lincolnton Road home this weekend as... read more