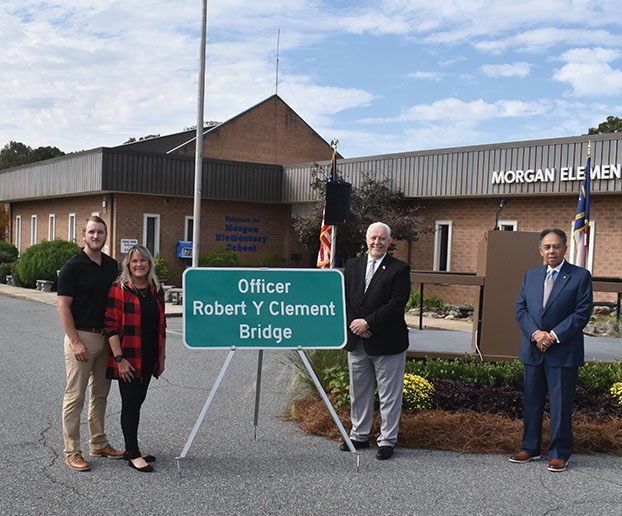 SALISBURY — Lunda Eller has one request for people when they drive over the overpass formerly known as bridge No. 141 that spans South Second Creek on Stokes Ferry Road.

“As you cross over the Robert Y. Clement bridge, whisper his name. He can hear you,” said Eller, Clement’s former wife. “Because of this honorable dedication, the sacrifice Robert made for his community and us will never be forgotten.”

Robert Y. Clement was an officer for the East Spencer and Spencer Police Departments. While serving a warrant for arrest in 1997, Clement was shot and paralyzed. He passed away on June 3, 1999, when his son Robert “Bobby” Clement II was only 10 months old.

To honor Clement, the North Carolina Department of Transportation named bridge No. 141 the Robert Y. Clement Bridge during a ceremony on Friday afternoon at Morgan Elementary School. 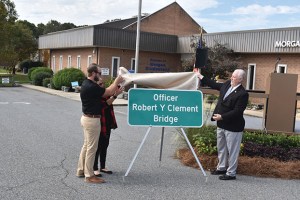 Lunda Eller, Robert Clement II and Sen. Carl Ford unveil a copy of the sign that now stands by the bridge, named in honor of the fallen officer. Ben Stansell/Salisbury Post

The ceremony was held just a short distance from the bridge that Clement drove over almost everyday on his way to work.

“He was the kind of person we should all strive to be and someone I hope I can be half as good as someday,” Robert said. “Losing him was the most tragic thing that has ever happened to my family. But knowing that this bridge, the same bridge he drove across to work everyday and the same one I drive across everyday, is named in his memory is truly heart touching more than words can express.”

Sen. Carl Ford, R-33, has been involved in the process of naming the bridge in honor of Clement for several years. Ford said that the process was “frustrating” because it took so long and involved so many separate steps.

“This is many, many, many years in the making,” Ford said.

In addition to working with the town of Spencer and NCDOT to name the bridge, Ford said that he collaborated with Gov. Roy Cooper’s office. Ford said they even had to change some of NCDOT’s rules to get the bridge dedicated to Clement.

Renaming the bridge was one of Ford’s top priorities in 2020.

“This past year, I took a big Sharpie and wrote myself a big note and put it on my desk that I would get this bridge named if it was the last thing I do,” Ford said. “I had it there everyday. I never moved it. I never touched it. It’s still there. Now I’ll be putting it away.” 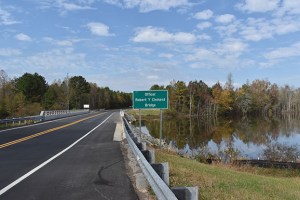 The bridge’s dedication to Clement was supported along the way by the Rowan County Board of Commissioners, who approved a motion to name the bridge in June 2019. Chairman Greg Edds and Commissioner Craig Pierce were present during the ceremony and Commissioner Mike Caskey, a police officer in Charlotte, spoke in honor of Clement.

“His life and his sacrifice was a bright beacon of hope in a cold world of darkness,” Caskey said. “He was a man who knew the dangers of his profession. He knew the risks he would have to take. He knew that one day, he may be asked to pay the ultimate price to serve his fellow man. Yet he did serve with passion and distinction. We do not have to wonder if he made a difference in this world. His legacy is obvious.” 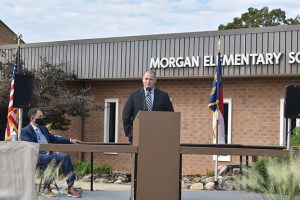 Andrew Perkins, a member of the N.C. Board of Transportation, emceed the ceremony and delivered remarks on behalf of the board.

“It is always a privilege to be able to name roads, bridges and ferries in the honor of those who have made an impact to North Carolina and made the ultimate sacrifice,” Perkins said. “These are often government leaders, policemen, first responders and community heroes. Officer Robert Clement certainly falls into that category.”

Eller is a master deputy for the Rowan County Sheriff’s Office and Robert, who was deployed Kuwait, has plans to attend Basic Law Enforcement Training to become a police officer, like his father. Eller said that Clement’s greatest pride in life was being Robert’s father.