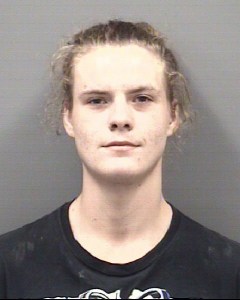 The incident began Saturday at a home in the 500 block of North Enochville Avenue. According to Sheriff’s Office reports, Barnes was there to deliver a message from the victim’s ex-boyfriend, who was in jail.

A confrontation ensued and the victim struck Barnes’ Toyota with an unknown object as he was getting ready to leave the driveway. Barnes stopped the car, got out and fired a gun in her direction, said Maj. John Sifford.

The woman was not hit but started running. Investigators were able to confirm the confrontation via surveillance video at a business across the street from the home.

Barnes sped off and a deputy spotted him a short time later speeding down Cannon Farm Road. This led to a short vehicle pursuit. Sifford said at one point Barnes pulled to the side of the road as if to let a passenger exit. The driver eventually sped off again and stopped in a gravel driveway.

The passenger, later identified as a 17-year-old juvenile ran from the car. A K-9 was called to the scene to search for the teen. After 30 minutes, he was located. He was issued a juvenile petition and released to the custody of his mother.

Deputies searched the car and allegedly found a pill bottle that contained 5 grams of methamphetamine in the center console. Deputies also found multiple bags underneath the pill bottle. The bottle had methadone residue on it.

One gram of marijuana allegedly was found in the glove box as well as a 9mm gun magazine found in the car. There was no gun found, Sifford said.

A back seat passenger told deputies he was just in the car to receive a ride to a friend’s house and that all the items seized belonged to Barnes, Sifford said. The passenger was released and faces no charges.

Although the shooting incident occurred on Saturday, the victim did not report the incident until Oct. 13. Barnes was charged with the assault after it was reported.

Barnes remains in the Rowan County jail under a $35,500 secured bond.