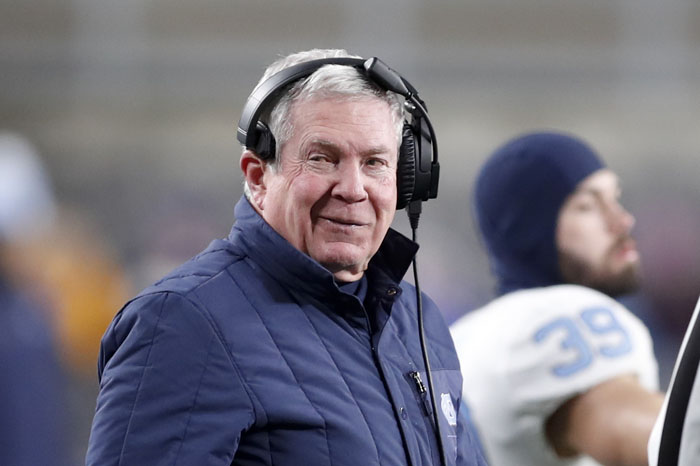 It took Mack Brown less than two years to lead a struggling North Carolina program to its highest ranking in more than two decades.

Now the fifth-ranked Tar Heels will try to maintain that perch alongside tradition-rich programs atop the AP Top 25 poll. And he knows that won’t be easy for a program that hasn’t shown much staying power since last cracking the top 5 during Brown’s first stint in Chapel Hill.

“That’s who you want to be,” Brown said. “Right now, when people put up the top 5, and they see the other four, they say, ‘Yeah, I got it.’ And they see North Carolina and they say, ‘What are they doing in there? Where’d that come from? Come on, man. They’re not that good.’

“We want it to be where when they put us in there, we’ve earned that right. And if we don’t play well, we’ll be out fast.”

To Brown’s point, it’s perennial heavyweights Clemson, Alabama, Georgia and Notre Dame atop this week’s poll — though the Big Ten and Pac-12 have yet to play this year. And then there are the Tar Heels (3-0, 3-0 Atlantic Coast Conference), who climbed three spots and jumped over No. 6 Ohio State to enter Saturday’s trip to Florida State with their highest ranking since last cracking the top 5 in 1997 shortly before Brown left for Texas.

Before this season, the Tar Heels had cracked the top 10 once since Brown’s departure: for two weeks late in 2015. Otherwise, they had more seasons in which they never were ranked (14) than ones in which they were (eight).

“It’s definitely cool to see that North Carolina is ranked No. 5 in the country and just seeing how far this program has come in just a couple years,” quarterback Sam Howell said. “But yeah, we definitely are aware that a lot people probably don’t think we should be that high in the rankings.”

The Tar Heels had lost 21 of 27 when  Brown took over  after the 2018 season, but have won six straight. They have climbed from No. 18 in the preseason primarily on the strength of the Howell-led offense featuring big-play threats on the ground and downfield. That unit erupted for 56 points and 656 yards in last weekend’s shootout win against then-No. 19 Virginia Tech.

Even the always-optimistic Brown said the Tar Heels are “ahead of where I thought we would be.”

“I’ve got a ton of respect for the man, the coach,” first-year FSU coach Mike Norvell said. “You see what he’s done in kind of reviving the North Carolina football program here in such a short period of time.”

Brown, who won a national championship during his 16-year run at Texas, is also realistic about this team’s concerns. He has said repeatedly that the Tar Heels must build more depth, saying coaches must “force ourselves” to get inexperienced players in earlier after losing valuable reps when the coronavirus pandemic led to the cancellation of spring practices and a nonconference game against Charlotte.

That’s particularly true on defense after the Hokies had 45 points, 495 yards and three touchdowns of at least 26 yards. There have also been too many penalties (29) and too few takeaways (one).

“I don’t think looking ahead will get us anywhere, and thinking we’re better than we are won’t do anything either,” linebacker Chazz Surratt said.

Coincidentally, UNC’s last game as a top-5 team also came against FSU. Brown remembers seeing a packed Kenan Stadium crowd for a primetime-TV game in November and thinking the program had “finally arrived” — only to see Bobby Bowden’s third-ranked Seminoles dominate in a 20-3 win as the Tar Heels sputtered to 73 total yards in their only loss that year.

Brown departed for Texas less than a month later and UNC never got back to that point again.

The goal this time is to stick around. “We’re a team that has to play well every Saturday before we can have a chance to win,” he said. “And that’s what we’ve told the guys.”