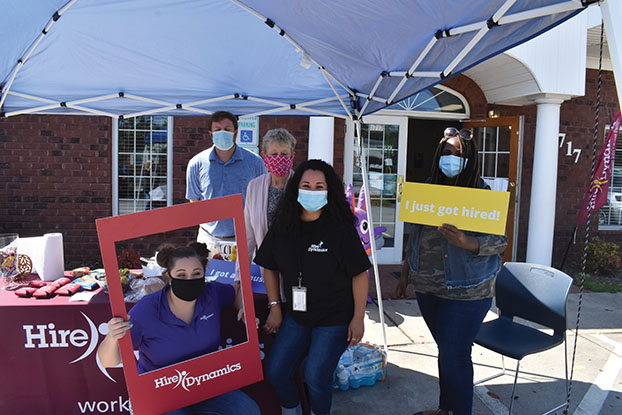 SALISBURY — Hot dogs were cooked, candy was given out and dozens of people were assigned to jobs during the Hire Dynamics “HirePalooza” event on Wednesday.

The goal of “HirePalooza” was to help remedy that problem by hiring 100 new workers. While Hire Dynamics might not have hit that mark, the staffing agency was able to immediately place several dozen people into jobs.

“I would say out of the 35 or 40 people that came in today, we put at least 30 to work or have them lined up to start a job this week or next week,” said Matthew Barrier, business development manager for Hire Dynamics. “The ones that we didn’t put today will probably go to work next week.”

Barrier said that Hire Dynamics currently has more than 100 job openings, many of which are in the manufacturing sector.

“I just don’t think that people know that there are a lot of jobs out there,” Barrier said. “There are plenty of open jobs, it’s just about raising awareness that they exist.”

Hire Dynamics is working to fill job orders for numerous clients, including Continental Structural Plastics. CSP recently announced plans to expand its Salisbury facility and is looking to hire 100 new workers. Barrier said that manufacturers have begun to ramp up production again after slowing or stopping operations for several months due to COVID-19.

Barrier said that most of the jobs Hire Dynamics is looking to fill offer wages between $12-15 an hour. Many of the jobs are temporary, but could end up being permanent, Barrier said.

Hire Dynamics’ efforts to connect people with open jobs could help lower an unemployment rate that has already been decreasing in Rowan County in recent months. After spiking in the summer, Rowan County’s unemployment rate fell from 9.3% in July to 7.1% in August, according to the North Carolina Department of Commerce.

“Activity has picked up both in terms of existing companies looking to expand their operations and companies from outside the area looking to locate here,” Rowan County Economic Development President Rod Crider said in a news release. “While COVID-19 had caused a lull in activity, we are optimistic that we are seeing a return to pre-pandemic levels of activity.”

Even more jobs could be on the way. Crider said in a news release that the EDC is currently working with at least five Rowan County employers that are making plans to enlarge their capacity and employment.