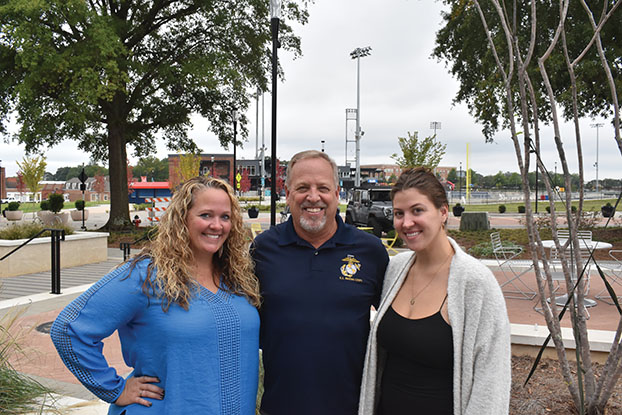 ‘Bring in the bass and treble’: How small development team is transforming downtown Kannapolis

KANNAPOLIS — It’s easy for Ken Lingafelt to feel like a conductor sometimes.

He’s currently in the midst of one of the most extensive orchestrations of his life. Lingafelt, along with his small team at Kannapolis Retail Ventures, is leading the development of a major portion of Kannapolis’ formerly dormant downtown.

The development was catalyzed by the city’s decision to invest in the construction of the $52 million Atrium Health Ballpark that now serves as an anchor for the downtown. The ballpark did exactly what the city wanted — it attracted developers. That included Kent Gregory and Peter Flotz from Lansing Melbourne Group, a development firm based in Fort Lauderdale, Florida.

Gregory and Flotz entered into a public-private partnership with Kannapolis in an effort to revitalize the area around Atrium Health Ballpark. Along with developing VIDA — a multi-use building that will house nearly 300 apartments, a parking deck and several shops — the pair bought three blocks of property on West Avenue, right across from the ballpark.

Since Gregory and Flotz aren’t native to North Carolina, they needed someone with a knowledge of the local area who could lead the effort to fill those empty building.

Cue Lingafelt, a longtime developer from North Carolina who has worked to develop projects in and around Kannapolis for decades.

At the time that Lingafelt got involved in the project, downtown Kannapolis was basically empty.

“The Pizza Hut was here, the doctor’s office, the Lee’s store. Everything else had closed down for not having a reason to be here,” Lingafelt said.

His job, as Gregory and Flotz’s property manager and leasing agent, was to change that. 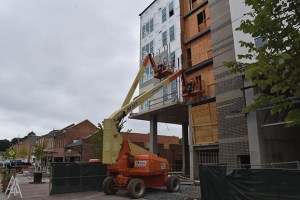 Construction workes continue to work on the facade of VIDA, a multi-use building that will house nearly 300 apartments and 1,400 square feet of retail space. Ben Stansell/Salisbury Post

There were several factors that drew Gregory and Flotz to Kannapolis, including the city’s proximity to Charlotte and what would become Atrium Health Ballpark.

“We felt the closeness to Charlotte and the growth of Charlotte was very much of interest,” Gregory said. “When the city committed to investing $52 million in the baseball stadium and approximately $15 million in infrastructure around West Avenue and the fact that the North Carolina Research Center was already there and had about 700-800 people in those buildings, we felt like, ‘Hey, there’s an opportunity here to revitalize this downtown.’”

Another factor in their decision to invest in Kannapolis was the fact that the area was designated as an opportunity zone, which allows investors to reduce tax bills by investing in projects that are in low-income or adjacent to low-income areas. The opportunity zones were created by the Tax Cuts and Jobs Act of 2017. To benefit from major tax incentives, private entities must remain invested in an opportunity zone for 10 years.

“You’ve got to buy it, remodel it, occupy it for 10 years,” Lingafelt said. “You can’t sell it, you can’t do anything. You’ve got to make it happen. You can’t do that unless you believe in what you’re doing.”

Lingafelt believed in what Flotz and Gregory were doing. Now a resident of Florida, Lingafelt decided that the project was promising enough to split his time between his new home and his old stomping grounds. Now, he travels to Kannapolis every other week and works with Victoria Dunning and his daughter MaKenzie Lingafelt, the other two partners in Kannapolis Retail Ventures, to revitalize the downtown.

Since long-term success is the goal, Lingafelt and his team have taken a measured, yet aggressive, approach to finding tenants for the open spaces along West Avenue.

For Lingafelt, that meant finding the right type of businesses and putting them in position for maximum success. He said the crew decided early on it would only rent spaces to local businesses that fit their vision.

“When they call us up and say they want to put something downtown and it doesn’t fit, we have to say ‘no,'” Lingafelt said. “It has to improve the neighbor next to you or add something. Where they might have a great business, we have to say, ‘At this point, we don’t have a spot for you because it has to fit our mold.’”

The first tenant was Old Armor brewery, a veteran-oriented business owned and operated by Lingafelt’s son, Kyle. The brewery, Gregory said, was the ideal business to start with since it brought a community feel to the area. After that, interest grew and other businesses began committing to the empty storefronts along West Avenue.

“Looking at other small towns, you have to have the barber shop, the beauty shop,” Lingafelt said. “You’ve got to have those amenities. Now you’ve got to have your food, your fitness center, your dance studios, your retail to create that buzz downtown.”

In just a matter of months and despite COVID-19 hampering the economy, Kannapolis Retail Ventures has leased every available space to an extensive list of businesses.

Among the new tenants are Lovely Lines boutique, the Cabarrus Cycling Company and My Sister’s Place — an ice cream shop. Sabor Latin Street Grill recently hung a sign outside of its new location near Old Armor. A steak restaurant called Chophouse 101 will be opening in the near future.

Although there are several boutiques moving into downtown Kannapolis, Dunning said that they’ve tried to avoid having two businesses of the same kind.

“We don’t want people to take business from other people,” Dunning said. “We want people to be successful. If you had two of everything, it wouldn’t work. That’s why we’re very picky about it.”

Lingafelt has employed a hands-on approach to property management. As soon as a client contacts Kannapolis Retail Ventures to express interest in a space downtown, Lingafelt said he asks what they want their space to look like. Then, they set out to implement those ideas, no matter what may be within reason.

“Ken is an exceptional guy because not only is he good with the details of getting things built out, but he’s very good with the public relations side of it and working with the tenants,” Gregory said. “People kind of gravitate toward him and he’s formed a management team and it’s really strong and fun to work with.”

While Lingafelt doesn’t take credit for many of the ideas currently playing out, he does feel like a conductor at times — the person tasked with making sure everything works in harmony.

“We bring in the bass and treble and help everybody to come in. It’s a group deal,” he said.

Kannapolis Retail Ventures has signed over 20 tenants to leases downtown so far. Most of those businesses, Gregory said, will open by the end of the year.

“If you look at the situation across the United States and what’s happened in the past six or nine months because of COVID, there’s not much going on in retail,” Gregory said. “In that same time frame, we’ve leased up the whole downtown. It’s been an amazing happening of events that we’ve been able to do that.”

Not all of the businesses coming to downtown Kannapolis have been announced yet.

Ensuring that tenants are happy with their location is only part of the job for Kannapolis Retail Ventures. They also have to market the businesses they’ve brought to downtown. 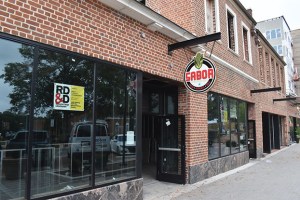 When Lingafelt and his team secure a commitment from a business, it’s typically followed with an announcement on the Kannapolis Retail Ventures’ Facebook page.

Primarily run by Dunning and MaKenzie Lingafelt, the page has already amassed over 1,000 followers since coming online in July. Those followers are the first to see what new businesses are coming to downtown. Blasting news out over social media has helped create a palpable buzz around the revitalization effort, Dunning said.

“Overall, I think social media has played a huge role and it gets everybody even more excited to find out what’s coming next,” Victoria said. “Everybody wants to know.”

Dunning and MaKenzie also utilize social media to hint at what could be coming next, posting pictures of empty storefronts with cryptic captions to generate excitement.

“The girls did a good job of it, sort of teasing the market,” Lingafelt said. “Here’s an old building, there might be someone out front. Now, there might not be anything done yet in that building, but it’s getting a thousand hits a day of people excited about that person coming here.”

Even though Lingafelt’s team has leased every currently available space it manages, the company is working with Lansing Melbourne Group on other projects downtown. 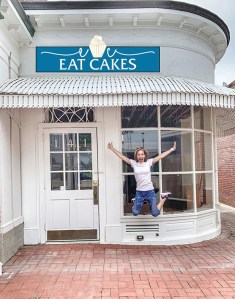 Donna Taylor, the owner of Eat Cakes Bakery, will soon be moving into a storefront at 141 W. Avenue in downtown Kannapolis. Her announcement was one of many that Kannapolis Retail Ventures has posted to its Facebook recently. Photo submitted.

The Gem Theatre isn’t the only historic venue in downtown Kannapolis undergoing renovations.

Lingafelt and his team are also transforming the old Swanee Theater into a music venue that he imagines filling with crowds on a nightly basis.

“Our goal is to have music entertainment year round,” Lingafelt said. “Baseball is seasonal, but the music that we’re going to add is year round and you’ll start three days a week and then go to seven days a week of some type of entertainment inside the (Swanee Theater).”

Lingafelt said that there are plans to build a five-story Marriott Hotel overlooking the right outfield of Atrium Health Ballpark. The Marriott will be attached to a building that will house ticketing offices, a retail shop and more apartments, the balconies of which will be prime seating for Cannon Baller games. The downturn in the hospitality industry may delay the Marriott Hotel, but interest is already growing around the rest of the project.

“We’ve already had about six people interested in those,” Lingafelt said. “It’s a little higher end, but you would have your own balcony overlooking the ball games, concerts, anything.”

Kannapolis City Manager Mike Legg, who has known Lingafelt for about 20 years, said that the development of the downtown, despite a pause on Minor League Baseball, is going exactly as he envisioned when the city bought back the downtown several years ago and decided to invest millions.

“This was the vision,” Legg said. “What’s happening now is exactly the vision that our city council had.”

The only difference, Legg said, was that it wasn’t expected to come together this soon.

“I personally didn’t think this would happen so quickly, but that’s a testament to the hard work that they’ve put into it,” Legg said.

SALISBURY — The October issue of Salisbury the Magazine, a publication of the Salisbury Post, has reached subscribers and is... read more