All this for Merritt: Grace Lutheran fundraiser on tap with differences 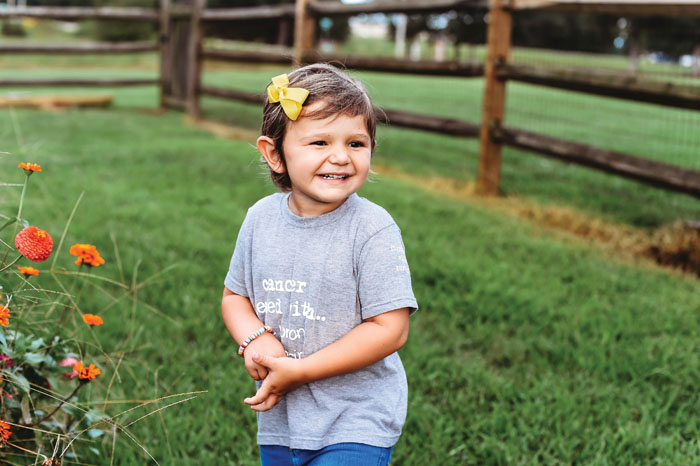 Merritt Plummer loves the outdoors and flowers. She is enjoying her wildflowers she planted in the family’s backyard. Photo by Summer Herlocker

At three years old, Merritt Plummer doesn’t meet a stranger and she seems comfortable in nearly every situation. And she’s happy almost all the time, according to her parents, Aaron and Kayla Plummer. And on Saturday, Oct. 10, a lot of caring folks at Grace Lutheran Church are going to try to ease the family’s financial burden.

When Merritt was almost 18 months old on Feb. 27, 2019, her babysitter noticed something wrong. Calls to her parents soon had the family on the way to Suburban Pediatrics, first in Davidson and then to Kannapolis where urologist Dr. Luis Perez diagnosed her with a prolapsed vagina. By 3 p.m., since the clinic was not on the Plummer’s insurance, the family was referred immediately to Levine Children’s Hospital by Dr. Perez who waived any fee for his services that day. Dr. Perez later visited Merritt at Levine’s.

Merritt’s pain had subsided by the time she arrived at Levine’s. Her vagina was no longer prolapsed. An overnight stay gave time for a biopsy, bone scans and a CT. Oncologist Dr. Javier Oesterheld detailed a treatment plan that included extensive chemotherapy and funneled radiation to the affected spot. Merritt was entered into a research study since her condition was so rare. 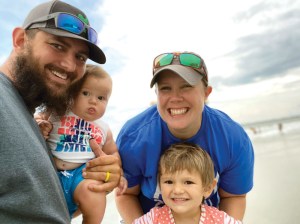 Merritt was diagnosed with rhabdomyosarcoma, with a 5-centimeter soft tissue tumor attached to her vaginal wall, on March 4, 2019. Another Levine’s hospital in New York was considered for treatment since they were the only ones in the nation to have done the expected treatment. A hysterectomy and vaginectomy were possibilities all for a dime-sized cancer of her vagina wall.

Kayla said, “We met Dr. Carolina Fasola, the radiation doctor, and Merritt was comfortable with her right away. Merritt played with her and seemed happy, so we chose to stay in Charlotte for the complete treatment.”

Aaron said, “Dr. O told us that it was going to be a long road. There were a lot of sleepless nights and a lot of tears. Only one parent could be with Merritt in the hospital at a time. But Dr. O assured us that our daughter was going to be fine.” Kayla stayed with Merritt while Aaron tried to work and stay in touch by Facetime.

Regulars at the hospital for a year and a half, Merritt experienced a lot of new things. In the beginning, she didn’t like to get her height and weight measured and she hated anything to do with her chemo port. But as the visits wore on, Merritt began to take it all in stride. Kayla said, “Eventually she didn’t want help with her port and she made sure that all her dolls had a port too!”

Aaron and Kayla had only compliments for the nurses and other staff. Kayla said, “By the second visit, everybody there knew Merritt’s name. The nurses took time to learn what was special about each child. They knew that Merritt loved Band Aids and what her favorite snacks were. Those nurses truly love their job and they have stayed in touch with us. They even bought Merritt a battery-powered Jeep when her regular treatment was ending.”

One of the toughest things on the whole family was during the extensive chemo. Aaron said, “We had to change her diaper every hour because the medications were being flushed through her bladder. Desitin diaper cream and prescription Nystatin really helped but she did get chemical burn.” 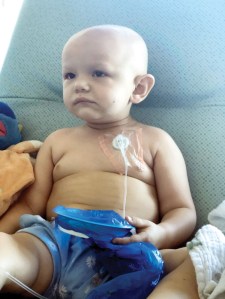 Merritt Plummer feeling sick and holding her own vomit bag while receiving a chemo treatment. Photo by Aaron Plummer.

Merritt has gone through 42 weeks of chemo as well as six months of maintenance chemo, for a total of 72 IV chemo treatments and 142 doses of oral chemo. Merritt had a total of three surgeries to remove the tumor throughout different stages of her treatment. She also received 10 brachytherapy radiation treatments, only the second time that this specific radiation has been done in the United States on a pediatric patient, the first in Charlotte. Merritt received all of her treatments at Levine Children’s Hospital in Charlotte.

Appreciative of all the staff at Levine’s, Kayla said, “They were the family we wish we never had, but the best family we could ever have.” She and Aaron wanted to especially thank the Levine urologists, Doctors Alison Keenan and Mark Williams.

On Aug. 17, 2020, Merritt had her port removed and was able to ring the bell signifying her end of treatment and that she is now cancer free. She turned 3 on Sept. 8. Periodic scans will check for signs of cancer over the next several years.

To help the Plummer family with medical expenses, Grace Lutheran Church will continue one of the most successful fundraisers in the area on Oct. 10. But there are changes from prior years with the format slimmed down and simplified for coronavirus safety measures.

The popular fundraiser changes from a massive fish fry to a port-a-pit chicken drive-thru. Traffic will pass in front of the Family Life Center from 3-6 p.m. for food pickup and donation drop off. Oak Grove Methodist Church will provide the cookers and coolers for the first come, first serve event. Fundraiser leader Mike Yost said, “We want to make the cause successful even though the coronavirus has limited what we can do. We’re fighting to help Merritt’s family. If you don’t come for food, please come by to make a donation.” Merritt and her family, including her 6-month-old brother, Eli, will be on hand.