An officer could see smoke circulating inside a Honda Accord after pulling the car over on South West Street at West Thomas Street. The officer approached the driver, Kenneth Martin Lawrence, 19, and smoke billowed out of the car, said Lt. Lee Walker. 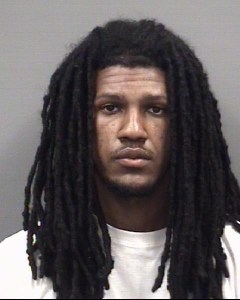 The officer got the driver and two passengers out of the vehicle so he could search the car. The officer reported he could see a plastic bag with nine grams of marijuana in the center console and a red backpack allegedly was found with 29 grams of marijuana inside. A handgun with an extended magazine was found in the back floorboard. The gun was reported stolen on Aug. 7 by a Stanly County Sheriff’s deputy.

While one officer began removing his handcuffs, one person, identified as Roper, allegedly took off. Officers secured the other passenger and driver. Roper jumped a fence at Livingstone College and was found inside the college’s gym. Walker said Roper and the driver are both Livingstone College students.

Lawrence was issued a citation for misdemeanor aggravated possession of marijuana. The other passenger, who was also listed in a report as a Livingstone student, was released.

Roper remains in the Rowan County jail under a $10,000 secured bond.

UPDATE: All felony charges against Roper were later dismissed.

• Holden Building Company reported on Wednesday power equipment was damaged after someone tried to steal it from the 300 block of Cedar Springs Road.

• A man reported on Tuesday tools were stolen from a company vehicle while parked in the 100 block of Cruse Circle.

• Nazareth Children’s Home reported on Tuesday the property was vandalized in the 1100 block of Children’s Circle, Rockwell.

• A man reported on Tuesday he was the victim of larceny while in the 400 block of Coley Road.