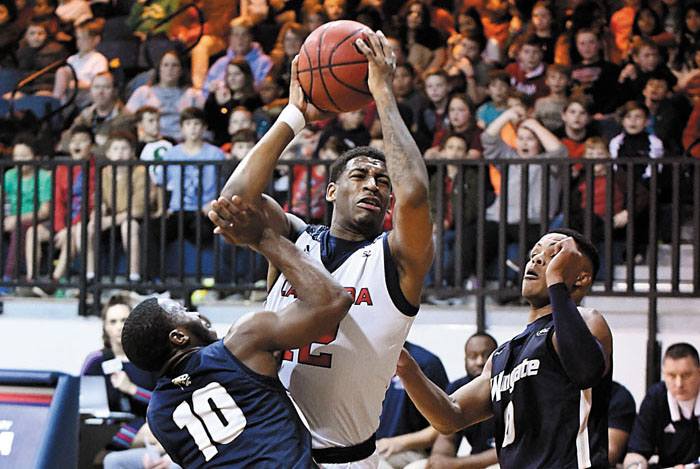 SALISBURY — It’s hard to speak with precise diction with a mask on and it’s really hard to understand what people are saying.

Basic interviews in the new world brought on by COVID-19  have become a challenge, but Catawba head men’s basketball coach Rob Perron is smiling behind his mask.

He’s pleased because target dates are in place for South Atlantic Conference hoops.

The Indians are working out now in Goodman Gym. Their basic timetable is eight hours of workouts per week.

Half of that time is devoted to basic strength and conditioning stuff, but at least it’s stuff.

This is where team chemistry and team bonding start.

“It’s non-contact work and we’re coaching with masks, but at least we know where we’re going now,” Perron said. “It’s good to have official dates. In general, we’re happy.”

There are a lot of fresh faces on Catawba’s 17-man roster. This is essentially a brand new squad. The four guys who averaged double figures last season — Marcell Haskett, Daquan Lilly, Malik Constantine and Devin Cooper — have moved on.

The returners are led by high-flying Larry McLeod and Terrence Whitfield, who was coming on strong late last season. Dependable DJ Johnson has been in the rotation a long time and lends experience.

“It’s very different right now because we’ve been out so long,” Perron said. “We’ve got guys who are at a whole lot of different levels.”

The veterans have a major advantage over the newcomers, at least for now, but the Indians will be counting on a large and imposing group of rookies. It’s a mix of talented freshmen, transfers and junior college athletes. That’s been the formula for Catawba of late. A couple of years ago, Catawba decided to stop trying to compete with elite SAC programs such as Lincoln Memorial and Queens with kids. Now the Indians compete against men with men.

“We’ve got a strong and very tall recruiting class,” Perron said. “The bar has been raised by how well we’ve played the last two seasons. We’ve built some good tradition with a lot of positives. Guys are excited about following in the footsteps of really good players. Now the task is to build another good team.”

Catawba was 25-8 in 2018-19 and was 20-10 last season. Catawba was headed to the Southeast Regional when COVID-19 brought the season to a screeching halt.

Obviously, it’s going to be critical to hit the ground running this year. There won’t be any feeling-out process. There won’t be a string of non-conference games to figure out the lineups that work best.

Perron hasn’t ruled out Catawba adding one or two non-conference games (the SAC is allowing up to two), but for now Catawba’s 20-game schedule is all SAC games.

The SAC has expanded to 13 teams with the addition of Limestone. Catawba will play eight teams home-and-home — Anderson, Mars Hill, Wingate, Lenoir-Rhyne, UVa-Wise, Lincoln Memorial, Carson-Newman and Newberry. Catawba will play the other four — Coker, Queens, Tusculum and Limestone — once each. The league made out the schedule.

“We’ll be playing a lot of games in our own bubble,” Perron said. “First semester is ending earlier than usual and second semester is starting later than usual. So there’s going to be a significant period of time when the only ones on campus are going to be our men’s and women’s basketball teams.”

There are still a lot of question marks about the 2020-21 season.

“Will the tournament pool be larger than usual — or will it be smaller?” Perron wondered. “We’ll have to see. We don’t know yet.”

Whether or not fans will be allowed at Catawba’s games is also something that is TBD.

The fact that Perron is wearing a mask in his office is a sign of just how much uncertainty there still is.

“It was hurry up and wait for a while, and we didn’t know what was going to happen,” Perron said. “But now we’ve got a date. Now it’s all very real to our guys, and that’s important.”