College basketball: Downs hopes to be a factor for Catawba 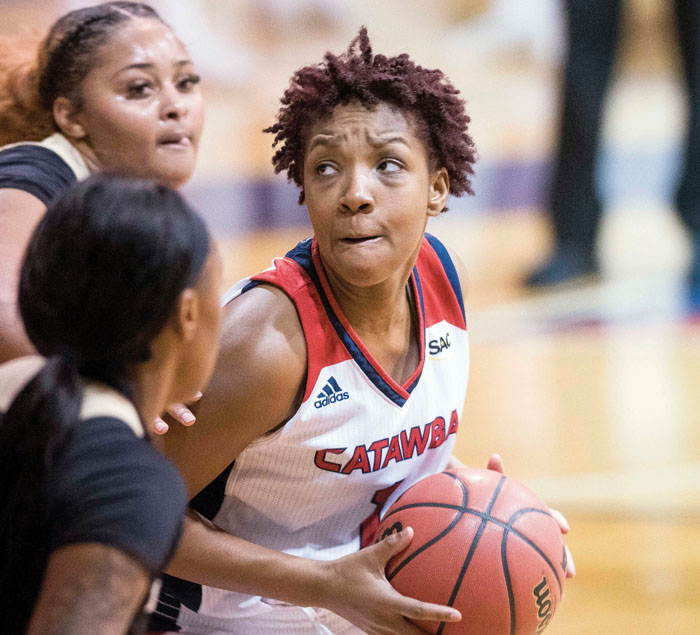 Now the South Rowan graduate is eager to prove to herself and to doubters what she can do on basketball and volleyball courts.

She plans to compete in both sports for the Indians in this unique 2020-21 school year. She’ll be attempting a volleyball comeback after not competing in that sport as a college freshman.

Catawba’s basketball and volleyball seasons will be condensed.

Catawba women’s basketball expects to launch a 20-game regular season (all South Atlantic Conference games) on Nov. 21, and the loaded Indians will have SAC tournament and perhaps NCAA playoff games to participate in after that.

Downs expects Catawba volleyball, which normally is played in the fall, to take on a 14-game schedule at some point in 2021.

“I’ve always enjoyed volleyball a lot and the coaches and players have been texting me and talking to me about playing,” Downs said. “I’m healthy now, so I really want to try it.”

Catawba basketball is conducting conditioning-oriented workouts for eight hours per week. The SAC’s plan is for standard team practices to commence on Oct. 22.

Downs is also putting effort and time into volleyball workouts, about four hours a week.

The 5-foot-11 Downs was co-captain and co-MVP for South Rowan volleyball as a junior and senior and was All-Rowan County.

She’s fast enough and springy enough that she was a county track champion in the long jump, high jump and 4×100 as a senior. She was second in the 200 to Carson’s Mikaila Gadson, a D-I track and field athlete.

But it was in hoops where Downs became a household name. As an All-State senior, she averaged a county-record 32.3 points per game. She scored 60 percent of South’s points. She also averaged 12.5 rebounds, 4.2 steals and 1.6 blocks and led the Raiders in assists.

Downs attracted a lot of defensive double teams as a senior, but she had scoring games of 40, 42, 52, 53, 43 and 42 points in the regular season. There was a mind-boggling 52/17/10 triple double against a good North Davidson team. In South’s first-round playoff loss to R-S Central, Downs scored 44. She totaled an insane 839 points in 26 games.

But Downs was a feeble shadow of her once dominant self as a Catawba freshman, averaging 3.0 points and 1.6 rebounds, while playing about 8 minutes per game. She accumulated six fouls for every assist, shot 2-for-17 on 3-pointers and never looked comfortable. She took tough shots and passed up chances to drive. Things snowballed. If it could go wrong, it did.

McCutcheon does not expect Downs, who turned 19 in March, to experience a similar ordeal this November.

Her issues as a freshman were mostly physical. She got hurt in the summer of 2019 at the East-West All-Star Game in Greensboro.

“It was a muscle injury to a quad, and it slowed me down a lot,” Downs said.  “Then I tore it all the way. I had a hard time with it. It was terrible.”

Downs missed Catawba’s preseason conditioning, got behind, stressed out, and then tried to come back too soon.

She wanted to play and coaches wanted her to play, seeing her as the last piece that might put a strong team over the top, but it didn’t work out. She showed flashes, but not nearly often enough. Eventually her confidence waned. The shots went in and out and every whistle that blew seemed to be a foul on her.

Surgery was an option for Downs following that tough season, but she chose a more conservative program of rest and rehab.

“Surgery would have meant being out of basketball a long time, and I really wanted to play this season,” Downs said. “It’s worked out. It was about two months ago that I finally started to feel like myself again, like I was all the way back. I just needed time to recover and I never had that time last season. I can do the things I want to do.”

Downs was surprised by how much more physical college ball was than high school and realized she needed to get stronger. She dedicated herself to the weight room, to the outdoor track and to rehab workouts during the offseason, so she’s ahead of most players right now.

“You can tell who’s been running and working out in the offseason and who hasn’t,” McCutcheon said. “Janiya has been one of our sharper-looking players in conditioning drills. She looks stronger and in a lot better shape.”

On paper, Catawba will have a terrific team. The roster lists 13 returning players, all of whom contributed, from a team that stood 16-1 (with the loss in overtime) in late January. At that point, Catawba looked like the SAC’s strongest team.

Things unraveled some late in the season with off-court adversity, but this was still a 23-6 team that lost only one home game. Senior Taisha DeShazo is a returning first team All-SAC player, while Lyrik Thorne was Honorable Mention All-SAC as a freshman and will no doubt be even better this season. There also were games where senior Shemya Stanback, probably the league’s quickest player, was even better than DeShazo and Thorne.

The team has added six depth-aiding freshmen, so it can play at a racehorse pace. McCutcheon believes some of the newcomers can help in November.

“With as many seniors as we have, there won’t have to be a lot of explaining and teaching,” McCutcheon said. “And we’ve got some dates now from the SAC. It’s good to have answers to a lot of our questions. Now we know where we’re going. Now we have some direction. The challenge is set for us.”

Toss a healthy Downs into the mix, and things could get really interesting for the Indians.

Players can opt out for this season if they wish due to COVID-19 concerns and still retain their scholarship, but Downs has signed the waiver and is ready to play.

It’s been a strange start to the school year for Downs. Most of her classes are online, but she attends labs physically on Wednesday and Thursday. She says it’s a lot easier to learn in person.

“It’s all very different as far as school,” Downs said. “Sometimes when I’m walking on campus, I don’t see anyone.”

The highlights of her week are the workouts where she gets to hang out with old teammates and meet new ones.

“It’s been great to see our players having a chance to laugh with each other again,” McCutcheon said. “No matter where they came from, they all speak the common language of basketball, and that’s a game they’ve enjoyed their whole lives. The effort is good. The energy is good.”

Downs said some of the Indians had resigned themselves months ago to not having a basketball season to prepare for, but now they’re working hard to get back in shape.

The Indians run, run and run some more during workouts. No contact, just sprinting. They plan to play fast.

That’s fine with Downs. That’s what she does best.

“I’m excited,” Downs said. “It’s good to have a firm date that we can all push for. I just hope we can make it all the way through the season.”