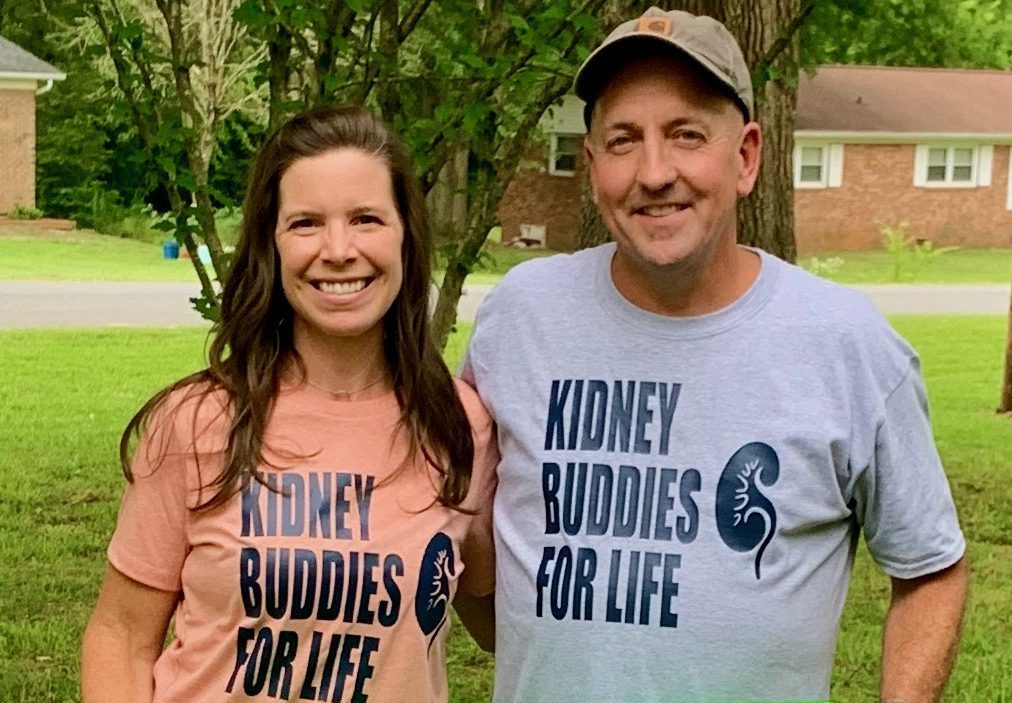 (Courtesy of Sheila Patterson Harrison) — Melanie Thomas Marshall (left) surprised Stoney Harrison, who lives in Rockwell, in June with news that she would donate one of her kidneys after his wife had advocated for a transplant for more than a year.

ROCKWELL — Almost a decade after being diagnosed with kidney disease, one local man will receive a transplant next month from a donor who said she was led by God to give the man one of her kidneys.

In August 2011, Stoney Harrison, now 57, was diagnosed with polycystic kidney disease, which is an inherited disorder where clusters of cysts develop in the kidneys. His condition progressed, affecting his kidneys’ function. Combined, both kidneys weighed around 30 pounds, said his wife, Sheila Patterson Harrison.

Sheila said doctors don’t consider kidney transplants until kidney function is less than 15%. About a year ago, Stoney’s kidney function started to drop below 10% while he was working full-time in a warehouse for 10-12 hours each day.

That’s when he was placed on the list for a transplant, and Sheila began advocating on social media, on college campuses and with flyers.

“He’s very private. He doesn’t like a lot of attention on him,” she said, adding that he didn’t want the situation to be posted on social media.

Finally, she said, “Look, no one’s going to come knocking on the door to give you a kidney.”

Neither of Stoney’s two adult daughters qualified since the condition is hereditary. Sheila said she didn’t qualify due to having melanoma, and one of her two daughters tested but also didn’t qualify. The process of testing donors drags on for months and months.

“We were thinking, ‘Dialysis is right around the corner,'” she said. “Stoney was slowly getting worse and worse. You do lose hope.”

But during Father’s Day weekend, the family met Melanie Thomas Marshall, an old church acquaintance of Sheila’s from at least a decade ago and Stoney’s future kidney donor. Sheila said Marshall, who lives in Cleveland County, messaged Sheila on Facebook with the news and told her God was calling her to be part of this story somehow.

Sheila found out on a Wednesday and quickly planned a surprise party to share the news with Stoney that weekend.

Stoney was convinced it wasn’t going to work out. But when he found out the news, “he went to his knees.”

“It’s just amazing how things work out,” Sheila said. “There is hope out there. Not just for a living kidney donor, but for anything you’re going through.”

Sheila said along the way many questioned why she was advocating for someone who didn’t take care of himself. But she reiterated that’s not the case. Stoney wasn’t overweight, a smoker or diabetic.

“At the end of the day, my husband says, ‘I’d probably be dead if it weren’t for you,’” Sheila said.

Sheila said receiving a kidney from a dead person is riskier than a live donor because the kidney could be impacted by health problems experienced by the deceased person.

While the pandemic made the monthslong process even longer, another setback for Stoney arrived when he thought he may have bladder cancer. But after multiple tests, it was determined he didn’t.

Stoney recently had one kidney removed in early September to make room for his donated one. He’s currently on dialysis and has the kidney transplant scheduled for Oct. 21. Sheila said he will have his other kidney removed after at least a year.

And she happily shares his story in hopes that it could bring awareness to the importance of live donors.

“If we could get one story out there and it touch one person … for goodness to come out of 2020, this crazy world we’re living in right now,” Sheila started, “there is hope for others regardless of what they’re fighting.”