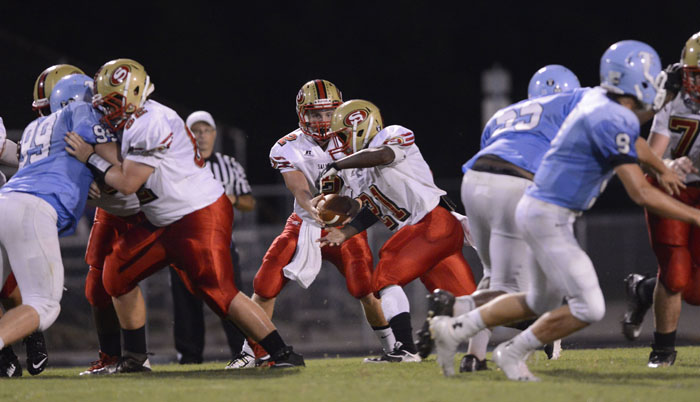 Salisbury's Riley Myers (2) hands off to Willie Clark (21) the last time the Hornets faced West Rowan in 2014. File photo by Wayne Hinshaw, for the Salisbury Post

SALISBURY — Twenty-five states are playing football now, with only a handful of scattered COVID-19 issues reported.

Maine and Michigan are scheduled to join the gridiron fun this weekend, with South Carolina and Wisconsin ready to rumble the week after that.

While NCHSAA schools aren’t scheduled for football contests until late February, some of the high-profile private school programs in North Carolina — Charlotte Christian, Charlotte Latin, Country Day — plan to kick off their seasons on Sept. 28 with fan-less football.

The most exciting thing to happen recently as far as local football was West Rowan releasing its seven-game regular-season schedule on Monday.

What made that intriguing was seeing that the Salisbury Hornets are the opponent for opening night — Feb. 26.

That clash of titans is set for historic Ludwig Stadium. Hopefully, fans will get to witness it. It will be a perfect way to welcome football back.

West has set the bar for the county most years, during the last two decades, while Salisbury, coming off a state runner-up finish in 2AA, has returned to prominence and is building a powerful program.

The schools haven’t squared off in football since 2014 when the Falcons demolished the Hornets, 44-7, but the current Salisbury squad bears no resemblance to 2014.

Salisbury’s 6-foot-3 junior linebacker Jalon Walker is rated as the second-best prospect in the state in the Class of 2022 and is a top-70 player nationally. He has his pick of colleges, including Clemson, Alabama, LSU, Ohio State, UNC and Notre Dame, to name a few. He didn’t do anything to hurt his stock at a showcase event in Matthews over the weekend where he was named the camp’s top linebacker.

West’s latest winning streak against Rowan County opponents now stands at 16, but it’s going to be a challenge to push it to 17.

To find the last time Salisbury beat West Rowan on a football field, you have to go back to 1996. Starting with a 12-0 victory on opening night in 1997, the Falcons have beaten the Hornets 14 straight times.

West’s other non-conference game will be against traditional rival Davie. You have to go back to 2000 to find a season when West and Davie didn’t play. Always an exciting game and always a great gate.

West’s lengthy streak of playing Mooresville will end, however.

Davie’s schedule is missing a couple of traditional foes — Page and North Davidson,