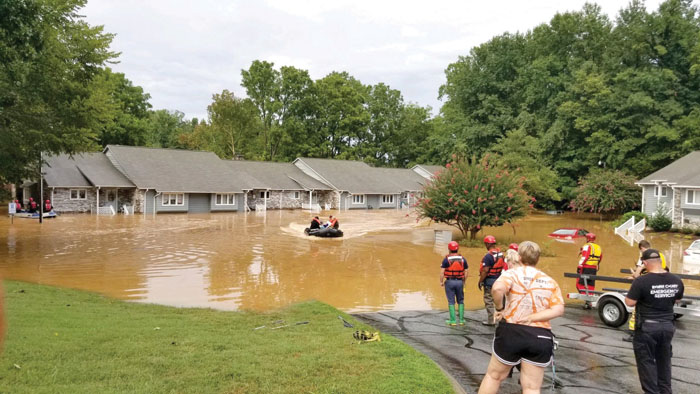 salisbury post file photo This photo, taken by Greg Miller on Aug. 31, shows rescue crews helping people get out of their flooded homes Monday after heavy rains flooded Wellington Hills, a neighborhood in Salisbury. A creek nearby overtopped its banks and submerged cars, carrying one away.

SALISBURY — The city’s stormwater master plan is nearing the end of its first phase and will soon identify areas in most need of stormwater infrastructure repairs.

In November 2019, the city contracted with HDR Engineering to analyze and develop a strategy for the city’s stormwater needs. The scope of the work includes analyzing call volume and history, collecting field data and reviewing previous infrastructure repair projects and other historical markers.

Gaiski-Weitz said that stormwater issues currently are identified after citizens file concerns, either by using an online portal on the city’s website or by calling the city’s stormwater division. Citizen comments drive current stormwater management studies and planning efforts, which then drive the Capital Improvements Program.

While stormwater management plans won’t eliminate flooding, they can keep flooding from happening as regularly, he said.

The project is currently in the end of the first phase and identifying areas of focus before beginning a second phase. In the first phase, existing stormwater systems were evaluated by reviewing capacity and their condition. Work also included identifying flood-prone areas and water quality issues. Gaiski-Weitz said the team will host a public meeting to present phase one findings to the community and receive feedback on the areas that should be included in the long-term master plan.

Those areas would include the ones most at-risk or most consequential in the event of a system failure.

In the second phase, Gaiski-Weitz said the Stormwater Master Plan will outline which focus areas should become capital projects and the required stormwater budget needed for the program.

Tester did not elaborate on which areas had been identified, adding that the team hasn’t yet reached a point of defining which areas are of priority. But one area that “wasn’t on the radar” originally, he said, includes Wellington Hills Circle. In late August, at least six people were rescued from their homes after rain flooded the Wellington Hills subdivision and Sacred Heart Catholic School, which are part of an area off North Jake Alexander Boulevard.

Tester added that the system at Wellington Hills held up well during the rain, but the rain event was just too intense.

Council member Tamara Sheffield asked about the current progress on projects approved in the stormwater fund, which totaled $1.89 million in the 2020-21 fiscal year budget. Tester said a Sunset Drive project should be “moving forward anytime now,” and that the city is only awaiting a schedule from the contractor. The Sunset Drive project includes three phases designed to reduce flooding to nearby road and houses. The city has not yet reached the bidding phase of a McCoy Road Project.

“I’d be proud to nominate both of them,” said council member David Post. “They’re both wonderful, competent people.”

Alexander told council members she has been informed that the city will have more than $200,000 in additional U.S. Housing and Urban Development funding to add to its recently awarded $150,000 grant for the Rowan County Housing Authority. The $150,000 grant was received in April from the federal CARES Act.

Alexander said she will provide additional details on the grant soon before council works together to determine who will receive those funds.

Both Mayor Pro Tem Al Heggins and city manager Lane Bailey were not present for the meeting. Alexander asked to “include both of them in our prayers” as they’re feeling under the weather.

• The council approved an ordinance extending the corporate limits of the city to include a 22-acre tract, parcel 151, where Rowan Woodland Apartments is located. A public hearing for the annexation was held at the Sept. 1 meeting. While the current tax value of the property is undetermined, the plan for the space is to develop 240 units. And based on an adjacent property with 176 units and a tax value of $10 million developed by the same company, it’s estimated the property being annexed would generate $72,285 in property tax revenue for fiscal year 2020-21. Once developed, the city would incur additional costs for police and fire protection, which has also not yet been determined.

• Council members approved an ordinance amending Chapter 13, Article X of the city code related to “no right turns on red” for the intersection of West Innes and Church streets. While the intersection has historically had a slight distance obstruction, which prevented safe turning for vehicles, the city has received permission from North Carolina Department of Transportation to remove the restriction.

• The council approved a right-of-way encroachment by AT&T for the installation of directional bored duct on North Main Street near Liberty Street.

The NCDOT must approve encroachments along state-maintained roads. Staff review included input from the city’s Engineering and Public Services departments, along with the Salisbury-Rowan Utilities system. All improvements and restoration will not involve any costs to the city, and a $20,000 bond will be required prior to construction.

• Additionally, applications for the 2020-21 Historic Preservation Incentive Grants are now available. These matching grants are available on a competitive basis for exterior projects on owner-occupied houses in Salisbury’s four residential local historic districts, including North Main Street, Brooklyn South Square, West Square and Ellis Street Graded School. Applications are due by Sept. 25. To receive an application or inquire about eligibility, call 704-638-5212.

• The Salisbury City Council canceled its special meeting, scheduled for Wednesday at 6 p.m.