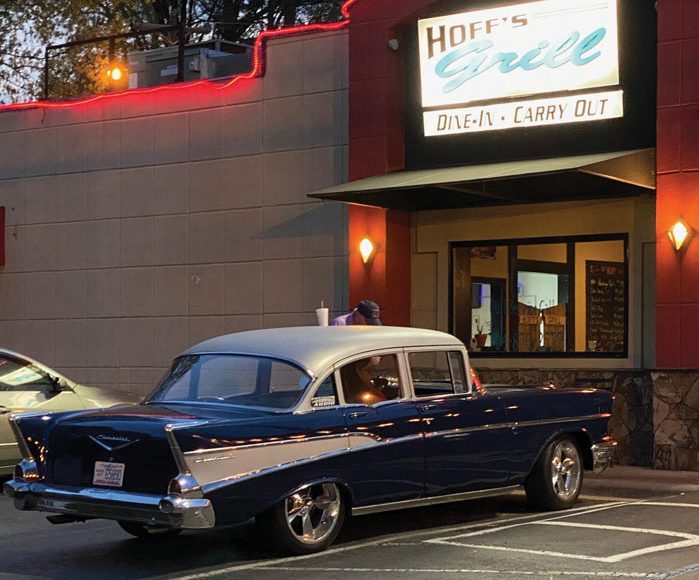 Ben Stansell/SALISBURY POST Hoff’s Grill on West Innes Street is among businesses hoping for more classic cars to show up from the cruise-ins.

SALISBURY — As Evelyn Medina walked out of her shop on North Main Street a couple weekends ago, she was excited to see people watching and admiring the brightly painted show cars and trucks that filled the streets.

Medina was watching a cruise-in, an event where owners of vintage cars parade them around a specific area. Downtown Salisbury has seen multiple cruise-ins over the last month, most of them taking place on Friday and Saturday nights.

Most people would appreciate the spectacle and perhaps take a minute to examine the cars before moving on. Medina, the owner of Mean Mug coffee shop, immediately saw the event as an opportunity.

“When I was closing my store at about 8 o’clock that Saturday, I glanced down toward the courthouse and it just seemed like there was an enormous amount of traffic and movement,” Medina said. “I thought, ‘That needs to be capitalized on.’ ”

A few days after that moment of epiphany, Medina decided to make a change in her coffee shop’s hours. Instead of closing up around 7, she would stay open until 9 to give people a place to grab a coffee, beer or wine while enjoying the impromptu car show.

“We’re happy and excited that they’re out here,” Medina said. “It’s refreshing to see some activity.”

Medina is far from the only downtown restaurateur or retailer who has enjoyed the extra business that the cruise-in events have generated. To business-owners like Larry Roth, the cruise-ins have been a welcomed sight in a year that has been largely devoid of weekend events that bring in foot traffic.

“I know the calendar has been pretty empty,” the Shuckin’ Shack owner said. “We’re getting people who are coming in off the sidewalk for the first time saying ‘Wow, we didn’t even know this was here.’ We have benefited from it. Not so much food wise, but there have been more people who have come in and bought drinks and sat at the bar.”

Like Roth and Medina, Dennis Lunsford, the owner of Kitchen Store, views the cruise-ins as a way to reach more customers. He’s also extended his weekend hours, giving people passing by a chance to check out his culinary wares at a time when they normally wouldn’t be able to.

“It was a no brainer when you see how many people were showing up,” Lunsford said. “I had some sales from it last Friday and Saturday before I closed. I’d already made the decision to start staying open later then. You have to work around the customers’ hours.”

Even restaurants a few miles away from downtown have seen benefits from the cruise-ins, including Hoff’s Grill on West Innes Street. Since they already stay open until 9 p.m. on the weekends, Hoff’s owner Jolene Houchins decided to accommodate the cruise-ins in a different way: by offering a 20% discount for those who pulled up in their sports cars or vintage trucks.

“I would love to see more of them up here,” Houchins said. “I just thought whatever I could do to help them, I’d do. If I had a food truck to bring down there I would.”

Hoff’s began offering the discount on Friday night and, despite a rainy evening in which fewer cars cruised downtown, they did see a few customers stop by in hot rods.

While it appears that the cruise-ins will continue, a message posted earlier this week by Salisbury Police Chief Jerry Stokes to the cruise-ins Facebook page has placed the event’s future somewhat in doubt. Stokes said that police will work to regulate alcohol consumption and noise levels during the cruise-ins, but he added that he was happy to see the event taking place.

Houchins said that she hopes the cruise-ins will continue, both for business and for people to have something to look forward to.

“The socialization that it’s bringing is what we need to come together as a community,” Houchins said. “We can’t just have bad things presented. I know that there’s a couple bad apples, but I hope we can work those out so we can continue this. If they want to come down and get something to eat, stop here and get you some food and we’ll give you a discount.”