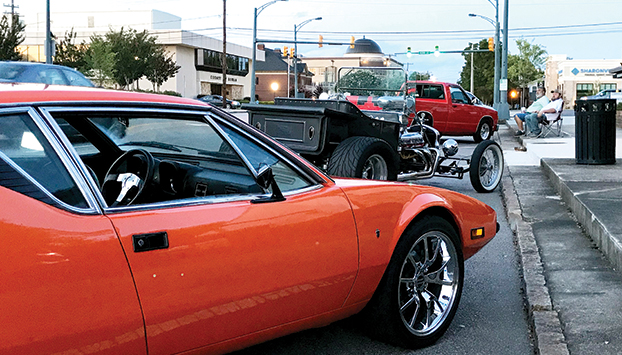 Stokes on Tuesday posted his message in a Facebook group that has attracted more than 2,000 members called “Salisbury Downtown Draggers & Cruise-in Info.” The group has been a location where people have shared details of the cruise-ins, which have occurred on Fridays and Saturdays, as well as photos and messages after the events. The city of Salisbury later distributed the message online, too.

Stokes said he was happy to see the gatherings of auto enthusiasts as well as what it has done to help the downtown area. Stokes said he lives within a few blocks of Main Street, got dinner downtown during one of the cruise-in events and didn’t see anything concerning.

“However, as the word spread and the event grew, it appears a few people came and began to act in ways I could not ignore,” Stokes said in an email to the Post, adding that action needs to be taken before things get out of control.

There have been complaints from residents and visitors about racing, public consumption of alcohol and noise from screeching ties or modified engines. Stokes said events can continue if they do not violate certain city ordinances and state laws.

“I believe I made it clear, the SPD isn’t prohibiting the gatherings so long as they follow some commonsense rules,” he said.

• Unlawful consumption of beer, wine or liquor on property owned by the city, including public buildings, streets, sidewalk, alleys, parks and parking lots.

• Loud, disturbing and unnecessary noise from modified engines, revving of engines and the screeching of tires.

• Reckless driving, including speeding in congested traffic and screeching tires.

• Cruising, which Stokes said encourages engine revving and racing. The Salisbury Police Department will designate the area downtown as a “no cruising area,” he said.

Salisbury’s cruising ordinance specifically says “no person shall drive or permit a motor vehicle under his care, custody or control to be driven past a traffic-control point three or more times within a two-hour period from 6 p.m. to 4 a.m. … in or around a posted no cruising area.”

“It was some 30 years ago, well before my tenure as chief, that Salisbury enacted a cruising ordinance to prohibit the heavy traffic that was impacting businesses in downtown at the time,” Stokes said in an email. “It was less about those living downtown as I understand it. Today, the issues seem to be more about the increased number of residents in downtown and how noise and quality of life issues impact their peace and well-being.”

Stokes said the Salisbury Police Department encourages car enthusiasts to use public parking spaces to display their cars and raise hoods to show engines. Stokes said parking problems for open businesses and their customers would be addressed if they arise. He encouraged people to social distance and wear masks when appropriate.

“I don’t aim to make this a major enforcement activity. If the warning and the extra police presence calms everyone down and keeps those intent on behaving negatively away, then all will be good,” Stokes said in his email.

One common immediate reaction to the post involved comparing the recent cruise-ins to protests for racial justice that have taken place in Salisbury.