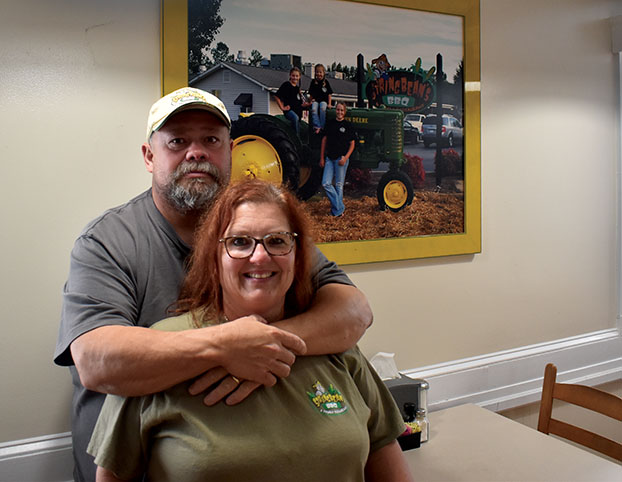 Dawne and Raymond Stafford stand in front of the picture of their three daughters that is hanging on the wall in their recently reopened restaurant. Family has always been a major part of their restaurant operation. Ben Stansell/Salisbury Post

LANDIS — When Raymond and Dawne Stafford closed Stringbean’s BBQ and Family Restaurant in the middle of the 2009 recession, they didn’t know if they’d ever serve dine-in customers again.

Coffee mugs carrying the restaurant’s green logo were stashed in their basement. The large road sign was packed away in storage. They remained there for over a decade.

Then, a few months ago, the Staffords were given a chance to go back into the sit-down restaurant business.

The opportunity to give in-person dining another try came out of both perfect timing and necessity. Since closing their physical restaurant more than 10 years ago, the Staffords have become a staple at local sporting events, supplying concessions for football games and other athletic competitions at A.L. Brown and Cox Mill high schools, as well as catering other events.

But when high school athletics were put on pause due to COVID-19, the Staffords were forced to change course.

“We didn’t know if or when concessions would start back up, so we decided that we would do dine-in one more time and come back home,” Dawne said.

“Home” is the original building near downtown Landis where they first opened Stringbean’s in 2006. And it just happened to be vacant when the Staffords were looking for a place to reopen.

“When this fell back in our lap, it was just too good of a deal to pass up,” Raymond said.

They went down to the basement and unearthed the mugs that’d been sitting there. The Stringbean’s sign, held in storage since the restaurant’s closure, once again welcomes customers back to the familiar eatery. 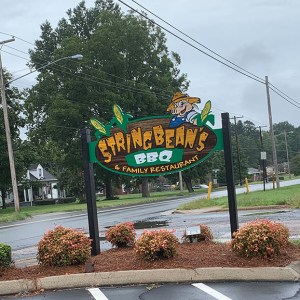 Like the restaurant’s name, the Stringbean’s logo was inspired by the Hee Haw television show and was created in part by one of Dawne and Raymond’s daughters. Photo Submitted.

For many people, it was about time that the Staffords reopened a physical location where customers could enjoy their cooking anytime of the week, not just during a football game on Friday night.

Dawne and Raymond have been questioned about when or if they were going to open a physical location again since they closed the last one. While serving up chili dogs, cheese fries and hamburgers under the Friday night lights, Raymond said he was constantly barraged with questions.

“I’d get it all the time on Friday night,” Raymond said. “‘When are you going to open? Will you cook me some ribs?’”

Even when the Staffords went on vacation — a family trip to Myrtle Beach that they take every year — they couldn’t escape the inquiries. On their way down, it’s tradition to stop at a Bojangles in Bennettsville, SC. It just so happened that other Rowan County locals stop at the same place. When they bumped into the Staffords there, most of them had one question.

“I think that 10 of the last 15 years that we’ve stopped there, at least one person has asked us when we’re going to open back up the restaurant,” Raymond said.

Readjusting to a restaurant kitchen from a concession stand has been a process for Raymond, but it’s one that he’s embraced.

“It’s been a challenge coming back 15 years later. Some of the things you did before, it’s not the same, but a lot of it is,” Raymond said. “Some days I’ve asked myself in the past month, ‘What are you doing at 55 doing this?’”

It’s always been one of Raymond’s dreams to have a restaurant of his own, since the days when he was a child watching his grandfather, Earl, run a barbecue joint in Kannapolis. Realizing that dream again, Raymond said, makes the 14-hour days worth it. 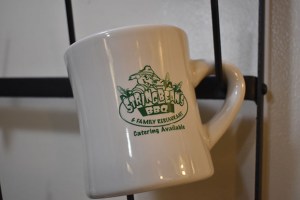 The mugs that Stringbean’s serves coffee in today are the same mugs that were used in the original restaurant. They have been kept in storage for over a decade. Ben Stansell/Salisbury Post

Now that Stringbean’s is reopened, many of its old customers have returned. They’ve come back to find the restaurant still serving the same country fried steaks, ribs and chicken and dumplings that they loved before.

The roots of many of these recipes, like the well-known Sundrop pound cake, can be traced back generations. Raymond’s grandma, Lucille, was the originator of the soda-inspired pound cake. It was eventually handed down to Dawne, who has since passed the whisk to her daughter, Hannah.

“I used to make it the first go-round. I used to make all of that, the brownies and no-bake oatmeal cookies. I have since handed that responsibility down to Hannah,” Dawne said. “She gets a lot of compliments. They ask me if I’m still making it.”

“One day, maybe we could be like Cracker Barrel and have a bunch of different locations,” Raymond said.

For now, the Staffords just want to keep giving people a place to eat that feels familiar.

Even though Stringbean’s hasn’t had a physical location in years, the restaurant is still ingrained in the community. The diner has several memorial walls, which are dedicated to members of the community that have passed on. Pictures of relatives, including Grandpa Earl and Grandma Lucille, hang on the walls as well. It’s small touches like that, Dawne said, that make people feel like they’re at home. 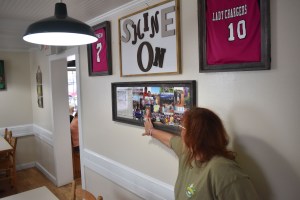 Dawne Stafford explains the story behind one of the restaurant’s memorial walls. This wall is dedicated to the life of Sheyenne Marshall, who was killed by an impaired boater on Lake Norman in 2015. Ben Stansell/Salisbury Post

“We try to have it where everyone who comes in feels like its home,” Dawne said. “Like they’re eating with family.”

Stringbean’s is open Tuesday — Saturday from 6:30 a.m. until 8 p.m. More information on the restaurant can be found on its Facebook page.