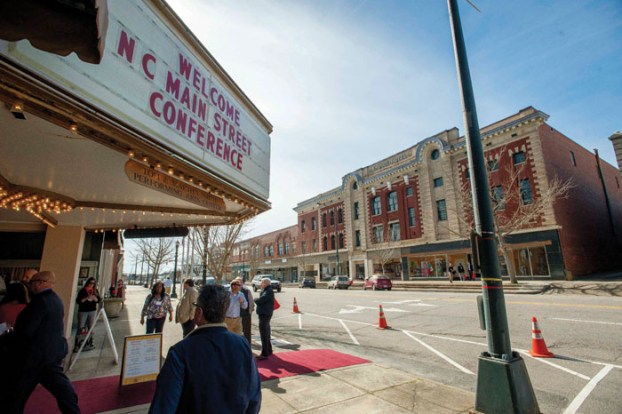 JON C. LAKEY/SALISBURY POST The N.C. Main Street Conference brought people from across the state to Salisbury in 2019 with presentations at the Meroney Theater and tours of the historic Empire Hotel, which is undergoing redevelopment. Jon C. Lakey/SalisburyPost

SALISBURY — As frustrations about completing the Empire Hotel project grow, downtown stakeholders say the city’s decision to expand its developer search is positive because the project is necessary for future vitality.

While Black Point Investments isn’t completely out of the race to redevelop the Empire Hotel, the city formally notified the company on Sept. 1 that it would end exclusive negotiations with the company after Black Point Investments didn’t accept the city’s second and final offer, which was a $700,000 purchase price valid through Dec. 31. The city rejected the developer’s counterproposal, which asked for a $550,000 purchase price through June 30, 2021 and to deduct permit fees incentives prior the purchase. Such incentives include, for example, fire sprinklers and sidewalk fees, which will be paid by the city.

Negotiations with the firm have been ongoing since 2016, with a goal of redeveloping the historic Empire Hotel into 62 market rate apartments, seven live-work apartments on South Main Street and 13,000 square feet of commercial space in the former Montgomery Ward space.

Bell Tower Green Park President Dyke Messinger said a little competition among other developers may be what’s needed to see the project come to fruition.

“The city has been patient, but a lot of people are wondering, ‘When will this thing be done?'” he said.

There’s no doubt the pandemic has caused problems for many, including Black Point Investments, he said. And Messinger said he understands the current “confusing economic times.” But other developments have continued despite the circumstances, he added.

He said “people are saying ‘yes’ to Salisbury” because they’re seeing the benefit of moving to the area from areas along Interstate 85 and outside of Charlotte.

“It would be fantastic for the city,” he said, adding that tenants who decide to move to the area can spread the word.

City Councilman David Post said he’s frustrated with the process because it seems as if the “goal post” keeps moving. If he had his wishes, Post said, the project would be further along. While he likes Black Point Investments’ principal developer Britt Weaver, Post said he thinks the city should consider other options for the project.

During the previous four years, Post said it felt like the city was often negotiating against itself, to the point where the councilman “was willing to cut the cord” on the project. But he knows there’s demand for living space downtown and that vacancy along the 200 block of South Main Street “hurts all of downtown.”

“We need to get this done because it makes downtown viable,” he said.

But as a council member, he has the responsibility of being a shepherd of taxpayer funds. And while the hotel isn’t the biggest stress on the city’s budget, it’s still an expense.

Post has a background in the commercial real estate market, particularly as senior vice president and director of hospitality research for GMAC Commercial Mortgage. Throughout his time in the market, he saw similar projects across the nation that were renovated well. While every deal has some complications, or “hair on it,” Post said he’s never seen a deal like the Empire not get done.

Now, Post said he sees an opportunity to explore what can be done with the Montgomery Ward space that won’t have the city on the hook paying for it.

“It would be nice to get a tenant in there,” he said.

Lane Yates, CEO and founder of Yates Realty, which has multiple downtown properties, said it’s disappointing the deal hasn’t gone through with Black Point Investments, but that the city “really bent over backwards” to make sure it could secure a developer.

“The city did everything (it) could do,” he said, adding that it “went beyond what any developer’s expectations should be.”

Yates said there should have been more commitment to the deal from the developer. Now, Yates said, the city has a package that’s attractive because many moving parts have been completed. Progress on the project over the years include two brownfield assessments, market feasibility and parking studies. Additionally, the site has been listed on the National Register of Historic Places as part of the Salisbury Historic District, listed as a local historic landmark and is now eligible for historic tax credits.

Yates said being within an opportunity zone is important and opens the doors for potential developers who can view it as an investment.

“It’ll be the catalyst of downtown,” he said.

If the project can be done in tandem with Bell Tower Green Park, it will keep the city’s synergy going, Yates said.

“It doubles the momentum of growth and synergy for downtown,” he said. “Synergy feeds on synergy.”

Pottery 101 owner Cheryl Goins said she’s disappointed the city may not move forward with Black Point Investments, but she’s hopeful. She added that it’s not a bad move on the city’s part since negotiations have been ongoing for years now.

It’s important to have it developed, she said, because it looks like empty retail space to visitors. If completed, the project could generate tax revenue and, ultimately, take an expense burden off of city government.

“Right now, it’s just a bill and an expense,” she said.

In an article published online Tuesday, Weaver said he’s “never walked away from a deal.” He plans to still make the deal work because he feels Black Point Investments is the best fit for the project.

The city, along with Downtown Salisbury Inc., have formed an Empire Development Task Force to continue its search for a developer. Whitney Wallace Williams, who recently finished her term as chairperson of DSI, said there will be a meeting Sept. 16 at 8 a.m. to decide who will comprise the task force. Many have said they want to be involved, and Williams said the task force’s goal is to ensure it’s inclusive and diverse. The task force will also work to create a vision based on its view of why the property was purchased, what type of developers should be recruited and what the city wants out of the project.