Knight Drive-In sees success with its movies during COVID-19 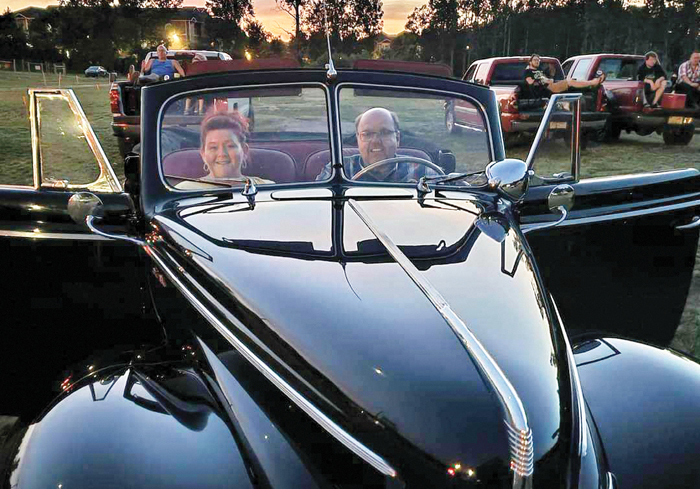 Two moviegoers in a classic car enjoy a show at the Knight Drive-In as the sun sets behind them. Photo submitted by Linda Knight.

SALISBURY — It started with a date night.

When Linda Knight and her husband were thinking about where they should spend their night out on the town, Knight had an idea. What about a drive-in movie?

Except, there wasn’t a drive-in movie for them to go to nearby. In 2018, Knight changed that.

“It was created in order to have something to do,” Knight said. “My husband and I are always doing date nights. We tried to do a date night where we go out and hang out. I was like ‘You know, if we had a drive-in, we could do a date night there and maybe other people could come out.’”

Knight started showing films on a screen at the Rowan County Fairgrounds. At first, attendance was slim, but soon numerous cars filled the grassy field on Friday nights to watch a movie the old fashioned way. The movie showing continued until a string of bad weather made it difficult for the Knight’s to put on a good show. They decided to halt the drive-in movies — until this spring.

“I said that we needed to crank it back up when COVID-19 hit because you could still practice social distancing and go do something with your family and kids,” Knight said.

Knight teamed up with the Rowan County Fairgrounds, working with fairgrounds manager Randall Barger, to put on the shows. There was even a massive screen built for the movies to be shown on in the lower field of the complex. Last month, the fairgrounds relinquished control and left it up to Knight and her team. After successful showings, Knight said that she donates money back to the fairgrounds.

“They’ve been so kind in working with us,” Knight said. “We’re just trying to provide something that the community can do so we can give them an outing without going against the governor’s social distancing restrictions.”

At first, only a handful of people showed up for the screenings during COVID-19. But soon, Marcel Bellamy, who runs the drive-in’s social media accounts and works as the gatekeeper, started seeing larger crowds. Bellamy told Knight that they’ve had more than 100 people show up to one movie this summer.

Along with the show, concessions are available at the events. Vendors peddling cotton candy, popcorn, candy apples and other snacks typically set up next to the cars. Knight has her own stand at the event, selling the same grilled pork chops that are a popular menu item at her new restaurant, Belly’s Diner.

In order to determine what movie they’re going to show, Knight and Bellamy set up polls on their social media pages to get people’s input. They’ve recently shown Bad Boys II and Couples Retreat, among other titles. Knight Drive-In was scheduled to show Jaws on Friday night as a part of Rowan County Creek Week, but troubling weather washed out the event. Rain, which forced Knight to close the drive-in originally, is still something that she has to deal with.

“The only thing that was a down side was the fact that if it rains, it just shuts us down,” Knight said. “If we can get beyond the rain, we’re good to go.”

Knight said that she plans to keep showing movies throughout the fall and winter.

“I want to see what it will do,” Knight said. “If the weather permits, we’ll try to do it as long as we can until the COVID-19 backs off.”

Labor Day golf better than ever