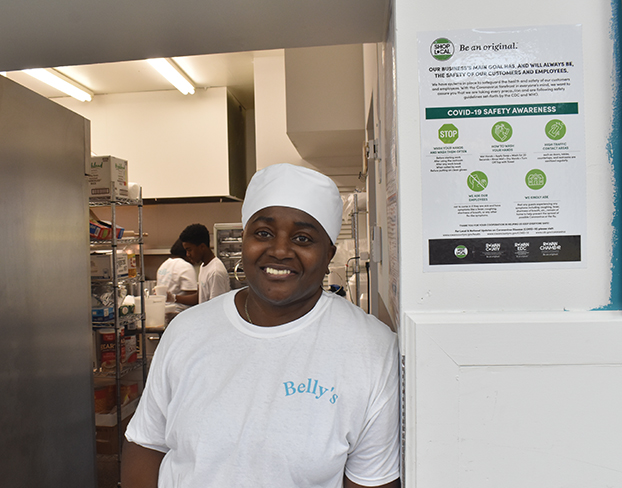 Linda Knight smiles as she stands in front of her new kitchen at Belly's Diner, her latest culinary endeavor. Ben Stansell/Salisbury Post

SPENCER — Linda Knight cooked all her life, but it wasn’t until she moved to Germany that she really hit her stride.

A Salisbury native, Knight learned how to cook from her mother Louise “Wheezy” Smyre. From a young age, Knight began to master her mom’s recipes, learning how to make everything from collard greens to chicken and dumplings. Knight, called “Queen” by her friends and family, always loved her mom’s food. So, when she moved with her husband to Germany, where he’d been stationed in the military, she brought her mother’s cooking with her.

Soon, the entire base loved her mom’s cooking too.

“Word started to pass around, and I started cooking for colonels and other officers,” Knight said.

After returning to Salisbury in the 1980s, Knight decided that she didn’t want to stop cooking for people.

“I love cooking for people,” Knight said. “I love serving.”

Since then, Knight has operated several restaurants and run her own catering business. Her newest culinary venture, called Belly’s Diner, had its official grand opening on Wednesday.

The restaurant held a soft opening over a month ago and has been serving up soul food staples since. Even though Belly’s has temporarily closed its dining room due to COVID-19 health concerns, Knight is still pleased with the restaurant’s success thus far. Belly’s has leaned into its takeout business and allows diners to eat on its outdoor patio.

“We’re doing well right now even when it’s supposed to be a struggle,” Knight said. “But it’s really not a struggle.”

Knight was surrounded by her family at the ribbon cutting ceremony on Wednesday. That’s the way it normally is. Above all else, Knight said that Belly’s is a family restaurant. Her children, grandchildren and other family members staff the restaurant. Even one of her 3-year old grandchildren has found a role working at Belly’s.

“They all work here, even the little one,” Knight said. “Even if all she does is say ‘Order up, please.’ She does it really well.”

Knight had been considering opening another restaurant with her family for a long time, but when COVID-19 left her out of a job, she decided to go for it.

“I took a job, was asked to come and mentor Jackie Kelly at Hood Theological Seminary so I was up there doing that,” Knight said. “Then COVID-19 came in and put us all out of work. I said ‘Oh, let’s open up a restaurant now.’ Sometimes, a pandemic doesn’t necessarily mean to stop. It opened up a window for me.”

After looking at a couple other locations, Knight settled on Belly’s current home at 302 Salisbury Ave. in Spencer. Rowan County Chamber of Commerce President Elaine Spalding said she is excited to see a new business open in a part of the county that hasn’t seen many new developments recently. Most of the business expansion lately has been south of Salisbury, Spalding said.

“It’s just really exciting to see a business open especially here in northern Rowan,” Spalding said. “We really hope that all of our communities across Rowan County have businesses opening up. Hopefully in the coming weeks more restaurants will be able to open fully. Even now, if they practice social distancing and safe practices, a lot of them are doing extremely well.”

Knight said she wishes that her mother could’ve been at Belly’s grand opening, but she passed away in 2017. Still, Knight keeps her mother’s memory alive every time she grills a pork chop or prepares yams. Knight even has a specialty drink that’s named after her mom. Called “Punch Wheezy,” the beverage is a tropical mix of ingredients that Knight keeps close to the vest. Knight served “Punch Wheezy” at Belly’s ribbon cutting ceremony.

Eventually, Knight said, she wants each of her grandchildren to have a Belly’s diner of their own. And Knight said that she plans on being around to see it.