David Freeze column: Found — the site of a historic mill 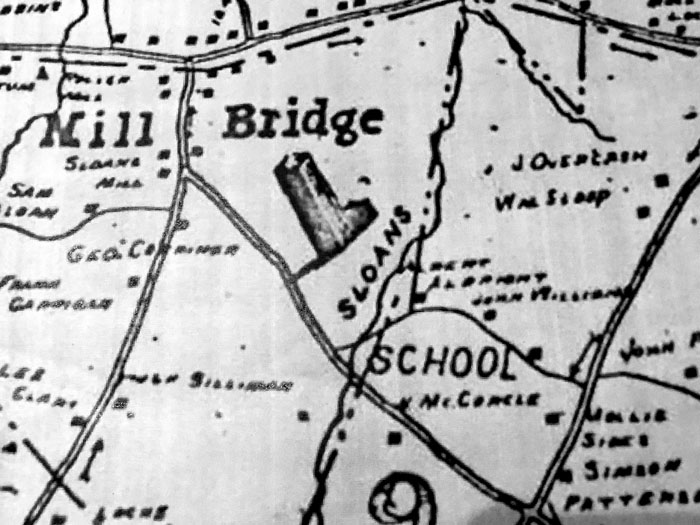 For most of my life, history has fascinated me. I read all the time, book after book, and most have some historical element. And I’ve been fortunate to see at least some portion of all 50 states by bicycle, always searching out historical sites along the way.

With all that said, a great mystery has been unfolding less than a quarter mile from my farm. I heard a few years back from a landowner on Millbridge (note the spelling) Road something that went like this, “Oh, you bought that farm where the pre-Civil War mill used to be.” I listened, intrigued, but asked for more info with no results. My farm is located on Weaver Road, between Millbridge and Patterson Roads.

A handful of years passed by. I figured the phantom mill had to be water driven and my land is bordered by Sloans (listed this way on the map) Creek. I borrowed a metal detector and walked along the creek on my side, finding lots of hits, but nothing above ground. And nothing that looked like an old mill site. The search was on my mind, but not at the top of my to do list, until the past few weeks.

After a conversation with a neighbor on the other side of Sloans Creek, I got the OK to go check out the area from their side. What I found was a much wider and deeper pool of water with huge, non-native rocks, some as big as a small truck bed that seemed to have been placed just beside and into the bank. There is also a small dam.

I live less than two miles from Mill Bridge community and have for 35 years. I knew a little of the area history and much about the famous Kerr Mill at Sloan Park. After mentioning my quest for the history of another mill to longtime area farm residents Buddy Hoffner, Bobby Harrison and Ollie McKnight, a certain level of excitement began to drive us all. Add in Brooke Taylor and Gretchen Witt from the Rowan Public Library and Ed Hall of Thyatira Presbyterian’s history room and we got some things going. Buddy came up with a most riveting book, “Kerr Mill and the Mill Bridge Community” by Bruce Cheeseman, that was published 41 years ago in conjunction with the Rowan County Historical Properties Commission. 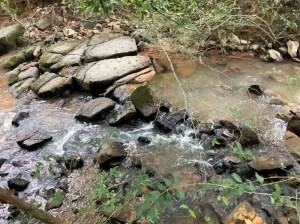 After reading the book twice through, I was more than amazed at the history of the area. Cathey’s Settlement was populated by a group of farmers from Pennsylvania and Delaware area in 1747-48. They followed an old Indian trading path to this area, especially happy with the quality of the soil and the available water. At the time, Salisbury and especially Cathey’s Settlement were on the frontier, with the area west controlled by the Cherokee and Catawba Indians. Rowan had been virtually uninhabited until the late 1740s. Explorers considering heading west had those Indians and lack of livestock feed as huge issues.

Almost immediately, just 10 miles west of Salisbury, considered by some the best town in the state, this little band of settlers began to grow. They built a water-driven grist (for grinding flour) mill called Cathey’s Mill. which can no longer be located. In the 1790s, several larger plantations began to dominate the area. In 1822, the Kerr family built their plantation home and then followed the next year with the mill that is now the centerpiece of Sloan Park. Most, but not all, of the productivity of that mill was used for the plantation.

By about 1850, Cathey’s Settlement had become Mill Bridge and was a productive community with about 175 families, two general stores, a school for children, a resident doctor and eventually a post office. Near the junction of the “Trading Path” from the James River in Virginia area and the “Great Wagon Road” from the Shenandoah Valley in Virginia, Mill Bridge was thriving.

John Locke Sloan built a second water-driven mill, this one intended as a merchant mill, meaning that the mill was open to the public. He chose Sloans Creek for the site, near Weaver Road and not far from Millbridge Road. In the April 9, 1885, issue of the Carolina Watchman, a traveler described the area with all the amenities mentioned above. He also described that second mill, “One of the finest flouring mills in the county, owned and operated by JL Sloan and Son, who are doing a very fine business.” The mill also provided cornmeal and livestock feed.

Sloan later added a steam-powered flouring mill, a sawmill and a cotton gin, although it appears from the 1903 map that these ventures were located about a half mile away. John Locke Sloan remained one of Mill Bridge’s leading citizens until his death in 1901. Sloan Mill probably had a lesser capacity than Kerr Mill, producing about 2/3 the volume of flour of its nearby competitor in 1860. One of John Stone’s sons bought Kerr Mill in 1908.

Thyatira Presbyterian Church remained as Mill Bridge’s community center, but farmers gathered at the local mills to exchange information on new farming methods, political opinions and some plain old gossip. Milling establishments usually were paid by an in-kind arrangement where 10-20% of the grain was kept to sell to others without grain and in need of mill products.

In the 1880 census, Rowan ranked first statewide in the production of oats and hay and second in Indian corn and wheat. The N.C. Department of Agriculture called Rowan the finest grain growing county in the state.

So, a decade later, I’ve found the mill site. There is still some exploring and digging to do, a neighboring landowner to inform and maybe a little dreaming too. Just as another friend said, “What if we could somehow go back and visit that mill in 1860?” I sure wish we could.