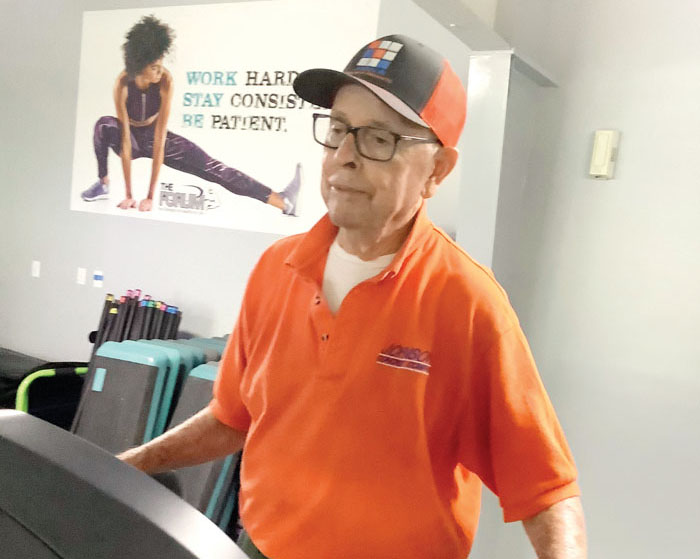 Charles Newsome regularly uses the treadmill at The Forum to measure his pace and incline. Photo by David Freeze, for the Salisbury Post.

Sometimes things just don’t work out. I had mentioned earlier that the hot and humid days of summer are hardest for exercise beginners if at least part of the work is done outside. Robin Satterwhite and Isaac Miller are no longer in the Post wellness program after expectations from me and results for them went in different directions. I certainly wish them success going forward.

My focus since late July and now into August has been on other clients. One of those is Charles Newsome, an 83-year-old longtime resident of Rowan and Salisbury. Charles has managed Johnson Concrete for more than 51 years and is well known for his missions work through Thyatira Presbyterian Church and other community projects. I met Charles about six years ago on a mutual project but honestly didn’t expect him to call about a desire for better physical conditioning.

Early in July, I got that call and Charles quickly explained that he had another big project in mind, working to become the United States ambassador to Zambia. He’s visited there regularly over about 30 years, much of it involving missions work. Along the way, Charles helped build a hospital, a school and provide electricity and clean drinking water. Charles calls Zambia one of the most beautiful and safest countries in Africa.

Charles has been compiling a large number of congressional endorsements and arranging a move to Charlotte where he will leave his wife, Cris, with friends once he gets the ambassador appointment. But one big thing was also on his mind. Charles wanted to get in better shape knowing that the physical rigors of his job will be demanding.

Charles and I began meeting at The Forum on July 6 and have continued twice weekly since. Our focus has been on cardiovascular and balance work. Charles uses an upright stationary bike and the treadmill and has made steady progress in July and in early August. We also currently use dumbbells and kettle bells. Charles also walks between two and three miles nearly every day and has for about 30 years. Last week, he purchased a step bench and risers for use by both him and his wife. While the treadmill and bike build strength and stamina, the step bench and various leg exercises are focused on balance improvement.

In just one month, Charles has extended his revolutions per minute on the bike from about 65 to a max of over 100 during interval sessions. He has been extremely competitive recently and pushed himself to a fastest walking pace of 3.7 miles per hour while on a 1.5 incline.

With a normal body mass index (BMI), Charles didn’t especially intend to lose weight, but he has dropped a couple pounds so far. Charles said, “I tightened a belt notch and feel lighter on my feet and am able to walk at a faster pace.” Already conscious of what makes a good diet, Charles loves fruit and nuts and limits his sugar and salt intake. He learned this past week about the importance of proper hydration and how it can affect a serious workout. He was already thirsty less than midway through our hour and promised not to let that happen again. At just under 147 pounds, he still needs at least 74 ounces of water a day and more to cover his exercise. A water bottle needs to always be close by.

Encouragement by staff and other members at The Forum has helped boost our success so far. Charles has committed to exercise for life and said, “Because I want to be effective in everything I do, I have always been conscious of my fitness. I want to remain an active part of not only my wife’s life but those of my children and grandchildren as well.”

The Forum general manager Rayna Gardner added, “He has a goal in sight and he’s going for it. We encourage everyone, no matter what their age, to improve their overall fitness for better quality of life.”

Charles reminds me on occasion that he is 83, cautioning about pushing him too hard. The truth so far is that he pushes himself just as much. Charles has already proven that its never too late to decide that success is the reward of effort given, something that we should all realize.

Library notes: Weekly reading together as a family