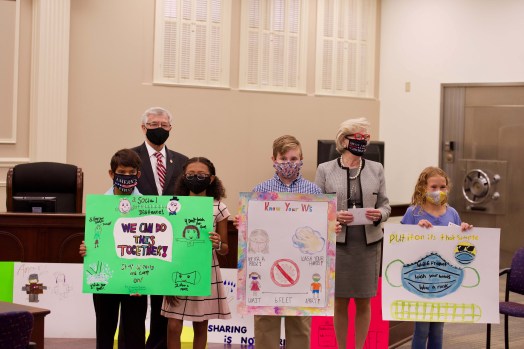 Carl Blankenship/Salisbury Post - Rohan Joseph, Emilia Lopez, Connor Faris and Gwen Hill standing with the winning posters in front of Mayor Karen Alexander and State Rep. Harry Warren. Hill was the only one of the three winners who could attend the ceremony. 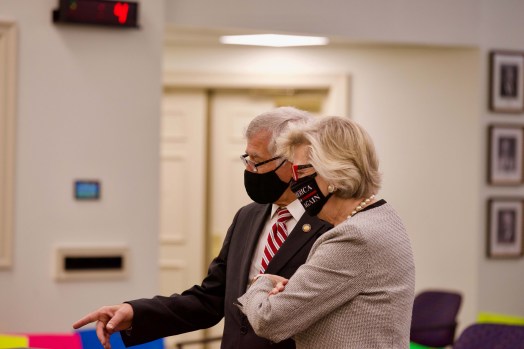 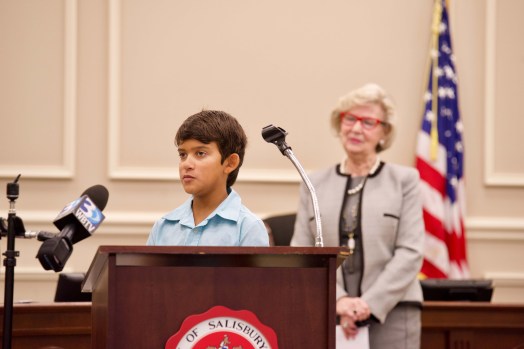 Carl Blankenship/Salisbury Post - Rohan Joseph speaking to the attendees at the awards ceremony. The competition started because of Joseph's interest in the Centers for Disease Control and Prevention guidelines for preventing the spread of COVID-19. 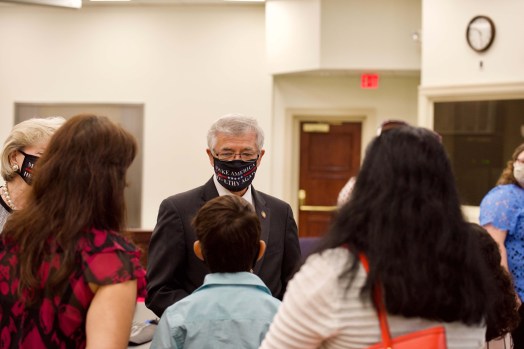 The posters are the result of a competition dreamed up by Rohan Joseph, a rising fifth-grader at Sacred Heart Catholic School. Joseph came up with the idea while brainstorming ways to remind people to be safe.

Joseph wondered if the president could order telecommunications companies to send push notifications to everyone’s cellphones reminding them of the Centers for Disease Control and Prevention guidelines. Joseph even tried to get in touch with the president about the idea, but his mother, Nalini, asked him what he could do to help people locally.

The contest was open to anyone, but targeted at fourth- and fifth-graders, who were eligible to win some small cash prizes if they placed high in the competition.

The competition wrapped on Thursday morning, when Salisbury Mayor Karen Alexander and State Rep. Harry Warren, R-76, met with the organizers and participants to judge the entries at city hall.

Warren said his judging was based on creativity and how effectively the poster got the message across. Alexander, Warren and State Sen. Carl Ford, R-33, all signed a letter of support for the contest. The city provided cash prizes of $50, $40 and $30 for the first, second and third place winners, respectively.

Frankie Tadiello won first place with a poster outlining prevention behavior such as wearing a mask and social distancing. The tagline “We can do this together!” colorfully tied the poster together from the center.

Second place went to Trisha Roy. Her poster advised people to “know their Ws,” referencing the CDC’s advice to wait to maintain 6 feet of social distance, wear a mask and wash your hands.

Gwen Hill’s third-place poster also advised people to follow the three Ws, was spelled out on a mask and contained headline stating, “Put it on, it’s that simple.” Hill was the only of the three who could attend the awards.

All the 50 local organizations who agreed to put up fliers advertising the contest will now host the posters. Every poster will find a home in the community.

Rohan outlined some of the successes and challenges the contest faced with his co-organizers Emilia Lopez and Connor Farris. The group was happy with the number of posters that were submitted and the attention the content received in the Post. Some other highlights included setting up their own email accounts and the support from local politicians.

There were some challenges for the trio as well. The group had to “fire” two kids from the team and they had some difficulty coordinating around summer plans. The group did not get the chance to visit every place they wanted to advertise posters in and were frustrated with friends who said they would make posters but did not. All three made their own posters, but their entries were not part of the contest.

Alexander presented the trio with surprise certificates of recognition for their efforts.

“I just think it’s wonderful,” Alexander said. “It’s such a wonderful representative group of our children as well from diversity of gender and every way. It just thrilled me to support Rohan’s idea when he came to my office earlier in the summer.”

Warren said he was impressed by Rohan and his friends. He described the contest as fantastic and said the group engaged the entire community by getting businesses and kids from different schools involved.

“Any time you’re asked to endorse something you have to remember you’re an elected official and you represent, in my particular case, about 80,000 people. So you just don’t willingly sign anything that’s presented before you,” Warren said. “But I met him and his mother, and he presented the program. He really carried the ball on his own, he explained the program and I agreed with the program.”

Lopez pointed to the media attention to the contest received from the Post and local TV as signs of the contest’s success.

The COVID Busters are sticking around, and may have some new programs in the future, though they do not have more ideas yet.