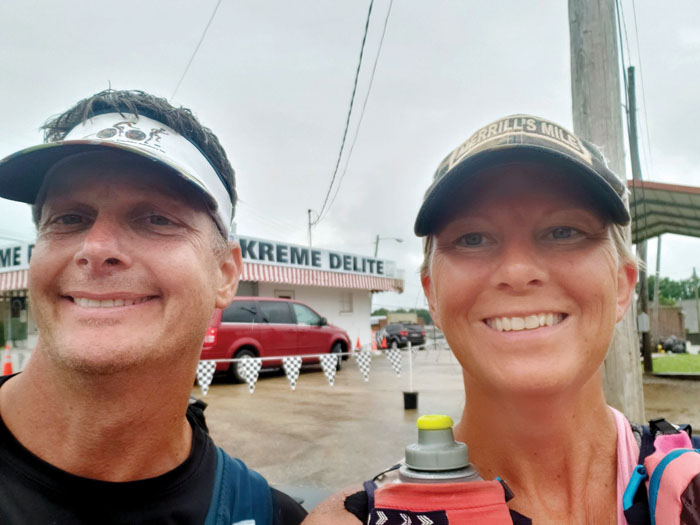 Chris Blumenthal and Tiffany Kravec get donuts in Athens, Alabama.

The Last Annual Heart of the South (HOTS) is a 340-mile unsupported journey run in which participants had 10 days to finish. Participants parked cars at the finish and were transported to the start that began early on the morning of June 18.

The course started in West Memphis, Arkansas, crossed the Mississippi river traveling through downtown Memphis to Lee Highway (U.S. 64), east across rural Tennessee, through Selmer, to Corinth, Mississippi, into Alabama along the Natchez Trace (a 37-mile desert with no services) into Florence, Alabama, then onto Huntsville, Alabama, and finally finishing at Castle Rock, Georgia, atop the Sand Mountain. Participants had to travel a minimum of 34 miles a day with Elvis in his blue-suede shoes chasing them, eliminating those who didn’t make the daily minimum distance.

Chris Blumenthal, a longtime Food Lion fresh demand manager, said, “I entered the race because I wanted to challenge myself amid the mystic of a multi-day journey run, beyond anything I had ever done. I trained for almost 10 months while figuring out gear and preparing for the endurance challenge. Ultraraces in 2020 included 50Ks, a 12-hour run, 40-milers, and the YETI 50-mile challenge. COVID-19 canceled my April and May events. I created my own training with one day trekking from Salisbury to High Point (40 miles) and another 50 miler around Rowan County.”

Participants checked in twice daily as race officials monitored progress and followed social distancing and mask requirements. Some stores along the way closed early causing limited food availability. Dropouts were transported back to the start in the meat wagon.

Blumenthal, 52, said, “We were responsible for everything. Eating, resting, finding water or any other need. This race strips you down to your lowest primal instincts. I found myself either emotionally devastated or laughing hysterically at nonsense. For 10 days, my goal was survival and making it another day. Nothing else mattered more. Battling torrential downpours, mountains, traffic and heat were part of the roller coaster highs and lows.”

The best part of the race was developing relationships with fellow combatants. Blumenthal stayed with a group of six veterans making 50 miles on the first day. Days 2 and 3 brought less when his ankle doubled in size and battled thoughts about dropping out several times. He had to stay ahead of Elvis to avoid being pulled from the course.

Things improved when Blumenthal met another rookie, Tiffany Kravec, an Army captain from Ft. Wayne, Indiana, with vast ultra-running experience. She helped address Blumenthal’s ankle pain and became his battle buddy for the next 250 miles.

The lowest point emotionally came on day 5, with an episode of gout in a toe. Blumenthal said, “After hobbling six miles, my spirits lifted as I came to a doctor’s office. They gave me two shots, told me to stay hydrated and sent me on my way. Leaving that doctor’s office, I knew that no matter what, I was finishing the race.”

Participant Kim McCoy was hit by a car and eventually had her leg amputated. Blumenthal added, “Kim is a tremendously positive person and is rehabbing in NYC. She has a Gofundme page. She’ll have a long recovery but plans on coming back to finish the course, I am sure with plenty of support.”

Small things were celebrated such as leaving busy highways, crossing state lines, finding open convenience stores, and being able to shower, sleep and wash clothes in a hotel. Blumenthal said, “We rested in post office buildings for the A/C and power, filled water from church spigots, saw baby skunks, a bald eagle and more armadillo road kill than we could count. We endured highways with little to no shoulder and drivers that refused to move over. Road angels provided us with ice cold towels, water and food when needed most.”

As the duo started the final 50-mile push up Sand Mountain to the Rock, the motto became “Don’t stop…Won’t Stop.” Blumenthal remembered, “Tired and half-asleep, we made it to the Rock at 1 a.m. on June 28, finishing in a time of 9 days 18 hours. Thoroughly exhausted, I kissed the Rock, sat on the finishers throne next to the campfire and told stories of our adventure.”

Of the 65 people that started, 48 finished. The winner, Bev Abbs, finished in 4 days, 23 hours. Thirty-three people finished in the last two days, and 18 finished on the last day, demonstrating just how hard this course was.

Blumenthal concluded, “Looking back on the race, I had three goals: to finish, smile and have fun. I accomplished all three.”

After resting his ankle for a couple more weeks, Blumenthal hopes to begin running again and wants to race again in September. Unfortunately, COVID-19 may affect fall races with postponement or cancellation. Just like racers everywhere, I will just wait and see what’s next.”

Look for the latest on upcoming events at www.salisburyrowanrunners.org

Many plants suffer in the heat of July