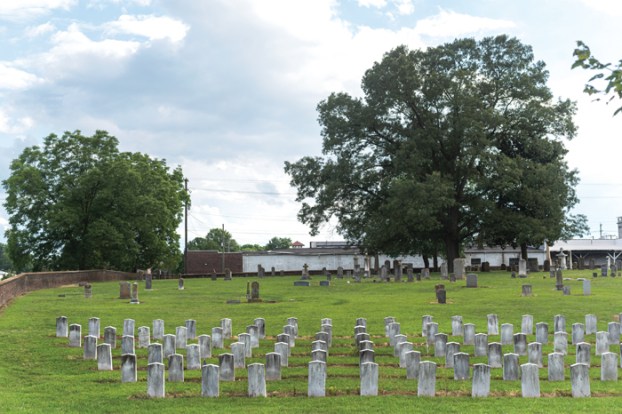 SALISBURY — The city’s Public Works Department has hired contractors to begin the process of relocating the “Fame” Confederate statue, but the city is awaiting the “go-ahead” from the United Daughters of the Confederacy as they consider different locations.

Mayor Karen Alexander said the UDC, who owns the statue, is determining where exactly at the historic cemetery on Lee Street the statue will sit. The specific site outlined in the agreement is within the eastern portion of the cemetery, which is bound by existing grave markers, brick and stone along East Franklin Street and the North Carolina Railroad as well as an opening in the stone wall along East Franklin Street.

She added that a preliminary site was marked so the UDC could have an idea of how it would look. She expects to hear from the UDC about moving forward within a week.

The next step for the UDC is to submit an application to Historic Preservation Commission to obtain a certificate of appropriateness. The application will also include fencing and paving plans.

The application could then be placed on the agenda for the next scheduled Historic Preservation Commission meeting, which is scheduled for Aug. 13.

Craig Powers, director of Salisbury Public Works, said contractors have been hired to survey and map the land. There will also been a subsoil investigation to ensure it will support a foundation for “Fame.”

Once the plan is signed off on and consistent with the previously approved agreement, the city will begin building the foundation, move the statue and build the amenities.

The proposed site amenities include an 8-foot-high wrought iron fence erected around the monument as well as security cameras to ensure the statue is preserved and protected.

At least $65,000 has been raised to add the amenities to the new location by descendants of the original UDC members who dedicated the monument and local historic groups. The Historic Salisbury Foundation has agreed to serve as the fiduciary agent to oversee those funds. Ed Norvell, one of the descendants of the original daughters who erected the statue in 1909, played a key role in gathering the funds to cover the proposed site amenities. The goal is to have some money in reserves for future repairs or maintenance, if needed.

Powers said the city is doing everything it can to facilitate the move and ensure it’s completed successfully. For now, it sits in storage at an undisclosed location.