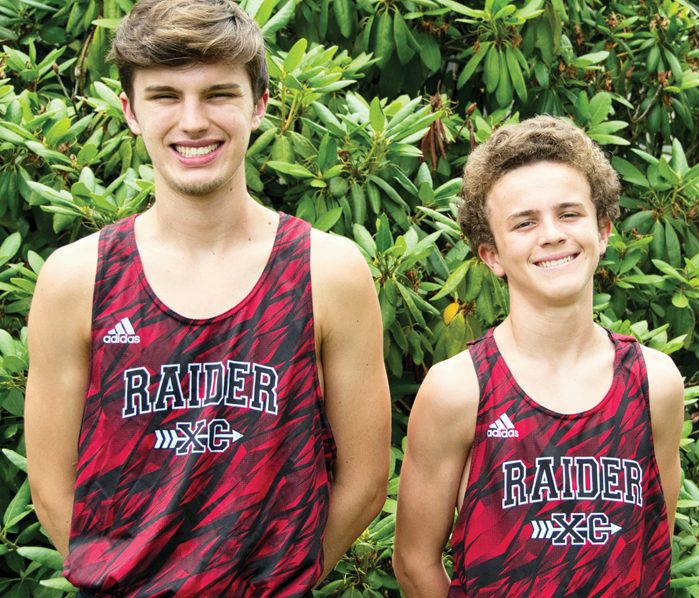 Noah Julian is the reigning Rowan Country high school runner of the year. This fall, as a senior, he welcomes his brother, freshman Eli, to the South Rowan team. Noah knows that Eli can really run and is catching up in stature.

Noah, 6 feet and 140 pounds, said, “Eli and I are usually very competitive in pretty much everything, including backyard basketball, video games or just being right when asked a question. I have started to pull away in races more than when we were younger so I am not worried about him as much. It’s exciting to be on the same team this year with high expectations throughout. My motivation comes from beating a county rival or conference competitor/teams and just getting my times lower to get a college scholarship.”

Younger brother Eli, at 5 ft. 4 inches and 100 pounds, said, “I am a very competitive runner, and excited to be able to run with Noah this year. But most of my motivation will come from the competition on the other teams. Noah’s times will be lower than mine this year so I will just be trying keep him in my sights.”

Both boys’ training currently consists of building distance miles and strength exercises. They will start more speed training as the fall season gets closer. Other interests include swimming, video games, watching TV and staying on top of current events.

Noah said, “I’m very excited about our team now, with three seniors, two sophomores and four freshmen, one being Eli. We just need everybody to stay healthy.”

South’s boys are coached by Scott Julian, Noah and Eli’s dad. Their mom, Rebekah, heads the girls’ team. Both parents know their stuff. Noah said, “Being coached by my parents has its pros and cons. The pros are that I am very close to the coaches and they sometimes will ask my opinion on workouts. They also stay after me about working hard and not slacking off when it comes to my strength work. The main con is they push me more if I have a bad workout or race when we get home away from the team. They expect a lot from me as a team leader and their oldest son who they want to see succeed. I love them both a lot though, aware they know what is best for me and they have made me the runner I am today.”

Eli added, “Being coached by my parents is pretty much normal for me. They coached me through middle school cross country because China Grove does not have a cross country team. They would give me the workouts, and then I would go do them on my own. It isn’t much different now because they still expect just as much out of me as they did before.”

Both boys have big running goals, with Noah more specific since he’s about to embark on choosing colleges. He said, “My goal after high school is to get a 4-year degree at a college where I can get a scholarship for running and a degree in aeronautical engineering or cyber security. I have looked into colleges like the Naval Academy, Clemson, USF, Lehigh, Virginia Tech, N.C. State and UNCC. I want to see how my cross country season plays out and then analyze my college pathway options closer, especially after losing my junior track season to the virus.”

Eli said, “I definitely hope to get a running scholarship to a school that interests me in some way. I don’t yet know what field I want, but I’ll know by my senior year.”

While those decisions are in the future, one thing that they do daily is run and run well. Both are great kids and part of Rowan’s premier running family. I suspect that they will end up pushing each other hard to even better results. It will be fun, just as high school cross country always is.

Currently, Salisbury’s Greenway 5K has rescheduled for Aug. 15. Check www.salisburyrowanrunners.org for the most current calendar and information.

What exactly is rBST on dairy labels?