Baseball: Klingler can hit, but he’ll sink his teeth into education 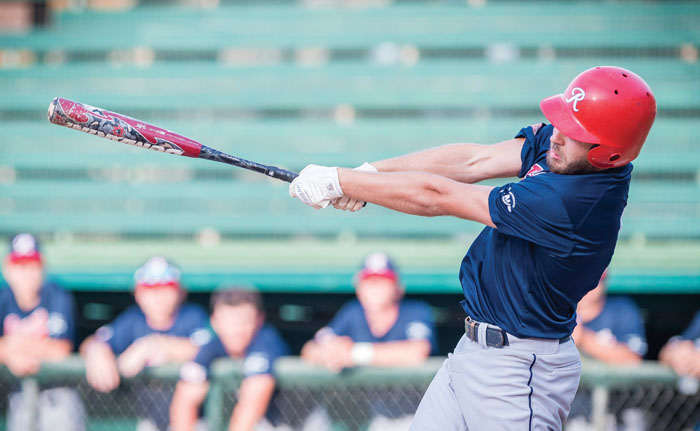 “Since elementary school, I’ve enjoyed going to the dentist, and I’ve always just enjoyed talking to him about things,” Klingler said. “That was a big part of me deciding that dentistry is what I’d like to do as a career.”

As good as he is at the sport, Klingler’s college choice was dictated more by his career aspirations than the athletic side of things.

High Point University has a pre-dental program that is considered among the nation’s best. A high percentage of HPU students move on to dental school, and it’s only 40 miles from Salisbury.

So High Point will be Klingler’s next destination.

He hasn’t been guaranteed anything as far as baseball with the Panthers,who compete in Division I,  but he does plan to try out for the team as a walk-on. He plays a position (catcher) that is the hardest to fill, and a lefty-hitting catcher is almost a priceless commodity. His chances of earning a spot on the team seem pretty good.

“High Point’s coaches have been to see me play and they know I’m coming there,” Klingler said.

Klingler certainly has the bat and skills to be a scholarship player at the Division II level, but while he got some looks, he never got any offers. Those offers more than likely would’ve materialized during his senior season, but then that season was cut short by COVID-19. With college seniors being granted another year of eligibility, that also sliced into the opportunities for high school graduates in the Class of 2020.

“A lot of schools said they were coming to see me this spring or schools wanted to come see me play one more time, but then our season was over, just like that,” Klingler said. “It was terrible. A lot of people are saying now that they wanted to play us, but, honestly, no one wanted to play us. (East Carolina commit) Jake Hunter is throwing 91-92 right now. We had an unbelievable pitching staff. We were loaded. We had a shot at state.”

Klinglery was batting 11-for-20 (.550) when East’s season was suddenly interrupted. While he’s not going to launch a lot of balls out of the park, he already had three doubles and six RBIs and had scored nine runs.

“Ideal lead-off hitter,” East coach Brett Hatley said. “Charlie is outstanding at getting the bat on the ball and using all fields. He’s a good runner and a very good catcher.”

Physically, Klinger (6-1, 170) looks more like an outfielder than a catcher, but catching became his primary position years ago.

“I wanted to play shortstop, but we already had one,” Klingler said. “Someone has to catch, and that turned out to be me. I said I’d try it. Then I just kind of got stuck behind the plate.”

He grew to love catching, learned to enjoy controlling the pace of the game and helping his batterymate get hitters out. His footwork improved. He embraced the bruising art of blocking pitches.

“Nothing happens without the catcher,” Klingler said. “You’ve got everything in front of you. You get to watch the whole game unfold.”

Klingler played shortstop for the jayvee team as an East freshman. He pounded baseballs and hit almost .400.

When he was promoted to the varsity as a sophomore, East had Trevor Scruggs catching, so coach Brian Hightower, who was piloting East’s program then, put Klingler in the outfield. It was a good move to get his bat in the lineup. He hit .375.

“As far as being able to hit, some of it is probably natural, but it’s ability combined with a lot of work,” Klinglery said. “I had great coaches who pushed me at East to work hard in the fall and winter. I feel like I’ve come a long way. I’ve gotten stronger and faster every offseason, and (teammate) Wayne Mize and I have hit constantly in the cages.”

Klingler slumped a little to .298 as a junior. He hit line drives right at people.

In the summers of 2018 and 2019, he played with the South Charlotte Panthers, the area’s elite showcase team. He participated in major tournaments.

“No regrets about playing with the Panthers,” Klingler said. “I met a lot of people and saw a lot of places. I got some exposure.”

But he’s had fans and friends bugging him about playing for Rowan County at Newman Park for a while. He enjoyed his time with East Rowan Junior Legion a while back and he decided to join teammates Mize and Mattox Henderson and former teammate Bryson Wagner on the Rowan NC3 club.

He is enjoying the chance to call pitches for the Rowan NC3 team.

He’ll be sharing catching responsibilities with West Rowan rising senior JT Fecteau, but Klingler has such a lethal bat that he’ll probably be in the lead-off spot on the lineup card as the designated hitter even when he’s not catching.

And while Rowan is in good shape as far as outfielders, Klingler can do the job out there if needed. That’s another option to get his bat in the lineup.  He’s had four hits in Rowan’s first two games.

“I like leading off, getting it all started,” Klingler said. “Like the game on Tuesday, our first three guys went up there and got hits. We got three quick runs to get on top.”

Klingler is aggressive for a lead-off man and prefers to rip the first strike he sees, rather than working a deep count.

“He can hit — he can really hit,” Rowan NC3 head coach Jim Gantt said. “As a catcher, he doesn’t have the strongest arm, but he makes up for it with a very quick release. He’s also got an upbeat personality. He’s a fun guy to have on the team.”

Klingler didn’t have a ton of fun on Wednesday. He works with a roofing crew. That’s a pleasant job in the spring and fall months, but in the summer, it’s hot, grueling toil.

It’s labor that teaches good lessons. It’s sweat that provides incentive for Klingler to earn a college degree and go on to dental school.

Maybe one day he’ll be Dr. Klingler, inspiring a young ballplayer to follow in his footsteps.