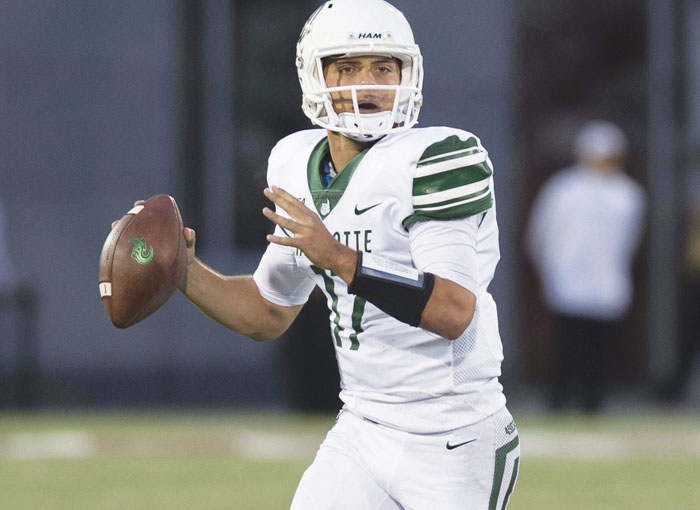 CHARLOTTE —  Chris Reynolds, the starting quarterback for the Charlotte 49ers, accounted for 3,355 passing and rushing yards and 28 touchdowns in 2019, but he hasn’t forgotten what it was like to be un-recruited even after an ungodly high school career at Davie.

He hasn’t forgotten going to Charlotte practices as a walk-on, the No. 5 quarterback, and not getting a single rep.

He hasn’t forgotten the devastating ankle injury in 2018 that forced him to start from scratch and prove himself all over again.

He hasn’t forgotten how many transfers were brought in to replace him.

Now a junior, Reynolds is the unquestioned offensive catalyst of the 49ers, who are coming off their first winning season (7-6) and their first bowl experience. But when you’re 5-foot-10 and you’re playing the position Reynolds plays and playing against the caliber of athletes he’s playing against, you never take a single step of the journey for granted.

“The chip on the shoulder never leaves,” Reynolds said. “The chip can’t leave. There are times when I reflect on the athletic road I’ve traveled, the challenges I’ve faced, all the adversity that put me on the path that I’m on now. I have gone from walk-on to starter, and I’m very grateful to be in the position that I’m in today, but my mindset is that I still have to earn a job every single day. I still have to compete every day like it’s my last day.”

Reynolds threw his first varsity touchdown pass for the Davie War Eagles against West Rowan in the 2014 season. He was the sophomore backup. He had two passing touchdowns, three rushing touchdowns and a receiving TD that season.

In 2016, as a senior, he threw for 2,514 yards and 29 touchdowns and rushed for 355 yards and 10 TDs. In a memorable 45-42 shootout against North Davidson and QB Joe Butts, who now plays baseball for Catawba, Reynolds threw for 413 yards and five touchdowns for the winners.

Reynolds passed for 5,636 yards and 59 touchdowns in high school against a sturdy schedule. Davie played mostly against 4A schools and Reynolds operated against stout programs such as Dudley, Scotland and A.L. Brown in the playoffs. Davie was 12-2 Reynolds’ senior year and he competed in the Shrine Bowl and the East-West All-Star Game, but there was no recruiting battle. Not even a recruiting skirmish.

The only number that seemed to matter was Reynolds’ height — 5-foot-10.

“It was always a matter of a couple of inches,” Reynolds said.

A smattering of Division III schools were interested in Reynolds. D-II schools yawned. When Charlotte offered him a spot on the team as a preferred walk-on, Reynolds wasn’t insulted. He jumped at the opportunity to be part of a D-I program. Charlotte was only in its fifth season of football when Reynolds came on board.

Getting on the field was still a world away, a seemingly impossible dream in the fall of 2017.  There were practice days when all Reynolds did was stand, listen and observe, but he always showed up.

His role became scout team QB, running the plays of that week’s opponent in practice, but he embraced that bit part and was scout team MVP.  They started calling him “Houdini” for his elusiveness, his magical escapes from pass-rushers during that redshirt year.

Charlotte was awful in 2017, 1-11 and one of the bottom-feeder programs in D-I, the absolute worst in the country at converting on third downs, so the 49ers made staff changes and were ready to think outside the box. When spring ball arrived in 2018, Reynolds was the No. 5 QB, but after two weeks, he was No. 3. Two more weeks and he was No. 1. Maybe he didn’t look the part, but he was making better decisions than anyone else and Charlotte had taken a beating with guys who looked the part. The 49ers had nothing to lose.

Now Reynolds was on scholarship, but he kept the chip on his shoulder.

In the fall of 2018, Charlotte had fierce competition for the QB spot. Doubters waited patiently for him to fail, but Reynolds stayed No. 1. He held off the returning starter, the returning backup, a Miami transfer and a touted freshman.

“I was given an opportunity, and I stayed positive,” Reynolds said.

He was a Cinderella story as a redshirt freshman starting QB when the 2018 season opened, the 5-10 guy, the former walk-on, the longshot, but he stayed focused on the field. Charlotte was better with Reynolds. He was completing 65 percent of his passes for 1,173 yards and six TD passes (with only two interceptions) and the 49ers were well on their way to a 3-3 record when Reynolds was injured in Charlotte’s sixth game against Western Kentucky on Oct. 13.

It was a brutal injury to his right ankle. It was worse than a break. He shredded the ankle, tearing ligaments and tendons. His 2018 season was over.

Surgery followed. Doctors told him he had a six-month recovery period in front of him, but he turned it into a four-month process with relentless energy. It started with basic range of motion exercises. Then he was walking around the training room. Gradually, he moved up to the Stairmaster and treadmill. Then he was jogging. Finally, he was making cuts. He made it back for spring drills in 2019.

“My mindset was to get back not to where I had been, but to be better,” Reynolds said. “But it was a tough injury. It set me back. It was an unbelievable relief when I got into my first live action and found out I could still do what I needed to do.”

There was more competition for Reynolds’ job in the fall of 2019, including South Florida transfer Brett Kean. Kean actually started Charlotte’s 2019 opener for new head coach Will Healy, but Keen didn’t move the team on the first two possessions against Gardner-Webb. Reynolds relieved him. Charlotte scored on four straight possessions. Reynolds was the guy after that.

Reynolds started and threw for 296 yards and four TDs against Appalachian State in a 56-41 loss on Sept. 7.

A promising 2-1 start for Charlotte had tumbled to 2-5 by the time the 49ers hosted North Texas in late October. That’s when a lot of things changed for Reynolds and possibly for the program.  Dodging tacklers while scrambling to his right late in that game, Reynolds never stopped looking downfield.  Then he appeared to be sprinting, leaping and throwing all at the same time. Victor Tucker secured his 34-yard pass in the end zone with 18 seconds left, and the 49ers pulled out a 39-38 victory. Reynolds threw for 336 yards and three touchdowns in that outing with no interceptions. He also ran for 96 yards and a TD.

Reynolds isn’t loud, but the best kind of leadership is often by example. When Charlotte desperately needed a play, he made it.

“North Texas was the game where the season turned,” Reynolds said. “Big difference between 3-5 and 2-6. We all started playing better.”

On Nov. 9, at UTEP, Reynolds turned in his best statistical outing, breaking the school record for total offense in a game, with 354 passing yards and 91 rushing yards. More important, Charlotte had a three-game winning streak.

Then Reynolds rushed for 145 yards in a victory over Marshall as Charlotte became bowl eligible for the first time.

When Reynolds turned in another efficient game at Old Dominion, Charlotte owned a five-game winning streak and a 7-5 record. The resilience shown by the 49ers was stunning. They took their cue from their quarterback.

“When we were invited to a bowl for the first time, our fans went crazy,” Reynolds said. “I don’t think I realized how much impact we have on a lot of people beyond the program. A lot of people care about Charlotte football.”

Charlotte lost the postseason game to Buffalo, but the team got to travel to the Makers Wanted Bahamas Bowl, which is a nice place to be in December, and Charlotte fans showed avid support. Reynolds played reasonably well in the loss — 15-for-24 passing for 198 yards and a TD — but it left him wanting a lot more.

He’ll have a new offensive coordinator in 2020 — Mark Carney — although that’s not a massive change for Reynolds. Carney was the quarterbacks coach a year ago.

“We’ve got a strong relationship,” Reynolds said. “He’s a guy I can sit down and talk to for two hours about ball or about life.”

The offseason has been unique, with the coronavirus shutdown creating unexpected challenges.

“I just made up my mind that the best thing for me to do was to do even more than I’d normally do every day,” Reynolds said. “Watch more film. Train more. I found ways to compete in the off-season, found receivers to throw to. I found ways to improve. We had to be creative to get our work in, but I’m back in Charlotte now and more of the guys are starting to come back now.”

As the program’s quarterback and one of the natural leaders, the protests and unrest that followed the police custody death of George Floyd in Minneapolis, have increased Reynolds’ responsibility in a difficult time. Reynolds supports his black teammates, but he also knows there aren’t any quick fixes or easy answers.

While Reynolds will enter a season as the clear-cut starter for the first time, it won’t be any problem finding motivation. There are reasons to maintain the chip on the shoulder. Charlotte is predicted to be a middle-of-the-pack squad in Conference USA East, even with Reynolds triggering a potentially lethal offense.

“I’ll find things to drive me,” said Reynolds, who was Honorable Mention All-Conference USA in 2019. “We want to win more than seven games. We want to win a conference championship.”

Charlotte is one of many schools that has offered a scholarship to Davie’s 6-foot-6 rising senior QB Nate Hampton.

“It’s not like I call Nate and try to get him to come to Charlotte,” Chris said. “But I have talked to him about what it’s like to go to school here and play football here.”

“Jack might have to go the same route I did,” his proud brother said. “But we’ve got a lot of athletes in our family, and he’s the most athletic of all of us. He never stops working to get better. There’s a lot of fight in Jack, and I mean that in the best way.”

There’s a 5-10 quarterback in Charlotte who’s proof of that. He holds a couple of school records.