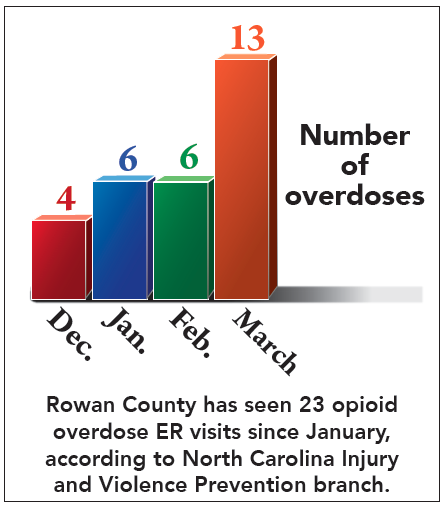 SALISBURY — Health officials worry social isolation may be causing more people to overdose as a result of the increased stress, anxiety and cut-off from recovery resources.

“We still have a lot of work to do with addiction and drug abuse,” said Rowan County Public Health Director Nina Oliver. “It’s not just a public health problem. It’s a community problem.”

Oliver has dedicated all her time to leading the county’s COVID-19 response. But in addition to the COVID-19 pandemic, another epidemic remains with drug overdose and opioid use. It’s an issue that never goes away, she said. Especially during the pandemic, the issue “gets swept under the rug so it doesn’t seem like an issue.”

Rowan County has seen 23 opioid overdose emergency room visits since January, according to North Carolina Injury and Violence Prevention branch. The number of overdoses increased from six in February to 13 in March, when business shutdowns and COVID-19-associated layoffs started. That’s compared to six in January and four in December.

More than 20% of those who overdosed in the county in March were between the ages of 25-34. Additionally, another nearly 20% of the overdoses were from individuals aged 35-44. Between 80-90% of the emergency room overdose visits were among white individuals.

Oliver is among other health officials who are concerned the social isolation and financial impact of the pandemic will not only result in addicts relapsing, but also a development of addiction in more people who may not had used drugs previously to cope.

Oliver, as well as Natalie Arrington, who serves as the harm reduction advocate for the county’s Post Overdose Response Team, established in July 2019, see a connection with the added stress of the pandemic and the increased number of overdoses in March. Oliver expects those numbers will be similar, if not higher, for April.

“The numbers tell me that people are hurting, and people need help,” Oliver said.

Arrington said high stress and high anxiety can lead to people choosing to self-medicate themselves in order to cope. And as the pandemic has resulted in increased uncertainty, anxiety and stress for the working class in particular, drug use may serve as a coping mechanism for those who are concerned for their wellbeing and income, she said.

Additionally, Arrington said that while the stimulus checks the federal government issued to citizens is helpful and needed, it can also provide extra money for people to seek coping strategies they may not have once used otherwise.

“As stress goes up, use goes up,” said Ashley Creek, another member of the Post Overdose Response Team.

Creek, 34, is a former addict herself. She now serves as the point-of-contact for individuals who overdose. She said communication is established within 24-72 hours after an overdose.

Creek grew up in Chattanooga, Tennessee, and attributes poverty, trauma, abuse and neglect as contributing factors to her former addiction to alcohol, meth and heroin. It became a coping skill. She wasn’t taught any other healthy ways to cope.

She sought help in rehab at the age of 31. It was there she learned how to heal from her trauma and how mental issues can affect her decision-making skills. Her realizations in rehab inspired her to serve the community as a “helper.”

Creek added that more overdoses are at risk because many people are out of work with idle time on their hands. Meanwhile, they are cut off from recovery resources and mental health services.

The Post Overdose Response Team looks to continue providing resources, with initiatives that include mobile Narcan — the drug used to reverse an overdose — stations in the county’s “hot spots” and Zoom support groups for participants at least twice a month to eliminate any potential transportation barriers.

Oliver said the county currently does not have a detox clinic, which requires patients to leave the county for services. She said targeting the issue of transportation is an initiative she continues to work on.

“We’re creating more of a social impact in that we’re helping not only the people in addiction, but also the people outside looking in,” Arrington said.

Another initiative involves a syringe exchange program in which Rowan County currently works with Cabarrus Health Alliance. Oliver said more than 50% of the clients served in the Cabarrus program are Rowan County residents.

Oliver said addicts are five times more likely to seek help after using the syringe exchange program. She added that while each sterile syringe costs just 7 cents, taking care of an addict who contracted HIV from sharing used needles can result in a lifetime cost of up to $618,000. It can cost up to $500,000 to care for Hepatitis-C patients.

Creek said she aims to continue lifting the stigma and shame associated with drug addiciton.

“I want people to know that there is a person behind that addiction,” Creek said. “There is a human being that’s worth saving.”