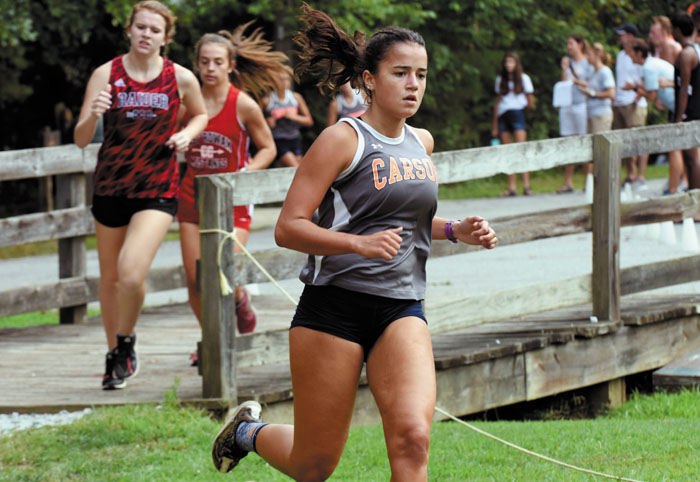 Taylor Conrad (Carson) in the race in the Cross Country.Pre County on Aug. 20, 2019. photo by Wayne Hinshaw, for the Salisbury Post

SALISBURY — Carson cross country and track and field coach Les-lee Ihme has a practice of assigning spirit animals to her athletes.

Taylor Conrad has been known as the “Bumblebee” for years because she’s one of the busier people in the history of the school system, flitting from one activity to the next.

The “Bumblebee” is the first female winner of the JT Bost Sportsmanship Award, a countywide honor.

The concept of sportsmanship can’t be quantified by stats or numbers, but it involves competing with fairness, ethics, respect and a sense of fellowship with teammates and competitors. Conrad checks all the sportsmanship boxes.

Besides competing in four sports (she was on championship teams in three of them) and participating in every club imaginable, Conrad has worn the sash and crown of the homecoming queen. She’s also worn the burden of being student body president in the year of the coronavirus.

More work for the “Bumblebee,” but she embraced the challenge as an opportunity.

Conrad is a very good athlete. The “Bumblebee” could sting, at times, as well as stay busy.

She was the county’s co-runner of the year cross country, along with East Rowan’s Adalie Harrison. She was one of the county’s top runners for four years and led Carson to team county and conference championships.

“I played with great athletes (at West Rowan) and I’ve coached great ones, but Taylor is the most selfless athlete I’ve known,” Ihme said. “She is unlike any other. She has morals. She works hard. She is honest. She’s kind. She feels for others. She embraces her role and will go to extraordinary lengths to make herself and her team better.”

Cross country mileage was the last thing on Conrad’s mind when she arrived at Carson after standing out in soccer and basketball at Southeast Middle School.

“I remember Coach Ihme came to talk to us one day about running in high school,” Conrad said. “I’d run a few 5Ks, but I’d never taken running seriously. But I decided I would run at Carson. It would be a good way to stay in shape for soccer and basketball.”

When she finished second in her first Rowan County meet, she was hooked. She would never win the county meet, but she was runner-up three times.

“I wound up loving cross country,” Conrad said. “It became my favorite sport.”

She had her moments in three varsity seasons for coach Brooke Stouder’s highly successful basketball program. Her defining moments on the court came in her junior year when Carson played Salisbury in the championship game of the Dale’s Sporting Goods Sam Moir Christmas Classic. Everyone started that game nervous — except Conrad. Her barrage of early 3-pointers got the Cougars started toward a title.

Carson was runner-up in that tournament her senior year. Conrad received the RONZ Award, given in honor of long-time Post sports editor Ronnie Gallagher, who passed away in 2013. The RONZ award is a character award and recognizes many of the same virtues as the Bost Award.

“Taylor is extremely special,” Stouder said. “Seriously, one of a kind. She’s the best leader I ever coached.”

Conrad made a transition for Carson basketball from scorer to rebounder/defender. The Cougars had scorers, so she did what was needed most for an undersized squad.  She’s 5-foot-6, but it wasn’t unusual for her to take two charges and get a half-dozen rebounds.

“I still scored well in some games, but I realized I wasn’t a scorer,” Conrad said. “So I made up my mind to work as hard as I could every day in all the other areas. I tried to bring 100 percent effort, not just to the games, but to the practices.”

“Taylor is extremely deserving of the Bost Sportsmanship Award,” West said. “She was one of the kindest and hardest-working players I’ve ever coached. She gave 110 percent in every game that she played and was always willing to sacrifice herself in any way possible to help her team. She took winning and losing personally — showing emotion in both outcomes. She is also one of the nicest players to ever grace the field. She was always the first person to check on or assist a fallen player on either team. No matter the outcome or circumstances, I could always count on Taylor to represent our team with dignity. She was a role model for players of all ages.”

Losing almost all of her senior soccer season was painful for Conrad. Her sister, Lindsey, who is one year younger, is also a fine athlete and is one of the county’s top tennis players.  The only sport both Conrads played together is soccer. They were tireless defenders, usually frustrating opponents side-by-side.

“Soccer is the sport I played my whole life, so I really missed not having that senior season,” Conrad said. “It was my last chance to play with Lindsey.”

Conrad would also have made guest appearances for Carson track and field for the conference and county meets if they had taken place. Ihme was counting on her in the 4×800. There’s no doubt she would have come through one more time.

For all her athletic success, Conrad can make fun of herself. She’s spent some time on crutches recently, the result of spraining an ankle while working out to a video.

“I stepped back and hurt my ankle,” Conrad said. “I’ve been running a lot while we’ve been in quarantine, but that was a pretty clumsy workout.”

Conrad will be leaving athletics behind in the fall, except for intramurals. She’s headed to the University of North Carolina, where she hopes a degree in political science or history will lead to law school.

She’s accepted more than her share awards, but she’s excited about the Bost Award because she’s first winner and because she respects how strong the competition was. Her list of friends includes two cross country nominees, Madison McGuire (South Rowan) and Harrison (East Rowan).

The award is a boost for Conrad, who lost a grandmother, who meant a lot to her, last week.

Carolyn Conrad spent her working life as an elementary school teacher in Thomasville for 35 years. She made it to her granddaughters’ athletic events. She was one of the people responsible for making the “Bumblebee” the person that she is.

“My dad would push her wheelchair so she could be there at the finish line at the cross country races,” Conrad said.

Conrad sounds almost too good to be true, but she’s real, always upbeat, always on the move, ready for the next challenge.

“She’s that girl that everyone strives to be,” Ihme said. “She more than an amazing athlete — she’s an amazing human being.”