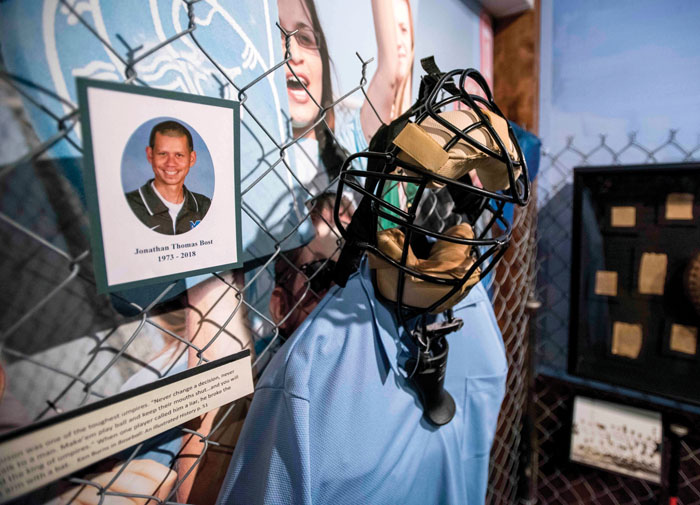 JON C. LAKEY / SALISBURY POST On June 13, 2018, a display at the Roller Mill in China Grove includes the umpire uniform of JT Bost who died in an automobile accident.

He was a high school and American Legion guy, mostly, but he’d umpired his first Division I college baseball game shortly before his death.

“I knew JT a long time,” former North Rowan head football coach Ben Hampton said. “The one thing I’ll never forget is the professionalism he had and the respect he had for the game he was calling, no matter what sport. I’ll never forget the respect that he gave to the players and coaches involved in that game. There are always a lot of emotions involved in athletic competition, but even when athletes and coaches let their emotions get the best of them, JT always kept a level head. He always called the game the way it should be called.”

There was a time when JT called the Post frequently, usually after 11 p.m. He would always the start the conversation with, “Sorry, I know it’s late.  I know you’re busy.”

He was usually right about that, but no one ever was busier than JT.

Whenever he called the Post, it was to make sure we had all the late Area III American Legion baseball scores from that night’s action. He wanted to make sure our standings matched his standings, the standings he would be emailing to dozens of coaches. No one kept up with the scores and the standings and the scheduled — or rescheduled — games quite like JT.

JT was also that guy who would send the Post the results of conference swim meets he’d administered. He realized there were kids out there (and their parents) who wanted to see the times and the finishes, the fruits of months of work, recognized in a newspaper.

JT was a frequent on-the-field and on-the-court presence at football, baseball and basketball games. A little guy, he was dwarfed by the players who surrounded him. But he was steady. He wasn’t intimidated, and he didn’t try to intimidate. He wasn’t one of those officials who felt compelled to let everyone know he was in charge.

At baseball games, checked swings and faked bunts would unfailingly bring a brisk, “No, he did not offer at the pitch!” from JT and smiles from the crowd.

Occasionally, he’d even turn up to administer a volleyball match.

Andrew Poston umpired for years with Bost and searched for a way for JT’s contributions to the games to be remembered.

“JT spent a large part of his life dedicated to upholding sportsmanship, and he was great at that,” Poston said. “He took that job seriously and I couldn’t imagine letting his legacy die, so I came up with these annual Rowan County Sportsmanship awards to honor him.”

The ADs at the six schools were asked to provide the male and female nominee from their school that best displayed the ideals of sportsmanship during the school years — ideals such as fairness, civility, honesty, respect and responsibility. Most, but not all, of the athletes were seniors. Some were among the best and best-known athletes in the county, athletes who managed to stay humble and respectful to others even when they were dominating their respective sports. There were others who aren’t well-known, but all 13 nominees (West Rowan had two equally deserving female nominees) were well above average on the field, in the pool or on the court.

“The outpouring of support from all corners of the county for these awards shows that sportsmanship, while it gets overlooked at times, is still the key piece of high school athletics,” Poston said. “These awards will be a way to remind people that sportsmanship is still recognized. Every coach will tell you the reason they coach is to help young people become better adults. It’s why I personally umpired 11 years. It’s why I now coach at South Stanly High. I know it’s why most officials stay in sports. I know it’s why JT did what he did.”

“We had 13 wonderful athletes nominated and a spirited committee discussion to determine winners,” Poston said. “All of the nominees epitomized what sportsmanship is all about. I know JT would be proud of this group of nominees. His mark on young athletes and his legacy will live on.”

High school: After a great run in Rowan, Nixon…