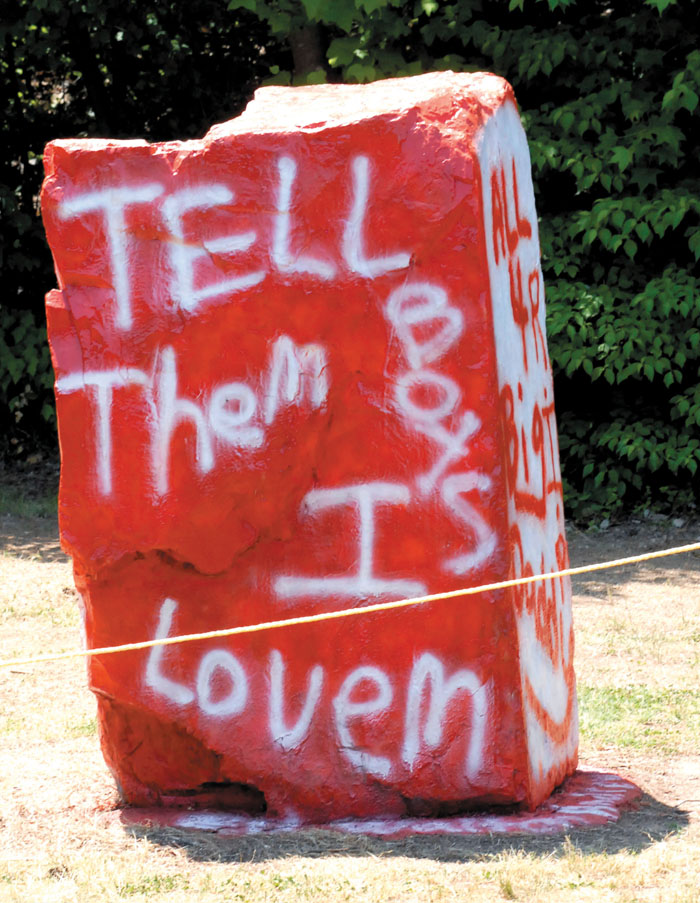 Ronnie Gallagher / Salisbury Post file photo This message on East Rowan’s stadium rock in May 2010 was from Jamie Ledbetter, a former coach who later died of pancreatic cancer. 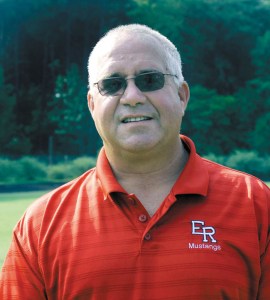 GRANITE QUARRY — In the mid-1970s, East Rowan was good in just about every sport.

The Mustang boys won the Rowan County Track and Field Championships in 1973, 1975 and 1976, but they wouldn’t take another county crown for three decades.

Salisbury took control of boys track in the late 1970s and maintained it for most of the 1980s. Then North Rowan coach Robert Steele built a colossal track and field empire that would claim 18 Rowan County titles in 19 years.

When Rick Roseman and Jamey Ledbetter started coaching track and field together in the spring of 2004, East Rowan, which had enjoyed some strong years in the 1990s, was at low tide. Roseman remembers East was down to eight athletes in 2003.

“East hadn’t won in several years,” Roseman said. “By that I mean not only had they not won a meet, they hadn’t finished ahead of anyone in a meet. But we had 25 kids come out our first year. We placed third in a four-team meet and they were ecstatic.”

Jump ahead to the spring of 2007. North Rowan finally was down a little. East had been building steadily. Roseman knew his team had a chance to break the drought.

“We’re talking to the team and I tell them that if we can win the county meet they’ll get medals, and everyone applauds,” Roseman recalled. “Then I tell them they’ll get patches, and everyone claps. Then Coach Ledbetter yells, ‘If we win the county meet, we’ll feed you all the steak and taters you can eat.’ ” That’s when everyone just went crazy. That’s when I figured out food was the master motivator.”

Coach Ledbetter was born James Murphy Ledbetter, but no one called him James. He was “Jamey” or “Big Daddy” or “Uncle Murph.” A 1977 East graduate, his throws had helped East claim that 1976 county title, the last one before the three-decade drought.

The record book shows East’s boys won the county meet in 2007. They actually won it handily, with Mike Brecht ruling the distance races and with depth across the board. East went 2-3-4 in the 800 and 1-3-5 in the pole vault. East had superior numbers. Math was on the side of the Mustangs.

Steak and taters would become a major part of Ledbetter’s legacy.

“North was so good for so long, that I was honestly shocked when we won in 2007,” Roseman said. “I remember walking with Coach (Barry) Justus after the meet and asking him who was going to be paying for all those steaks and taters.”

As it turned out, Roseman was paying. But he didn’t mind. That day in 2007 marked a turning point in the fortunes of East Rowan track.

Steak and taters after county titles became a proud tradition in Granite Quarry. The Mustangs chowed down after they defended their county title in 2008. They feasted like kings again after they three-peated in 2009.

But that spring of 2009 brought sobering news.

“Jamey had found out the day before that he had pancreatic cancer,” Roseman said. “He let me know when we were on the road to Mooresville, and both of us cried all the way.”

When they got to the track, Ledbetter asked Roseman not to say anything to the team, that they would coach the same as they always did. This meet was big for the boys. He didn’t want them worrying about coaches.

Pancreatic cancer has a mortality rate of 80 percent within a year. Ledbetter fought it as hard as anyone can, but he was fading by the spring of 2010.

Ledbetter did get to see his son get married on April 24.

The Mustangs won their fourth straight county track and field championship. On May 6, Roseman, Justus and several athletes took the trophy to the hospital so that “Big Daddy” could see it and touch it. He smiled through the pain. His boys had earned another round of steak and taters.

Ledbetter didn’t get to make the trip to see his daughter graduate from East Carolina. That was on May 8, but he called her and told her how proud he was. Roseman was at his bedside and heard that conversation. It’s stayed with him.

On May 9, Ledbetter, surrounded by his family and pastor, passed away peacefully at 51. He died on Mother’s Day, a year to the day since his tearful ride with Roseman.

The funeral was held on the 12th.

The 3A Midwest Regional was scheduled for the 15th. Since its track revival in 2007, East had been notching championships at the county and conference level, but a regional title seemed like an impossible quest. And now the Mustangs, who were hosting the event, were burdened with heavy hearts.

“I’d been coaching athletics a long time and I had no idea how our guys would respond,” Roseman said. “Honestly, no idea. We were the ones who had to focus and get the course set up. I still have no idea how we managed to get through it all. We just ran on adrenaline.”

The battle for the regional title would become a struggle between an A.L. Brown squad with elite athletes — thrower Tavis Bailey, hurdler Jerrod Lipscomb and sprinter/jumper Damien Washington, who was headed to UNC for football — against an East squad that was scratching and clawing for fifths and sixths.

Bailey, the state’s most powerful thrower, would later compete for Tennessee and would make epic throws with Team USA on his chest.

“When Tavis threw the discus, we’d have to stop the girls long jump and triple jump competition,” Roseman said. “We were afraid someone was going to get hurt.”

East would get points in the regional from 16 different athletes. Ben Hancock would take second in the 400. Evan Webb and Dillon Arey would go 1-2 in the pole vault. Nathan Robbins and Sam Sherman would place 2-3 behind Bailey in the shot put.

“We had a bunch of blue-collar kids and they battled for every single point they had in them,” Roseman said. “I remember Andrew May finishing sixth (for one point) in the 110 hurdles, and he wasn’t supposed to finish sixth. All day long, kids came through like that for us.”

East stayed in the hunt, but heading to the concluding event — the 4×400 — the Mustangs still needed a miracle. That East relay team — Hunter Arey, Evan Hiatt, Hancock and Joseph Furtado — was seeded seventh.

“When I went to talk to the four guys at the tent before they ran, they asked me where they needed to finish for us to win,” Roseman said. “I didn’t have the heart to tell them. I told them just to do their best. But then they demanded to know where they needed to finish. I told them they had to get second for us to have any chance. They all said they’d finish second. They said they were going to do it.”

Arey kept the Mustangs in the race. Hiatt moved them up to the middle. Hancock could run close to a 50-second 400, and he bolted to the front by the time he handed the baton to Furtado. Furtado, had placed sixth in the individual 400 and was the anchorman for a reason. He couldn’t hold off Marvin Ridge, but he did stave off Northwest Cabarrus for second place. When a straining, completely spent Furtado collapsed across the finish line, East’s relay team had run two seconds faster than it had ever gone before.

A.L. Brown got a single point in that relay for sixth (after a DQ), and the Wonders and Mustangs ended up tied and were declared regional co-champs.

Roseman was fine with that.

When the scores were announced, tears flowed freely from East coaches and athletes who had gathered at midfield. One more championship for “Big Daddy.”

“Definitely the most emotional day of my long coaching career,” Roseman said. “It was as if the wind was blowing at our backs.”

Roseman tells the story of “Big Daddy” to a new East track and field team each year, as well as the story of Cody Ludwick, a courageous soccer and track athlete East lost to heart issues just 10 months after Ledbetter passed. It’s East tradition to compete with just two long jumpers in the county meet, holding the third spot open for Ludwick.

The mighty rock at the end of East’s track still carries the painted message: “All for Cody and Big Daddy.”

Roseman said East’s recent track success has been built on three simple rules —what he calls “Cody and Big Daddy Rules.” Bust your butt at all times, do whatever you have to do for the team, and never let your teammates down.

That 2010 Midwest Regional, that last 4×400, had to be seen to be believed. That was the peak of human effort.

The legacy of “Big Daddy” continues.

At East track banquets, the top male and female throwers receive the Jamey Ledbetter awards, while the Cody Ludwick Award is given to the male and female track athletes who displayed the most heart.

“As long as there’s track at East, they’ll be part of it,” Roseman said. “Their impact on our success has been huge.”