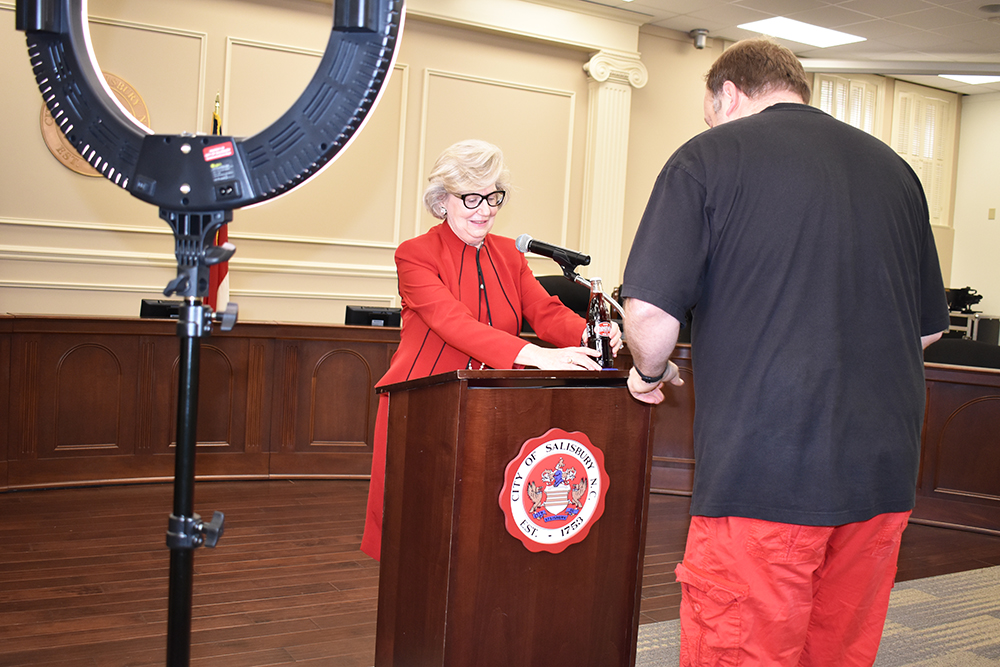 SALISBURY — Last year’s Cheerwine Festival brought a crowd estimated to be tens of thousands to downtown Salisbury, creating a sea of red, but this year’s festival will look different after organizers announced it would be a virtual festival.

Saturday’s festival will be shown live at 5 p.m. to 8 p.m. on Facebook, the soft drink’s website at cheerwinefest.com and possibly shown on the city’s TV channel, Access 16, and their YouTube channel at salisburync.gov/webcast. Linda McElroy, the city’s communications director, said the switch from a downtown festival to a virtual one has been a logistical a challenge knowing the organizers would have to rely heavily on technology.

The festival will begin with a proclamation read by Salisbury Mayor Karen Alexander, a welcome by the emcee and go into the variety of entertainment. Between performances, hosts will give shoutouts to sponsors. Vendors and downtown businesses will be featured.

Vivian Koontz, the city’s event coordinator, said Cheerwine will have bingo and trivia with an opportunity to win prize packs. Koontz said moving to the festival to online-only has made has required some innovation.

“I’m looking forward to the end result and really seeing how it pulls together,” she said. “We have the best team possible on this. I’m just really excited. We know what the street festival can be, and we’re in a situation that is completely out of our control. So we’re doing the best that we can.”

But McElroy and Koontz were tightlipped in an interview Friday about the festival’s headliner. Koontz said the band is the first question she gets from everyone, and it’s been hard to keep it a secret for months. McElroy said she thinks everyone will be pleased and she is personally looking forward to viewing the variety of bands on Saturday.

The entertainment will be announced Monday.

‘A lot of moving parts’

The organizers began looking at an alternative plan to the Cheerwine Festival when COVID-19 cases were popping up in the community in March.

Nick Aceves, parks and recreation director, said online only was their only option.

But planning for the festival starts more than year before. Performers are scheduled six months in advance with a deposit. Postponing the Cheerwine Festival to the fall was not an option, in part, because there was no guarantee that restrictions on crowd size would have been lifted.

One bright spot of a virtual festival, Aceves said, is that staff don’ have to stalk the weather for possible storms during the festival.

Throughout, the planning, city staff said, there has been a joint a conversation with Cheerwine. And they’re encouraging people to get a Cheerwine from the grocery store, tune into the festival and kick back or have some fun making Cheerwine-infused creations.

“We still are incorporating that Cheerwine brand into the festival and definitely encouraging people if they are having a backyard party with their family to turn on the festival and enjoy some Cheerwine,” McElroy said.

Koontz encouraged people to wear their shirts and hats while tuning in.

Cheerwine is selling its 2020 Festival T-shirt as a way to raise funds for Rowan County United Way’s COVID-19 Relief Fund. All profits from the sale of the shirts will go to the fund. The artwork is by Johnathan Marcus Woods, the grand prize winner of the inaugural Cheerwine Festival T-shirt design contest. Earlier this year, the family-owned soft drink company invited all of its fans to submit their original designs for consideration.

The premiere sponsors, Food Lion, F&M Bank and Hotwire, are still committed to the festival and its success, Koontz said.

McElroy said they are still hopeful the virtual event will have a positive economic impact — whether it’s from sales during the festival or visiting Salisbury later.

“We plan to showcase Salisbury and hopefully get those same folks who would have tried to come for the festival who don’t necessarily live here or Rowan County to try to visit Salisbury at some point,” she said.

Though people were disappointed about the change to a virtual festival, McElroy said people understood.

“Safety of our guests and visitors that come to Salisbury is our no. 1 priority, she said.

Next’s year’s festival is planned for May 15, 2021. Koontz said she hopes this will be the only virtual Cheerwine Festival.