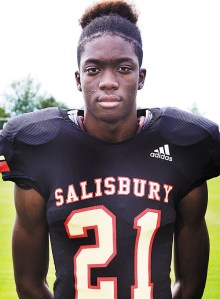 SALISBURY — Salisbury’s defense was so stout and had so many standouts that Kameon Alford, one of the unsung guys who rotated on the defensive line, didn’t get a lot of attention.

Alford may have flown under the radar, but he has a chance to be a productive player for Division III Averett University. He’s headed to the small school (enrollment: 1,000) in Danville, Va., to continue his education and football career.

Alford made his first contact with the school via email. In October, he was invited to visit the campus. He met coaches and toured the locker room and liked what he saw.

In January, he made a second trip that convinced him that Averett was the right place.

“The president of the college sat down and had a meal with the guys they were recruiting,” Alford said. “That impressed me that she supports the sports teams like that. Averett seems to be a really nice place, a wonderful school.”

Averett has constructed a reputation as a strong academic institution and as a school that’s gotten pretty good in football.  The Cougars, who compete in the USA South Conference, started playing football in 2000. They had many lean years, but they’ve been 6-4, 8-2 and 7-3 the past three seasons. Facility upgrades in 2014, including the installation of a turf field and lights, helped.

Averett has made a recruiting impact in Rowan County for quite a while. Rowan athletes have performed well in Danville over the years in baseball, football and volleyball. Averett is not that far away. It’s just north of the Virginia state line, less than 100 miles from Salisbury. Greensboro is the half-way point between Salisbury and Danville.

Alford will play for a brand new head coach, Patrick Henry, who was promoted in late March when the previous head coach Cleive Adams moved on to Ferrum. Henry served as the offensive coordinator for Averett last fall. He has experience on both sides of the ball, and a guy named Patrick Henry probably gives really strong motivational speeches.

When he visited the campus, Alford had a chance to talk to some of the local players who play for Averett, including West Rowan’s JaVon Lofton, who will be a senior in the fall, and North Rowan’s Jaleel Webster, who will be a junior.

Lofton, primarily an offensive lineman at West, was converted to the defensive line by Averett. He started half the games last fall, made three sacks and was in on 38 tackles. Webster was a factor on punt and kickoff returns and rushed for 96 yards on only five carries when Averett pummeled Greensboro College.

A.L. Brown’s Ka’seim Black, who is graduating and heading for a teaching career, not only started every game for Averett at cornerback in 2019, he posted a 3.83 GPA and made the academic all-district team.

Academic success is a priority for Alford, who plans to major in accounting. He also has an interest in psychology.

One of the intriguing things about Alford, who played on Salisbury’s basketball team, is that while he’s already 6-foot-4, he might still be growing. He’s definitely getting larger. He played defensive end for the Hornets at about 205 pounds in the fall, but he says he’s up to 228 now.

“He’s got long legs and long arms, and I know Averett really liked that length,” Salisbury head coach Brian Hinson said. “He’s long, lean and aggressive. I believe he could be a tight end or defensive end for them. There’s a lot of upside and growth potential there.”

Alford got started in football in the seventh grade at Knox Middle School.

As a sophomore he practiced some at tight end, but he was starting to see that his future was on defense.

He played jayvee for the Hornets two years. The last two years, he’s had his moments for the varsity, on special teams as well as at defensive end.

He had a fumble recovery in the big Central Carolina Conference win against Thomasville as a senior and played really when Salisbury stuffed Randleman in a 2AA regional final to get to the state championship. He made the final tackle of his high school career against Shelby in the title game.

“I think my best game as a senior was against East Davidson (in late October),” Alford said. “I was a team captain for that game and I made six tackles.”

As far as what he’s proudest, that was winning 13 games as a senior to tie the school record. Alford contributed to six defensive shutouts. The Hornets’ defense held six more teams to a single touchdown, and some of those came very late.

“We had some great leadership from guys like (linebacker) Jabril Norman,” Alford said. “He was always picking everyone up, even when they made a mistake. We also had coaches that got the most out of us. They worked us hard and gave us opportunities to make plays.”

Alford made enough of those opportunities that he’s getting a chance to play college football.