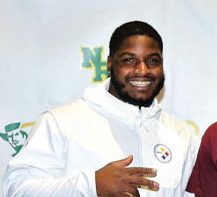 Javon Hargrave is in a contract year with the Eagles this year. Submitted file photo

SALISBURY — Considered a can’t-miss prospect when he signed in 2017, Virginia Tech defensive end Zion DeBose hasn’t made the on-field impact he expected to make or recruiting experts expected him to make.

Not yet, anyway. But it’s not like the fat lady has sung.

The latest setback for DeBose has been COVID-19. It cost DeBose — and everyone else — the opportunity to impress coaches during spring football.

DeBose, a North Rowan graduate, has been a major asset off the field  for the Hokies — in the classroom and in the community — and there’s still plenty of time to break out at Virginia Tech’s 65,632-seat Lane Stadium.

There was a standard redshirt year and also a medical redshirt year, so while DeBose is a junior in the classroom, on track to graduate in May of 2021, he’s barely played for the Hokies. He still has three years of football eligibility.

A chunky offensive lineman as a 12-year-old, DeBose blossomed into a long, lean, explosive man-child prior to his junior year at North Rowan. Camp MVP of a national-level combine in Georgia in the summer of 2015, he was a rising star. He made a verbal commitment to Appalachian State in the summer of 2016, but he de-committed and reopened recruiting a few months later when he started getting offers from Power 5 schools such as Missouri.

DeBose’s parents are Livingstone College graduates. His father, Lorenzo, came to Livingstone from Texas. His mother, Jill, is from Philadelphia. Both stressed grades from an early age, and DeBose was a National Honor Society student. That enhanced his appeal. Rated a three-star recruit, he was ranked as the 28th-best overall player in North Carolina’s Class of 2017 and the second-best defensive end.

Pittsburgh, Illinois and Missouri were in the running, but DeBose picked Virginia Tech. His signing came two days after National Signing Day because he wanted to make things official with the Hokies on his mother’s birthday. It was a major event held in the auditorium at North Rowan. NFL players Javon Hargrave (North Rowan) and Chris Smith (West Rowan) were on hand, adding their endorsements that DeBose would be the next big thing from Rowan County.

There was conjecture that DeBose, who weighed about 240 pounds, might be able to play at Virginia Tech immediately, at least to provide depth.

But a lot of student-athletes from small high schools are overwhelmed by the move up to a 30,000-student university. DeBose was no exception.

“You quickly go from being that high school star that everybody knows to being just another average fish in the sea,” DeBose said. “At this level, everyone is strong and everyone is fast. Physically, I wasn’t quite prepared for the speed of the game and the physicality of the game. As far as the mental part of the game, I definitely wasn’t ready. I had a lot to learn. I had adjustments to make.”

He redshirted the 2017 season, which means he practiced and worked out and went to meetings, but didn’t play. He has no regrets about that season. Going from hyped recruit to being part of the scout team was humbling, but it was the right decision.

“I was happy with the job I did my redshirt year,” DeBose said. “I put on 14 pounds of muscle while reducing my body fat by 10 percent. I got bigger, faster and stronger. I was playing quicker.”

In 2018, he got into games as a backup. He had a nice outing against William & Mary (five tackles) and a decent one against Notre Dame.

“They gave me some opportunities,” DeBose said. “But I was still a young kid at this level. I was thinking too much.”

DeBose made significant progress prior to the 2019 season, but then an injury wiped out a lot of hard work.

“I was in the running for a starting spot late in our camp, but that’s when I broke a foot,” DeBose said. “Then I tried to come back from the injury prematurely, and I lost the whole season. The one thing I’ve learned from all of this, is you have to be patient. I’ve learned patience. Not everyone at this level is going to be a four-year starter.”

Off the field, DeBose has hurdled obstacles far more easily. He’s handling his academic responsibilities now, like all college students, online. He had a 3.2 GPA last semester. He talks about a future in graduate school and a potential master’s degree in human development with enthusiasm.

In Blacksburg, Va., Hokie football players are the guys kids look up to.

DeBose has enjoyed that aspect of college football and has embraced it.

“The first day here, coaches let us know this was about more than football,” DeBose said. “Meeting kids, being accessible for photos and autograph sessions, that means a lot to kids. Football players have a big effect on the kids. Everything we do, those kids have got their eyes on us, so it’s important to be a good role model.”