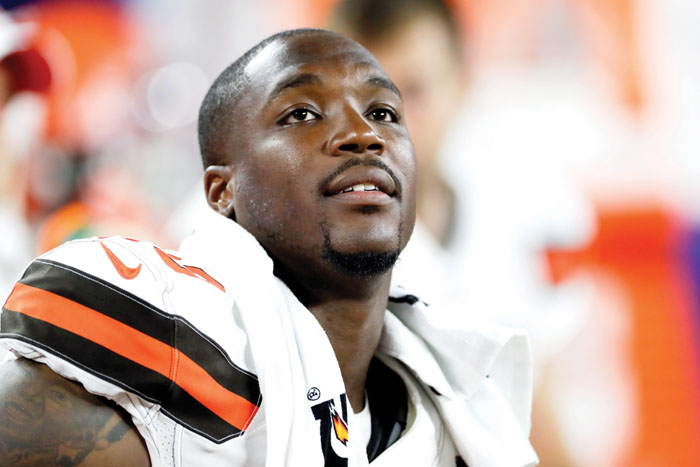 On Aug. 8, 2019, West Rowan graduate and Cleveland Browns defensive end Chris Smith sits on the sideline during the first half of a preseason game against the Washington Redskins in Cleveland. Smith has signed with the Carolina Panthers. Associated Press photo.

CHARLOTTE — Forever a people person, no matter what below-the-belt punches life throws at him, Chris Smith is getting ready for the 2020 NFL season.

He preparing to play in front of more family and friends than he’s seen in the stands since high school when he played for unstoppable West Rowan teams that performed their jobs with brutal efficiency next to cornfields and cows, about 40 miles from the Panthers’ Bank of America Stadium.

“Playing for the hometown team,” Smith said with a voice that indicated a bounce in his step and a song in his heart. “This is what every athlete dreams of.”

Smith prepares for the season with long, sweat-drenching stationary bike rides and two-mile jogs every weekday morning. He looks forward to returning to a virus-free world where his biggest problem is tackling big, strong, elusive people.
“I try to keep self-quarantined,” Smith said. “You can’t be too careful with this (COVID-19) virus. Even if I didn’t get sick or wasn’t feeling sick, I could still pass the virus on to someone who isn’t able to deal with it as well as me.”

He cooks most of his own meals, and with the help of a nanny cares for a 7-month-old baby. He also has two older children, but for the baby, Haven Harris Smith, he is mom and dad. Haven’s mother, 26-year-old Petara Cordero, of Charlotte, was killed in a car accident on an interstate in Cleveland, Ohio, last September. She exited Smith’s vehicle after it was disabled by a blown tire and was struck by a passing car.

He admits he was close to giving up football immediately after the tragedy, but it wasn’t long before he moved forward with his usual grace and finished out the 2019 season with the Cleveland Browns.

“It hurt so much, at first, it was hard to do anything but hurt,” Smith said. “But you’re going to face adversity in life, and you have to respond to it. I’m still grinding each day now, and life is pretty normal, at least it’s the new normal. But I will be honoring Petara every time I walk on the field this season, playing for her, playing for our baby. That’s all I can do.”

Smith is 28 now, a decade removed from his glory days, when he and running back K.P. Parks were the loudest names in a group of athletes at West that ignited a 46-game winning streak and ruled 3A football in North Carolina for coach Scott Young. Smith was a remarkable athlete, probably the fastest guy on  great teams. In the 2009 Shrine Bowl, the showcase game for the best of the best in North and South Carolina, Parks scored a touchdown and was offensive MVP, while Smith, who rambled for a touchdown on a 67-yard fumble return, was voted defensive MVP.

In the Offense-Defense All-American Bowl that was played not long after the Shrine Bowl, a national showcase, Smith racked up seven tackles, including a sack, while Parks was the dominant offensive player.

In those carefree days, Smith was a man-child with a smile like a mountain sunrise and feet the length of water skis. His shooting range was 5 feet, but he loved basketball as much as football, enjoyed tearing off his warm-ups right before tip-off to reveal the scary muscles of a comic-book superhero to the opposition.

It took a little time. He didn’t redshirt. He took his lumps in the SEC as a true freshman, but he was making an impression by his sophomore season. His last two seasons for the Razorbacks, he was a standout. He had 18 sacks in those last two seasons and made All-SEC second team as a senior. He was a fifth-round pick by the Jacksonville Jaguars in 2014.

He didn’t make a major impact with the Jaguars, but he had a really productive season after he was traded to the Cincinnati Bengals in 2017. He made 26 tackles, with three sacks.

In March 2018, Smith signed a surprisingly lucrative contract with the Cleveland Browns that included a $3.5 million signing bonus. He had a solid 2018 season, played in every game and helped change a culture. The Browns moved forward from 0-16 to 7-8-1.

In 2019, he played in just nine games for the Browns, some of them after the highway tragedy, and the Browns waived him on Dec. 3. He had signed a three-year contract with Cleveland, but NFL contracts aren’t guaranteed.

The NFL is a tough business, and everyone recognizes that, but there was quite a bit of anger unleashed by Cleveland fans when the team parted ways with Smith. While he hadn’t played all that well in 2019, there were obviously extenuating circumstances. And while he hadn’t been one of the Browns’ standouts, no one is better than Smith in the locker room or in the community.

In early March, the Panthers announced the signing of Smith, who was represented by Drew Rosenhaus, one of the world’s best-known agents.

“It’s a blessing,” Smith said. “I thank Drew, I thank Marty (Panthers GN Marty Hurney), I thank the P.R. lady, and I thank everyone who made it happen.”

Smith said Rosenhaus had called him with a list of the three teams that were most interested in him — the Indianapolis Colts, the Denver Broncos and the Panthers.

“As soon as he mentioned Panthers, I got excited,” Smith said. “I told Drew that I wanted the Panthers if there was any way possible, and some good people made it happen. I live in Charlotte, so it’s going to be a pretty easy ride to work. I can’t wait.”

Smith, like a lot of North Carolina youngsters, was a Panthers fan growing up. Julius Peppers was one of his favorite players, probably because Peppers also got sacks and was good at basketball. Smith recalls his father buying 300 wings for a Super Bowl party when the Panthers took on the New England Patriots in February 2004.

Smith figures to contribute for the Panthers on the field as a backup defensive end, but, as is always the case, he’s probably going to be even more important on the practice field, in the locker room and in the community than he is on Sundays. He’s a joyous, positive presence. That hasn’t changed since high school.

“A lot of people asked me what I could bring to the Panthers, and I tell them that Cleveland was 0-16 the year before I got there and was a place where winning was a cuss word, and I helped change that,” Smith said.

Off the field, Smith’s passion now is to see an upgrade in emergency hazard lights for all vehicles. He’s convinced such an upgrade to his own vehicle could’ve saved his girlfriend’s life and could save the lives of several Americans every day.

“I’ve signed two contracts recently,” Smith said. “One with the Panthers. The other was with Emergency Safety Solutions. Hazard lights have not been updated since 1951. We are working to get every car in the world updated hazard lights.”

Smith’s goal has always been to play 10 years in the NFL. Maybe he’s going to make it.
“It all goes by fast,” Smith said. “I’m actually going to be one of the older guys on the Panthers’ defense. I’ll have to start checking for gray hairs every morning.”

Smith has not forgotten his roots.

In the spring of 2018, he came home to contribute $40,000 to the Rowan-Salisbury Schools athletic fund. He’s the primary sponsor of the preseason Rowan County Football Jamboree. He gave $5,000 to the Essie Mae Kiser Foxx charter school in East Spencer.

Then, last Christmas, he paid for hundreds of fans to attend championship night of the Dale’s Sporting Goods Christmas Classic at Catawba College.

“It’s been a journey,” Smith said. “Since I left for Arkansas after high school I haven’t been home as much as I’d like. But now here I am, signing my third contract in the league, and I can’t tell you how hard it is to do that. The best thing about this contract is that it’s brought me home.”