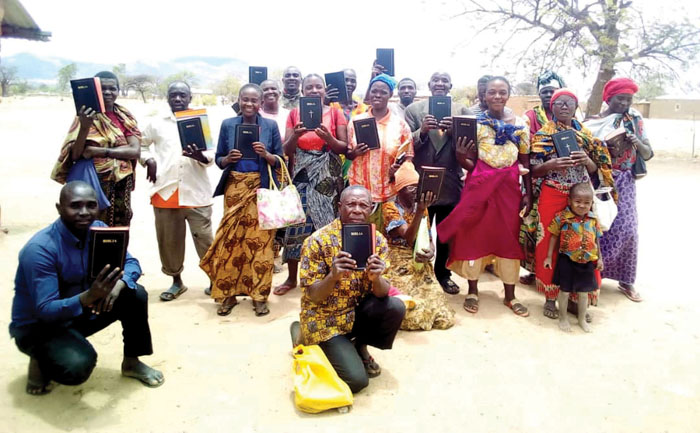 Members of a church in Tanzania after receiving their new Bibles.

China Grove First Baptist Church began the process of looking for a new pastor in November 2018 and entered into a month of prayer. The conclusion of that month began a journey that nobody saw coming and can only be explained by the direct involvement of an incredible God.

The prayer ministry at First Baptist is available to everyone, with requests often coming through their website, sidewalk prayer box or their Facebook page. A new journey began when an indigenous pastor and missionary in Tanzania simply asked, “Please pray for my ministry.” Pastor Emmanuel simply said, “We need Bibles. Please pray that God will send us some Bibles.”

When Chad Lewis, a China Grove First Baptist Church member, asked the pastor how he found the church in China Grove, North Carolina, the answer was that “he was praying one night, asking God to lead him to people who would partner with him in prayer.”

“As we began to pray, we also began to research how to send Bibles to Tanzania,” Lewis said. “The Baptist State Convention, the Bible Society and other African missionaries all said that costs for shipping and risk for theft were both too high.”

Even though others were saying “don’t do it,” church members continued to pray and moved forward. After finding several options on Amazon for purchasing Swahili Bibles, Lewis said, “We picked a random Amazon vendor and inquired about bulk pricing. This was no random choice. God was at work in the smallest of details.”

The vendor selected, World Books and Records, wanted to help — but not through Amazon. The goal was to send 50 Bibles, with a stretch goal of 100, dreading the expected high shipping cost.

World Books responded with, “Yes, we can we accommodate that quantity and we can ship it for free.”

World Books owner Nderitu Kanyogoro shared how he grew up in Kenya and now has a distribution warehouse close enough to Tanzania for shipping Bibles, saying that when he committed himself to Christ he didn’t have a Bible and could not afford one.

“The student who witnessed to me gave me his only Bible as he came from a very poor family as well,” Nderitu said “I felt the love and the pain of receiving the word of God from my brother. Three weeks later, I witnessed to another student who received Jesus as his Lord and Savior.

“He too had no Bible and then it was my turn to give up mine. I can’t start to explain the joy I felt but even more so, the pain of not having what had become my sword and my shield.”

Nderitu continued, saying his mother visited him at a boarding school and gave him the equivalent of about $2 for pocket money.

“The following weekend, I walked a whole 40 miles to the nearest bookstore to buy a Bible, never mind that I had no more money, he said. “My mom had told me that the 20 shillings would be my bus fare to go back home when the school closed. After school closed, I had no bus fare, but I had myself a Bible. God provided me strength and grace to walk a whole 50 miles back home. I was tired but I had a wonderful time to converse with him.”

After moving to the U.S. as an adult and becoming a successful scientist, Nderitu asked only for the opportunity to help provide God’s word to more people. World Books and Records was born.

“That is why I spend my resources. I have donated to many, and the vast majority do not even know about,” Nderitu said. “It means so much to me to know that a Bible is going to someone who couldn’t possibly afford one, and for that one person, it is nothing short of a miracle.”

With something amazing in the works, China Grove First Baptist Church agreed to collect money during the month of December and watch God work. The church was able to purchase 246 Bibles instead of the original 50.

“God was certainly up to something big,” Lewis said. “Nderitu was so moved that he personally contributed 54 more Bibles so that 300 shipped.”

Pastor Emmanuel was beyond ecstatic. With most villagers unable to afford a Bible, his church and the village came together for an entire day of worship and celebration to thank God for answering their prayers. Many now had their very own copy of God’s word.

World Books and China Grove First Baptist Church continued to get updates from Pastor Emmanuel on how the Bibles were making a difference.

China Grove First Baptist Church continued to pray. Church members have been involved with mission work in Vermont and New Hampshire for over seven years. One of those partner churches, Crossroads Community Church, joined in as did non-church members in the community.

From the time the first Bible was shipped to Tanzania, a little over a year ago, there have been over 2,000 people in the Tanzanian villages who now have a personal relationship with Christ. Many of those are still without a Bible, but recently, China Grove First Baptist Church sent more than 250 additional Bibles.

For more information on the Bible program or to send your prayer request, contact China Grove First Baptist at 704-857-5415 or at pray@chinagrovefbc.com