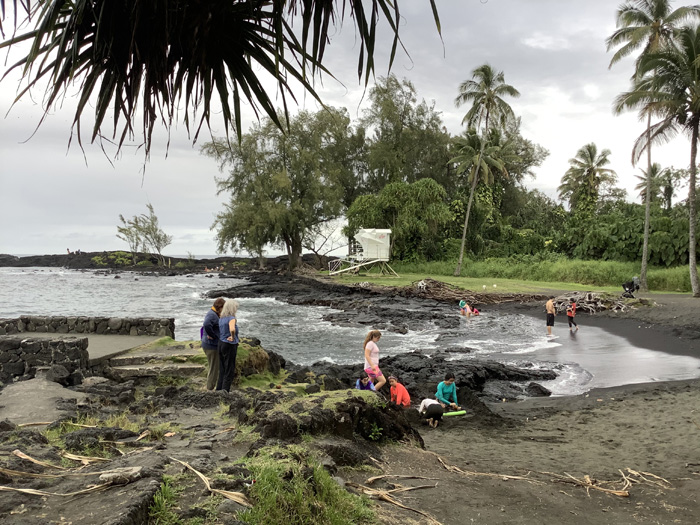 For the second time ever, David Freeze walked on a black sand beach. This was at Richardson Ocean Park in Hilo late Friday. The first time was in El Salvador more than 30 years ago.

I had been curious for the last two nights about a bunch of tall palm trees with Christmas lights wrapped around them.

After dark last night (Friday) and in the drizzling rain, I went for a closer look today (Saturday).

Apparently a local sleep doctor has his office and house together, and decorated the biggest trees in his yard. I walked up and tried to take a few good pictures and a woman came out to say, “How can I help you?” I told her I was admiring the trees and lights. She responded, “Oh, no problem, please enjoy.”

Hawaii seems full of this attitude. So friendly and happy! I am finishing this day while having a blast. A lot of good things fell into place today and I will recap them.

Back from a much-better-than-yesterday early run, I saw another runner coming in and he wanted to know the time. I told him and he said, “I’ve got to hurry to meet the bus.” I did also and told him so. About 45 minutes later, after packing and leaving Arnott’s Lodging and Adventure, I was at the bus stop and my new friend was already inside when it stopped.

These are big city buses with cool bike racks on the front. After a little coaching, I learned how to mount mine and got on the bus. My fare was $2 to take me, two big bags and the bicycle to the other side of the island, probably about 85 miles on the route we took. If I lived on the Big Island, I wouldn’t use a vehicle much. The bus is so convenient and amazingly cheap.

Once loaded, I talked with Ben, the runner from this morning. He’s into martial arts and is an actor, but he’s spending multiple weeks in Hawaii to finish a book. We parted ways at the bus exchange, promising to keep in touch.

Next came the bus ride over some of the same area that I cycled and then the “Saddle Road” back to Kona. I had been told not to ride it because of tight turns, little shoulders on occasion and high traffic. Crossing the center of the island, I was amazed at all the higher altitude grasslands and then more lava fields. Beautiful but barren, it was the shortest way to Kona and I’m glad we saw it by bus. That bus driver used to drive a truck in Charlotte.

First and most important when back to Kona was to return my rented bike to Bike Works. The fee came out $10 cheaper than I expected because I kept it for an extra two days, meaning the per day rate was lowered. My pedals and I are headed home, but I hope to never see that seat again.

The bike did a great job and I didn’t have to pay the $2,800 credit card bill for not returning the bike.

By this time, the rain was falling pretty well, but I had some shopping to do: a few gifts for home and some food for the evening.

While shopping in the ABC store for both things, I didn’t see any liquor. I think its a convenience store chain that doesn’t sell hard alcohol. There are at least three of these stores within about a half-mile walk in downtown Kona. They are packed every time I go in.

Next came the farmers market where I bought the smallest bananas and some fresh pineapple, plenty of each for $4. I wanted one of those miniature teak surfboards but passed this time.

With all this done, I had a mile more to walk to my home for the evening, Kona Tiki Hotel. I am directly on the ocean, listening to the waves crash against a rock wall about 30 feet from the patio area of my room. This is so cool! I even saw a humpback whale surface a couple of times as he or she passed by, remembering from Captain Dan’s Whale Watch that humpbacks like to cruise close in.

Small boats keep passing by, too, and it could rain again soon.

I will have one more update from Sunday after my last morning here.

David Freeze is a Salisbury Post contributor who is biking in his 50th state, Hawaii.

Quotes of the week: ‘Not lock yourself in your…