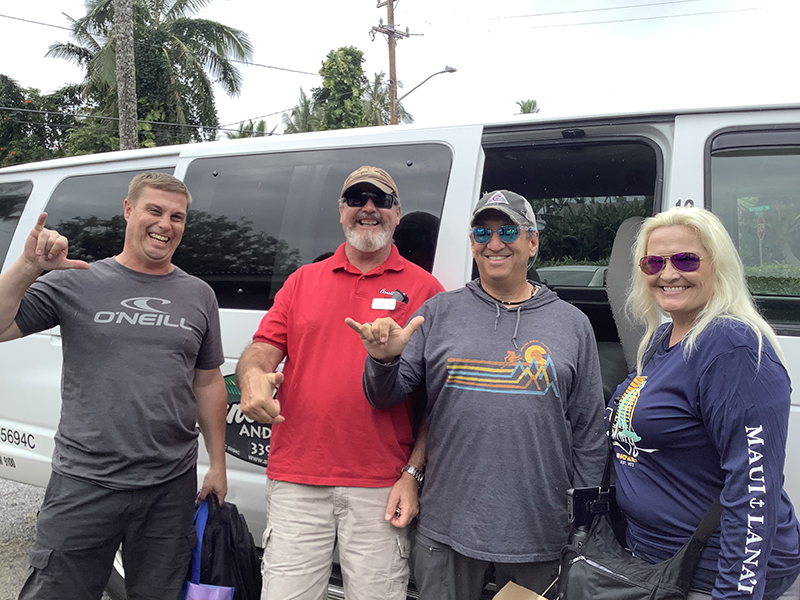 This was Freeze’s volcano tour group on Friday from Hilo. L to R, Jerry from Calgary, tour leader Ed from Hilo, Bob from Belize and Julie who’s a stewardess with Southwest.

Friday didn’t have much bike riding here in Hawaii. About 6 miles total, which seems like a paltry amount. I wanted to take a good tour of Volcanoes National Park and explore some in Hilo on my last full day in the city.

I did take time to run a little this morning and biking has stiffened my legs. It was more of a relaxed morning because I spent my first night at what I call “my palace.” I have had some good places so far and no bad ones, but Arnott’s Lodging and Adventure was my best choice in a long time.

My room is more like an apartment. It has a full kitchen, a huge bathroom and a big open area just inside the door. I haven’t heard a peep from anyone else, and the lodge is staffed from 8 a.m. to 8 p.m. at a covered reception area outside. There is so much room. It’s right next to a beach state park and within 2 miles of a half dozen more beaches or park areas.

I called another motel on the way into Hilo Thursday, and the owner told me that I sounded like someone who would enjoy Arnott’s Lodge. Informed that the lodge was in the beach area, I knew where I was going.

The lodge leads tours all over this side of the Big Island, and I just happened to pick the right day for the Volcanoes National Park tour. I spent way more for the tour than the room per night. I am very happy with the pricing and quality of both. So, if you want a reasonable place to stay in the Hilo area, look for Arnott’s Lodge. Other lodging and prices in general are very high.

Early his morning, I joined three other tourists and a guide to see and hear about the area on the way up to Kilauea, an active volcano. We stopped first to see Mauna Kea,  rising beautifully across the Hilo bay, complete with snow and some huge telescopes on the summit.

We drove past huge Banyon trees, one planted by Amelia Earhart. These trees, a product of the rain forest, have been able to cover as much as three acres when never trimmed.

Tsunamis have hit Hilo twice — in 1946 and 1960. There are signs around for evacuation routes and tsunami safe lines, meaning that the water shouldn’t reach that high. Scientific equipment in the Pacific Ocean will tilt off local authorities if another tsunami approaches, with as much as five hours to spare.

We stopped briefly at Rainbow Falls, inside Hilo’s city limits, then headed west about 30 miles to Volcanoes National Park.

There currently is no molten lava flowing, but Kilauea is just sleeping since its last eruption in 2018. The lava flowed in tubes from as much as 12 miles underground, causing massive damage but with no deaths. All homes on the Hilo side of Hawaii’s Big Island have a volcano rating with the lowest number paying less for home insurance. Real estate is cheaper in Hilo than almost anywhere else in Hawaii because of the volcano threat.

We walked to the edge of the caldera, the site where the volcano erupts. Steam continues to rise all over the massive area, which reminds me of a much more dangerous Grand Canyon.

Wild pigs used to run wild in the area and rooted out holes where mosquitoes bred well in the numerous rain showers. The park has been fenced in and the wild pigs removed.

I haven’t seen a mosquito yet.

Our group was able to walk through a lava tube approximately 20 feet in width. It was dark enough that the pictures were terrible, and I hit my head on a rock. The rock survived. Scientists continue to monitor the area and expect to be able to predict the next eruption.

Back to Hilo. We stopped at huge outdoor Farmer’s Market. Massive amounts of fruit and some clothing were on sale. I went in a grocery store and was found that most staples were about 40% more expensive than what we have.

When the tour ended back at the lodge, I rode around the area to check a half dozen beaches. All were beautiful in their own way, especially the one black sand area near the Richardson Park, where surfing was being enjoyed.

Tomorrow (Saturday), I will leave Hilo on a bus back to Kona to return the $2,800 bike. Not sure what Saturday will bring, but I will make the best of it.

David Freeze is a Salisbury Post contributor who is biking in his 50th state, Hawaii.