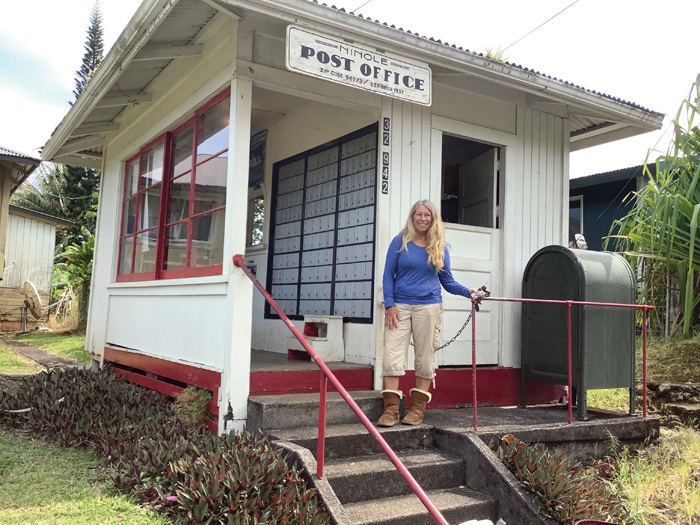 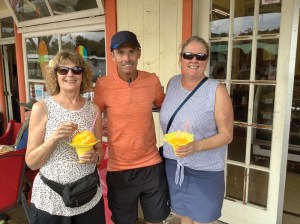 David Freeze met Patty, left, and Jenny of Livermore, California, at Mr. Ed’s Bakery in Honomu. The women and Jenny’s husband, Rick, wanted to know all about Freeze’s ride.

Today (Thursday) felt more normal with a great mix of people and scenery. And some challenges and surprises too.

To begin with, my butt is doing better with the different bike seat. I’ve learned to raise up just enough when crossing those dreaded bumps. Next time, I will bring my own seat. I had an agenda after another wonderful night in good hotel, the Hotel Honoka’a Club. It rained most of the night and loud birds were chirping constantly. I loved it all.

First, I wanted to start down the coast toward the town of Hilo, Hawaii, and explore along the way. The road shoulders for the most part were plenty wide. Traffic was moderate and courteous. Being on a new bike makes me unsure at times, but all turned out well. First up, was a stop at Donna’s Cookies, a fast-moving, little cookie factory right on the highway.

As soon as you enter, they give out samples. I chose peanut butter and got 10 cookies for a great price. The boss let me take a picture, but all the ladies got serious and looked down instead of laughing as they had been.

I moved on and just happened to ride by the smallest post office I have ever seen. It was about an 8-foot square with one operator inside. I met Mary Jo Stevenson coming out and we struck up a conversation across the road that soon moved to just in front of the building. Mary Jo is a local pastor and former Ironman Triathlon competitor.

Mary Jo said, “At one time, this was the smallest PO in America and the tour buses used to stop often. Not sure if it still is.”

After that, I had my heart set on the Akaka Falls State Park. Mary Jo told me it was uphill. Was it ever at about 400 feet in elevation per mile for nearly four miles.

I read about some theft occurring from parked cars and wondered what I could do with the $2,800 bike. I got the one park attendant to watch and all turned out well. The falls are spectacular, at 442 feet, which doubles the height of Niagara Falls.

I got some great pictures and rocketed down the hill to Mr. Ed’s Bakery in the community of Honomu. I met Rick, Jenny and Patty from Livermore, California, amid a great conversation of cycling and my 50th state. Rick’s group sampled most everything in the store while I got a blueberry and a lilikoi turnover. Lilikoi is made of passion fruit.

I am about to eat it now. I did sample the taste and loved it.

Next up was decision time about where to spend the night in Hilo. I chose Arnott’s Lodging and Adventures, where I have a very unique room. There are two other bedrooms in this apartment but no one will use them, leaving me with a large bathroom and kitchen for my own use through early Saturday morning. Gloria at Arnott’s did a great job of taking care of me and it is from here that I will take a van tour of the Volcanoes National Park on Friday.

Then will come free time in the afternoon in Hilo. I am on the beach and have been directed to a nearby black sand beach and rainbow falls.

I’ll be on the bike again for these places and more. Tentatively, the bike and I plan to return to Kona early on Saturday morning.

Today was the best day yet in Hawaii! I loved it all, except that terrible climb, or maybe the terrible climb just made all the rest seem better.

David Freeze is a Salisbury Post contributor who is biking through his 50th state, Hawaii.

Letter: Trump will take supporters with him