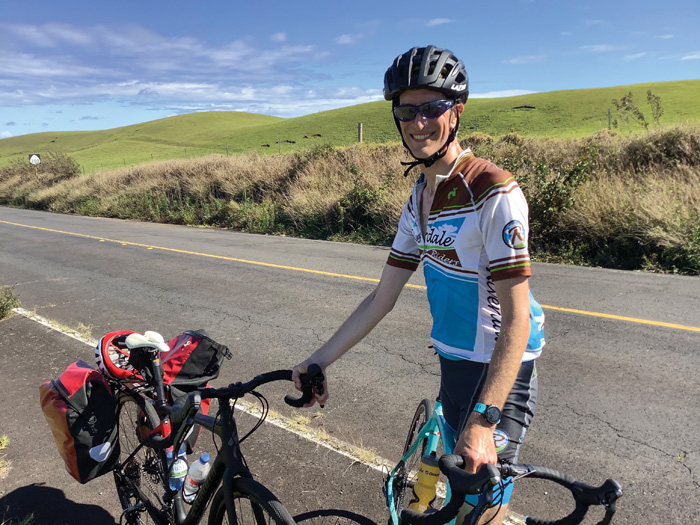 After having seen hundred’s of cyclists, David Freeze met Stark Draper from Toronto on Kohola Mountain Road between Havi and Waimea. The cyclists rode together and talked for a brief period.

Following the best sleep yet since I arrived in Hawaii, I had big plans for today (Wednesday).

After a healthy meal the evening before in Hawaii, I wanted to climb the Kohala Mountain Road and keep rolling for close to 80 miles and make Hilo late this evening. Nothing like that occurred.

I rode back into the community of Hawi and headed up a step grade immediately as I turned left on Kohala Mountian Road. Pedaling regularly at 8-10% grade, I was soaked and pouring sweat immediately. I needed 22 miles to make Waimea this way, but a fast route of 30 miles back the way I came the day before would have included lots of downhill.

Still, I wanted the hilly route. Or I thought I did. I found beautiful hay, cattle and horse farms with amazing views of the Pacific Ocean far below. I also found lots of traffic, many tight curves and almost no shoulder.

The highlight of the morning was meeting Stark Draper from Toronto. He caught me from behind with 1,500 feet of elevation to go. We rode together for a while and then made photos before he headed off. In my delirium, I am pretty sure that Stark has been delayed from going back to work by the coronavirus.

Once in a while, I just have nothing, and today was that day. A constant slug uphill dragging along the extra 50 pounds of gear didn’t go well. Once over the 3,500-foot pass, I found mostly an easy coast downhill into Waimea, a good sized town for the Big Island.

My first stop at a convenience store was for two little ice cream containers and a huge bottle of water. All that sweat and effort left me to try and refuel like I had before in similar times. I gave up on the idea of getting to Hilo today. So, I called a cheap motel in Waimea suggested by Siri on my iPhone and got a price of $222 for tonight (Wednesday). Then, I asked the proprietor of the convenience store what I could expect ahead and was told no motels existed until I made Hilo.

I asked two residents while they pumped gas, and they both agreed. An inebriated customer told me there was some but he couldn’t remember where. The two guidebooks I have been using listed none.

Intent to head for Hilo on a crappy day, I stopped once more at the Shell station and asked someone named Rae. She didn’t know, but suggested I asked Siri. My pronunciation of Hawaii names got Rae laughing. But we found one — the Hotel Honoka’a Club. I called ahead and headed that way.

Suddenly, my energy was back and a slightly downhill road helped a lot. Just 90 minutes later, I had a room in a 1926-era hotel in one of the best little towns I have come across. It was maybe the best since several Idaho towns and their gunfighter hotels of the late 1880s. There were no TVs and, just like last night’s motel, no air conditioning or heat. But who needs either in Hawaii? It has been raining since I got here. It is pouring now.

The owners, Jory Watland and Annelle Lee, are fabulous and shared lots of information and a very fair price for the room I got.

Honoka’a was a sugar production town just following the Civil War. It continued until 1994. Now, all those old town buildings have found life in more modern touristy businesses. I walked around town just before the heavy rain came and loved it all.

Tomorrow (Thursday), I plan to make Hilo while stopping in the other little towns on what’s reportedly one of the most beautiful  coasts anywhere in Hawaii. The Akaka Falls State Park is on the way. I have booked the bike until early Saturday morning, so there is still much to do.

I have been trying to rehydrate this evening (Wednesday) as the heavy rain continues to fall. I’m happy that I am not out riding in it. While not the day I expected, it was still a good day and I am ready for less up and down riding tomorrow.

David Freeze is a Salisbury Post contributor who is cycling through his 50th state — Hawaii. Email him at david.freeze@ctc.net.