David Freeze: First day of biking in the books 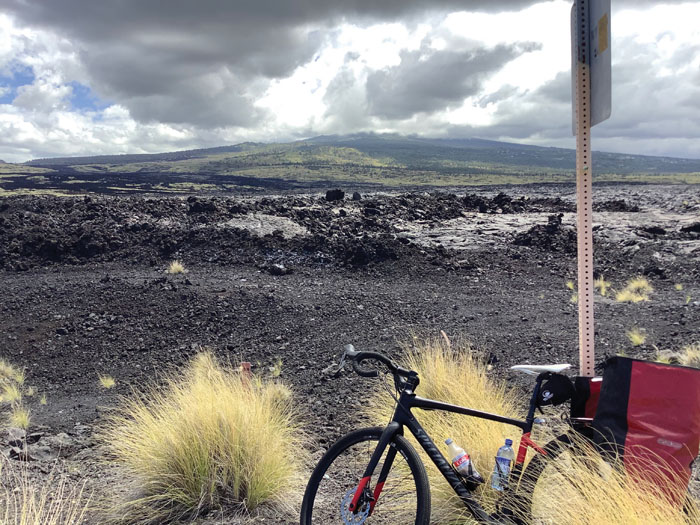 After much deliberation about where to ride on Tuesday, Freeze picked up the rental bike to ride 62 miles. That included the first half the Ironman Triathlon course and on through the town on Havi where he spent the night.

I am at the Club Hotel tonight (Tuesday) on the eastern side of Havi, pronounced Haavee, in Hawaii.

I just took my first-ever outside shower not associated with a campground on one of these trips. I have this great little throwback room in a motel leftover from the 1950s. There are two bathrobes hanging in the room and my bathroom is right beside my room. The shower is just underneath it and accessed from the yard. It is the first room that has been reasonably priced on the whole trip.

I ran 5 miles this morning and checked out of the Kona Beach Hostel. I gave it rave reviews for everything, except a $16 charge if you don’t stay a two nights back-to-back. I will probably go back later in the week.

A rental bike came from Bike Works in Kona — another good deal if I don’t wreck it. It is a $2,800 carbon hybrid bike, supposed to be heavy enough to carry the 50-60 pounds I’m lugging along.

Once the bike was set up with bag racks, the mechanic sent me outside to try it. It felt very awkward, especially since they had me test it out on a narrow and sloping parking lot. Once I got it all loaded, I still walked it through a strip shopping center parking lot, slightly afraid to try the bike with the load on it until I was on level ground.

All worked out well, but I am still on the hook if I wreck it. They made me sign a $2,800 credit card receipt, just in case. I brought my own pedals. I should have brought my own seat, too.

The seat is terrible so far. I’ve been applying chamois butter all day. Day No. 1 is in the books, and I am probably going to use the bike for at least three.

I traveled about 59 miles today. Several highlights occurred today. I stopped at my first convenience store on the way out of Kona and saw the highest prices I have seen yet: a $3.99 bagel and one of those little banana nut breads for $8.99. I used the bathroom and got away from there fast.

After miles and miles of riding through the lava fields, a windy area that makes up most of the Ironman Triathlon bike course, I saw a big crowd gathered around a blue enclosed trailer. A dozen people were ordering or waiting to pickup their malasadas, an apparent special donut unique to Hawaii. It is one big puff of pastry with the topping still hot in the middle. When I ordered, I asked how long to make two Bavarian cream donuts and one of her mango lemonades. I had only been on the road for 30 miles and needed a boost.

The operator whispered that she would serve me out the back window while the others waited at the front.

It is an almost-never-ending, 20-mile climb coming into Havi, and I was worn out when I made the top of the hill and the triathlon turnaround. The cyclists make great time on their way back through the sea level town of Kawaihae and back to Kona.

While in Kawaihae, another wonderfully named town, I asked the clerk at a store if she knew of reasonable nearby hotels. She gave me two names. One was closed for the day at 3:30 p.m. The message said, “We’re open to 4 every day, but it is Hawaiian time if we have already closed.”

After checking into this wonderful Club Motel, I rode back uphill to the Takata grocery store. Prices were reasonable but not a banana could be found in the store. I did buy a bean-filled Anpan, another Hawaiian treat.

I am beginning to find that the Hawaiians are a very happy group when away from the town of Kona. One guy smiled and laughed when he gave me directions, and the Havi police chief smiled a lot when we talked about my 50th state cycled.

My goal has been completed, but it’s back on the saddle again tomorrow. I plan to go over the mountain into Waimea and then make part of the journey toward Hilo.

Hilo and Juno are the real towns on the Big Island, and Hilo is the gateway to the Volcanoes National Park.

Join me again tomorrow when we see what is special about Wednesday’s ride.

David Freeze is a Salisbury Post contributor who is biking through his 50th state, Hawaii.

Rowan did its part for WWII, sending scrap, protecting…