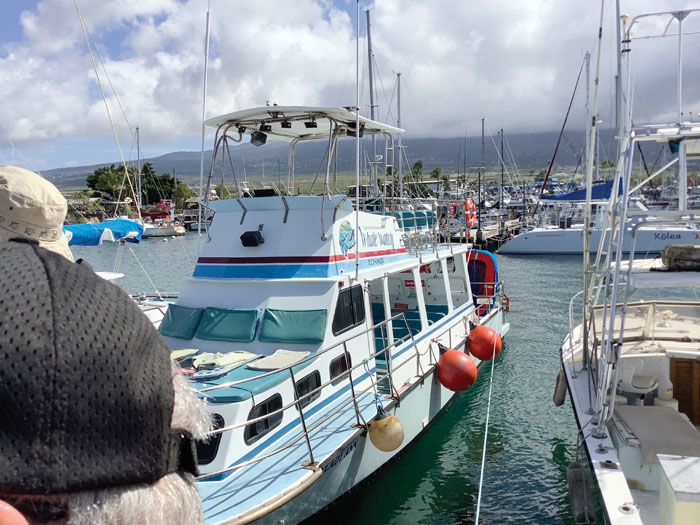 David Freeze was the first one to take the top viewing platform on Captain Dan’s Whale Watch boat.

After 23 straight hours of mostly being awake, I went to bed in Kona, Hawaii, thinking I had a pretty good plan.

My goal for the week is to spend at least three days riding, a day mostly trying to see whales and a day at the Kilauea volcano. I also want to see as many sunsets as I can while on the western side of the Big Island. I got one great Sunday night.

Tonight (Monday) is drizzly and cloudy. There is a big luau at the resort I stayed at last night, so I hope to check that out.

I started this morning with a 5.5 mile run, part of it on the Ironman Triathlon course. I read that a Chinese billionaire owns the rights to the event after paying $900 million for it. Lots of runners and cyclists seem to be out on the course daily. I already recognize the street and road names and some of the locations I have seen on TV.

Next, with an idea toward saving some money in this very expensive area, I walked more than 4 miles to Captain Dan’s Whale Watch boat leaving out of Honokohau Harbor. We left with 40 people and three more crew for a “three-hour tour,” but for all you Gilligan fans, we all did come back.

For two hours, we road out to deep water, about 4,000 feet. After seeing nothing, we came back in the area near the harbor where a humpback whale was sighted. Adult humpbacks, as big as a school bus, have an amazing story. They live near southern Alaska for most of the year, then they migrate to Hawaii to breed, during which time they don’t eat. The mother loses as much as five tons during the January to March period. Those whales travel as much as 6,000 miles a year. Once pregnant, the humpbacks return to Alaska to recover weight before returning to Hawaii one year later where the baby whale is born.

Other whales in the area are pilot, beeked, sperm and several more. But humpbacks are rockstars, the ones tourists want to see.

Luckily we did spot mother and child when then came up for air probably a dozen times. At least five other whale boats and a big dive boat all followed them too for about 30 minutes until they left the area.

It was a wonderful time on the water, upper 70s and partly sunny. The water just off the land mass is a deep blue and clear to more than 100 feet down. The captain asked those onboard to keep looking down because whales often pass under the boat.

While whale watching, we were treated to drinks, Hawaiian fruit and finally, lavender scented hand towels. I tried to look like this wasn’t my first time. I was fascinated on my first ever whale watching journey. I’ve always wanted to do it, but just like the July 4th rodeo in the Badlands, those items have been done.

I walked back to town, totaling 13 1/2 miles for the day and saving about $40 in Uber fees. It drizzled on the way back and is now very cloudy. I am staying in the Kona Beach Hostel tonight and possibly tomorrow night as well. I have a private room and a bathroom next door. It’s very nice so far, but let’s see what the night brings.

My plan is to pick up the bike tomorrow and either ride north or south. North is the Ironman course. South is another interesting area with black and green sand beaches. South also puts me nearer to the Volcanoes National Park.

Gas here is about $3.81 a gallon. No plastic bags are allowed, and I am finding ways to afford things. ABC stores have lots of other things, including decent-priced sandwiches and very affordable water and snacks. But I did see a $28 t-shirt today.

David Freeze is a Salisbury Post contributor who is biking through his 50th state, Hawaii. Email him at david.freeze@ctc.net.

Editorial: Add to training before graduation if diploma is…