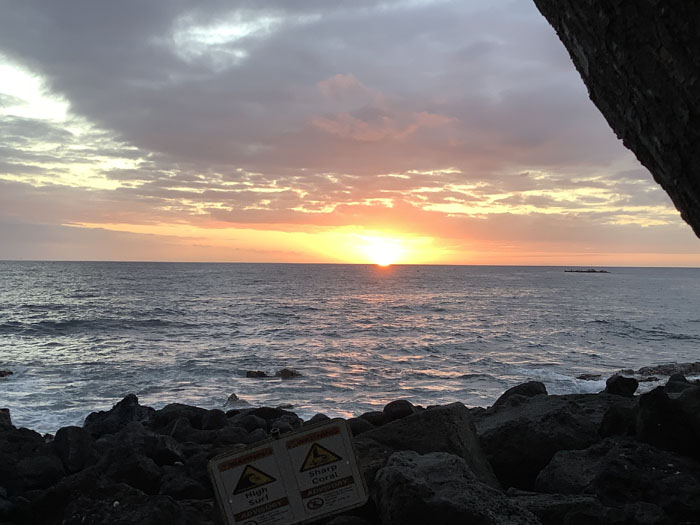 David Freeze flew for more than 10 hours to catch this sunset at Kona, Hawaii, on Sunday before beginning his latest cycling adventure.

What began in 2012 as just a first cycling adventure into West Virginia, will reach a major goal soon.

That first trip began auspiciously. I loaded some heavy gear on a mountain bike to ride for a 3-day trip and promptly fell off before I even left the parking lot. On that day, I began to learn new things about how to travel by bike. I’m still learning.

I arrived in Kona, Hawaii on Sunday and will spend a week cycling and exploring the Big Island. The flights to Phoenix, Arizona, and Kona both went well. The temperature in Kona was 80 degrees at 4 p.m. Colors are quite vivid here. Monday will include a three to four hour boat ride in hopes of seeing whales that migrate to Hawaii. I have already seen a wild goat and a mongoose. Both are common, along with wild pigs.

With 49 states completed, I’ve been planning for Hawaii for months, but now that I’m here, there is still much to decide. Arrival in Kona on Sunday afternoon was after 14 hours of travel. Lots of flight time and more opportunities to plan. As always, this will be a solo journey. A wrong turn, a bad choice or a bike to repair will be my responsibility alone.

Here’s what I know: Tentatively, the big things on my bucket list will all be found on this one island. I want to ride the real Ironman bike course, all 112 miles of it. Whale watching on a boat should happen, along with a journey to the peak of Kilauea, one of the world’s most active volcanoes. I know that crazy beautiful waterfalls and beaches are accessible, and I plan to see lots of little towns as I ride around most of the island. The Big Island is a larger land mass than if all the other Hawaiian Islands were pulled together.

My regular bike won’t make the trip to save on the high cost of shipping and packing. I booked a sort of hybrid mountain bike that can be used on the road. The big benefit of using this bike is the fact that I can still carry my gear. A lighter carbon bike couldn’t carry the weight, and there is no way to mount the bags.

The reason for the bike choice and need to carry at least some gear is that I have no idea how the week will develop. I’ve got the bike for three days and can extend that. As always, a plan will develop. Some camping might be involved. The motel rates are so high here that one campground offers a completely set up tent for $40 and that is starting to sound good

I have been devouring all the information I can on what to expect.

Here are just a few highlights: Hawaii doesn’t do daylight savings time, and I will be five time zones west of here. Alaska was four. The Kona side of the island will be warm and dry during my stay and it is also the best side to see whales. The other side, around Hilo, is rainy and cloudy nearly every day. Temperatures are similar on both sides, with highs in the 70s and lows in the 60s.

The Hilo side is the best gateway to the Volcanoes National Park, where I hope to spend most of one day. Kona is dry, touristy and has the lava look. Hilo is more tropical with plenty of lush green areas.

It didn’t take me long way back in 2012 to understand that these trips will be about the people I meet. There will be some unforeseen challenges and the overall cost will be similar to my whole trip from Nevada to Alaska last summer. In other words, the guidebooks suggest that I not be surprised at very high prices. As always, I will still work hard to find deals and won’t be afraid to ask for them. I have also been told to expect a certain laid back response from locals, sometimes called “island time”.

The big elephant in the room is the coronavirus. What effect will it have on the trip?

I won’t live in fear and will always do my best to stay safe, but the excitement is building as this adventure gets underway. The complete daily updates with photos will be published once again be published in the Post.

So, with that, send your prayers and follow along. As always, Lord, ride with me today. There is another adventure just waiting around the next turn.

As always, feel free to e-mail me at david.freeze@ctc.net.

David Freeze, a Salisbury Post contributor who has biked across 49 states is biking across his 50th state — Hawaii.